Arnold & Son launched the UTTE model. It stand for “Ultra-Thin Tourbillon Escapement.”In fact, you could say that the UTTE was a major part of Arnold’s rise to prominence as a small, high-end Swiss brand.

The UTTE movement is something to behold: it’s just 2.97 mm thick. Cased up, the watch is still only 8.34 mm thick. It has a 42-mm-wide case and a dial that leaves plenty of open space so you can admire the workings of its flying tourbillon, which rises above of the dial at 6 o’clock. 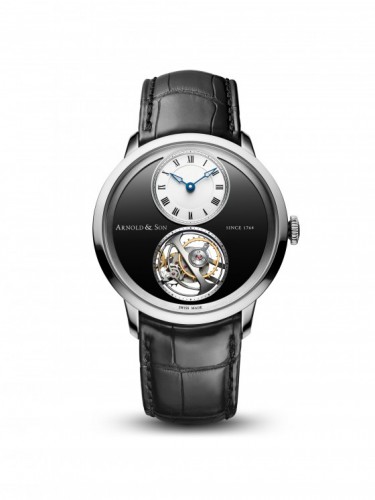 Until now, the UTTE has only been available with lighter, engraved dials: a guilloche, for instance, or a wave pattern. Now Arnold & Son is introducing three new versions, each with a fresh look for the dial. 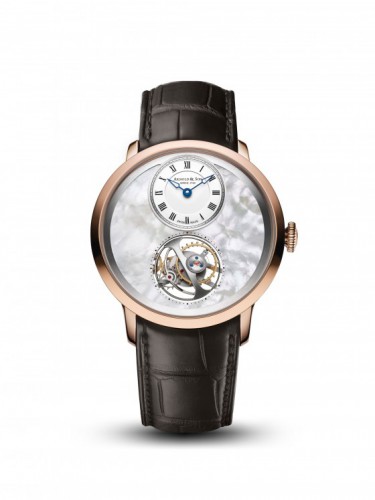 The third new UTTE take a different tack. The opaline dial is combined with black lacquer, creating a sharp contrast to the white background of the hour/minutes display and to the transparency of the tourbillon escapement. Both this version and the black mother-of-pearl have palladium cases and hand-stitched black alligator straps. Both the palladium and the rose-gold cases have been used previously on earlier UTTE models.

All versions of the UTTE use the brand’s A&S8200 manufacture movement. It is a finely finished manual-winding movement in nickel silver with rhodium treatment. By itself it has a diameter of 32 mm; the tourbillon cage is 14 mm in diameter. The movement beats at 21,600 vph. It has a 90-hour power reserve, brought about by two mainspring barrels. 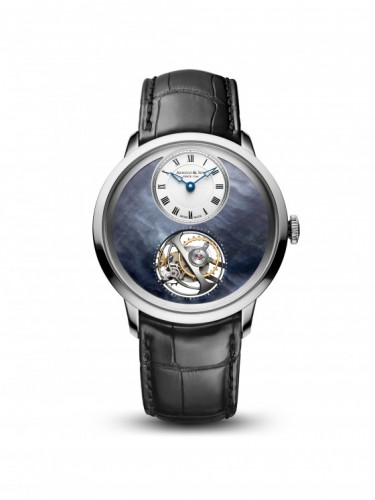