Audemars Piguet Jules Audemars Tourbillon Openworked watch may be is the most beautiful skeleton watch which released in this year’s SIHH.

SIHH 2016 sees absolutely no shortage of skeletonized watches. It was very clear a few years ago that like “ultra-thin” watches, skeletonized watches were experiencing or about to experience a major surge in new products. That surge is here, and my only hope is that at least some of this new generation of hand-decorated skeletonized watches end up being priced in the $10,000-and-under range. With that said, containing copious amounts of hand-decoration and a tourbillon-based movement, the Audemars Piguet Jules Audemars Tourbillon Openworked is resolutely a timepiece for the upper-end price segments. 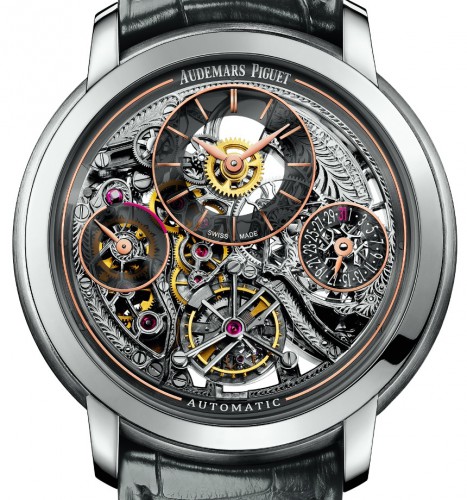 This combination of an operworked dial with a skeletonized and engraved movement makes for something truly special. With that said, one should not discount the effort required in making the timepiece actually function as a legible wrist watch. Over the movement is a sapphire crystal disc which is for the most part transparent, but given applied 18k pink gold rings and hour markers, as well as anthracite smoked regions to enable legibility on the various subdials. The only sections of the dial which are truly open to the movement are a central ring in the upper subdial which indicates the hours and minutes, as well as the exposed window for the tourbillon.

The in-house-made Audemars Piguet calibre 2875 automatic movement is produced from 268 parts operating at 3Hz with a power reserve of 54 hours. You might notice that conspicuous lack of crown on the case, but Audemars Piguet intentionally designed the Audemars Piguet Jules Audemars Tourbillon Openworked with a perfectly symmetrical case that includes a “hidden” crown which is inset to the side. With that said, the watch is only water resistant to 20 meters – so I’m just going to say that if you have one of these, please don’t get it wet. That means someone else is doing the dishes. And don’t forget to bring a soft pillow with you wherever you go so that you can remove your watch and set it on the pillow each time you are required to wash your hands. 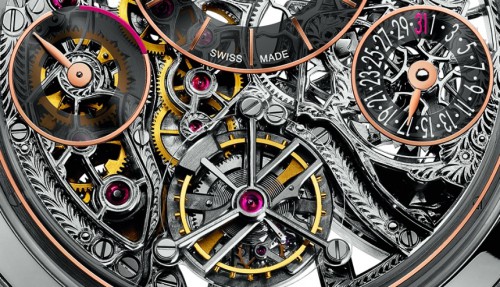 To add to the prestigious nature of this watch, Audemars Piguet has produced the 41mm-wide case in solid 950 platinum. I have to say that it is a bit surprising how much platinum are showing up in watches at SIHH. For a market that is yelling for more steel watches, I find it interesting to see brands also focus on producing timepieces in the most expensive of metals as well. Then again, for a skeletonized and engraved Audemars Piguet tourbillon, would you expect anything less?

This Audemars Piguet Jules Audemars Tourbillon Openworked is certainly the type of watch I like to have out there for people to aspire to perhaps owning someday. 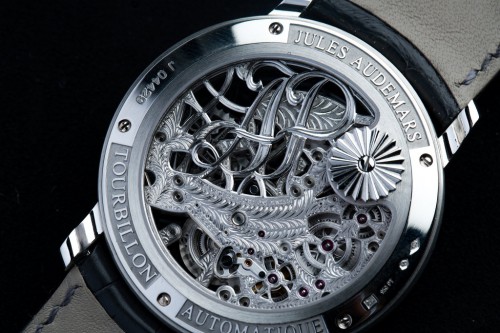