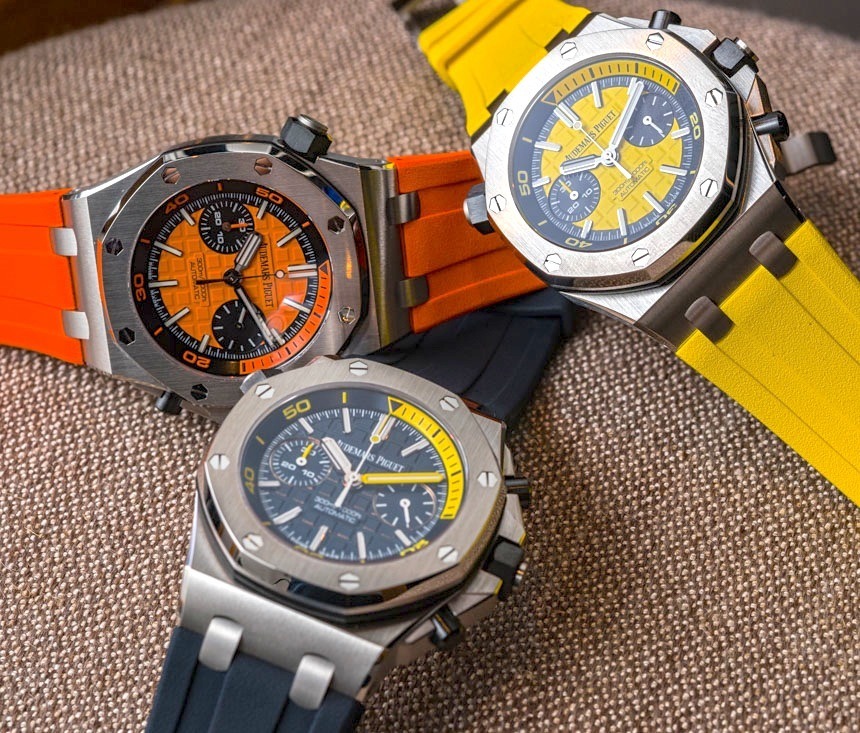 There are some watches out there that, one might feel, appear to have always been around. The Audemars Piguet Royal Oak Offshore Diver Chronograph works so well as a natural extension to the Diver collection that, to me, it is certainly such a watch. A couple weeks ago at SIHH 2016, Audemars Piguet finally enhanced their “ROO Diver” – originally released at SIHH 2010 – by adding a chronograph function to it. Do the math, and you’ll find that It took six years for the brand to make the first considerable, major update to this collection. To make up for that lengthy wait, the Le Brassus-based manufacture premiered not one, but four different color options. Here’s our hands-on look. 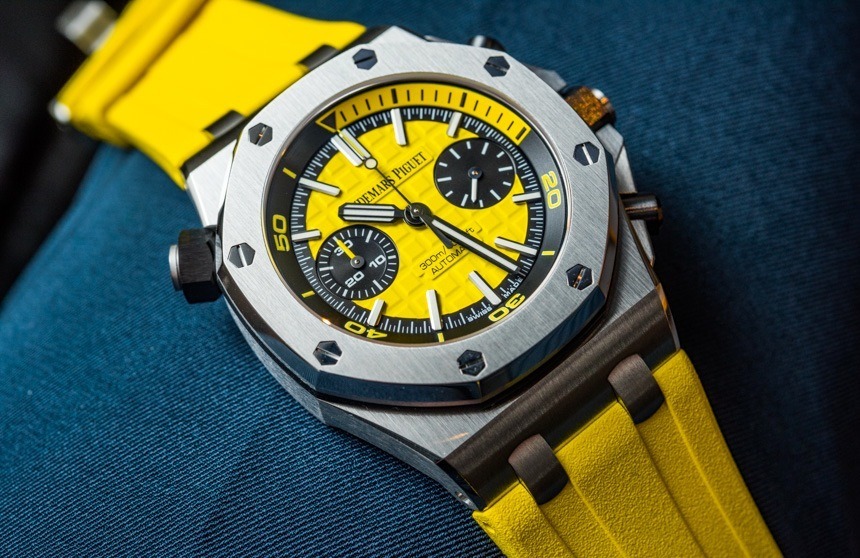 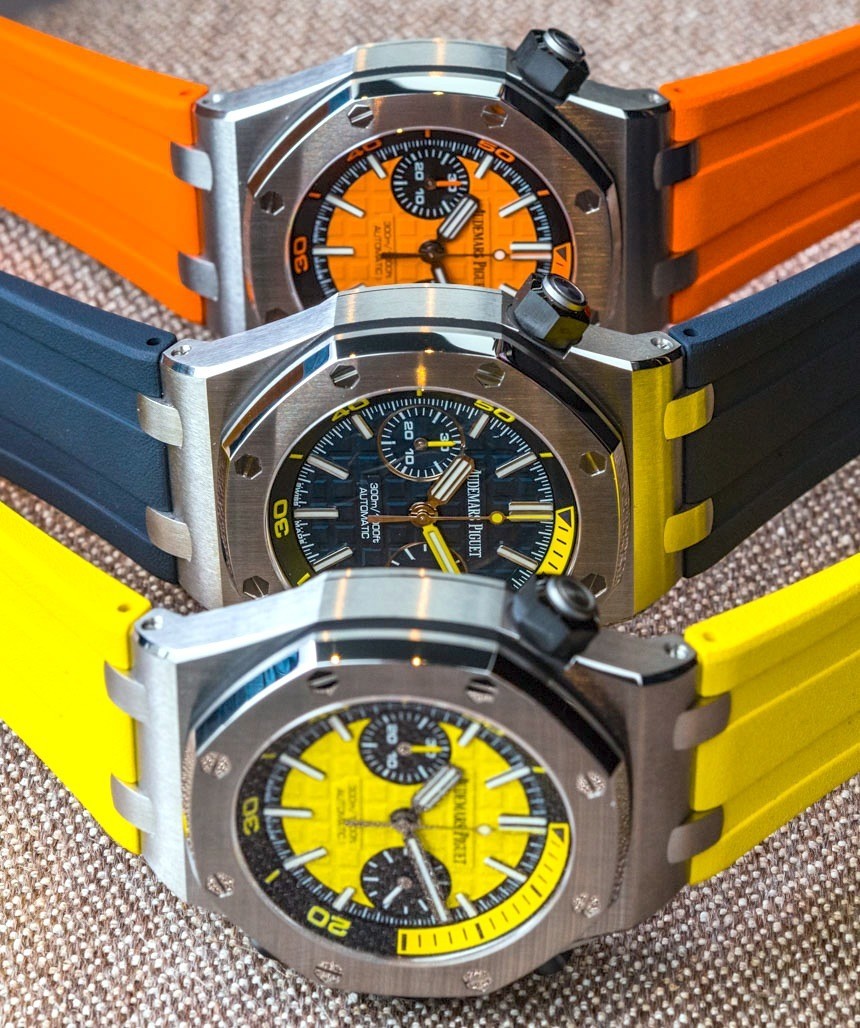 In 2016, the luxury watch industry (and many of its peers) are still in a phase where for a renowned manufacture to debut colorful new pieces can be widely considered a “controversial move.” I can’t help but feel inclined to point to the numerous, considerably more pressing industry issues, that we covered at length here – things that should arguably come sooner than being afraid of a brand “losing it” just because it debuted a few colorful watches.

Sure, whether you would want to wear a bright yellow (or green, or orange, or blue) watch or not is surely down to your personal preference, but to suddenly find a brand to be “controversial” or “polarizing” for its use of colors on a sporty collection may be one unnecessary step too far in watch-snobbery. 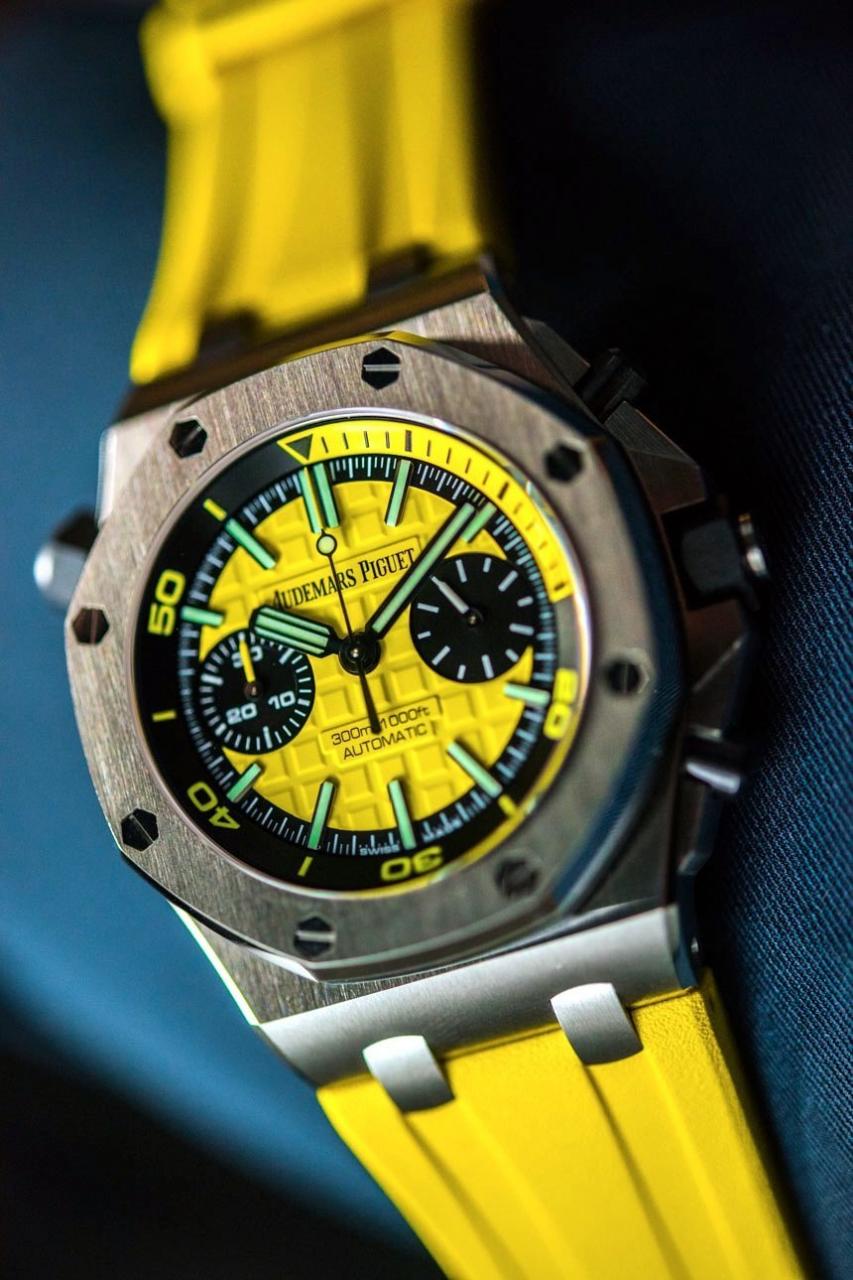 When approached with a more open mind, the new Audemars Piguet Royal Oak Offshore Diver Chronograph may just surprise you with its blend of popping bright colors and AP-standard craftsmanship – I could feel its genuinely fun vibe get to me even in snowy-foggy Geneva in the middle of January. While the deemed success or failure of color schemes may very well be down to personal taste, I can only applaud it when brands leave behind their usual – and, for the most part, not very fascinating – black-silver-white colorways and dare think out of the box a bit. At a time when such an overwhelmingly large number of high-end brands dedicate most all their attention to “heritage,” “tribute,” “anniversary,” and “vintage,” to see something as fun, unapologetic, and bold as the new ROO Diver Chronograph, was a truly refreshing experience… even if, technically, it is based on a 1972 design. 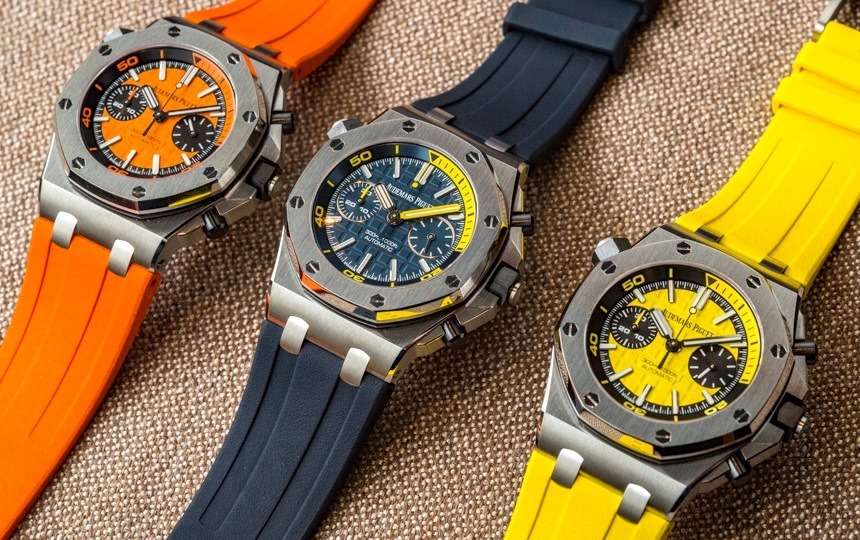 This new chronograph version brings that modern approach to the next level as, at the time of release, there actually are no truly conservative color options for the new Audemars Piguet Royal Oak Offshore Diver Chronograph: you can have it in bright yellow, vibrant orange, deep blue (with a splash of yellow), or in-your-face green (facts: that latter one is not an official color code, and it is being reserved for the Geneva boutique only – seriously). 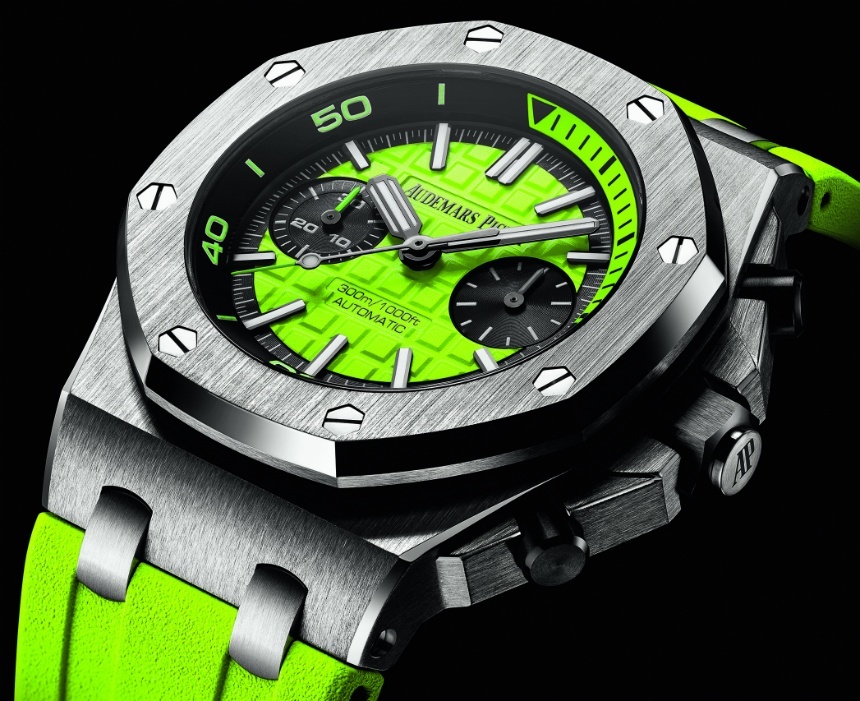 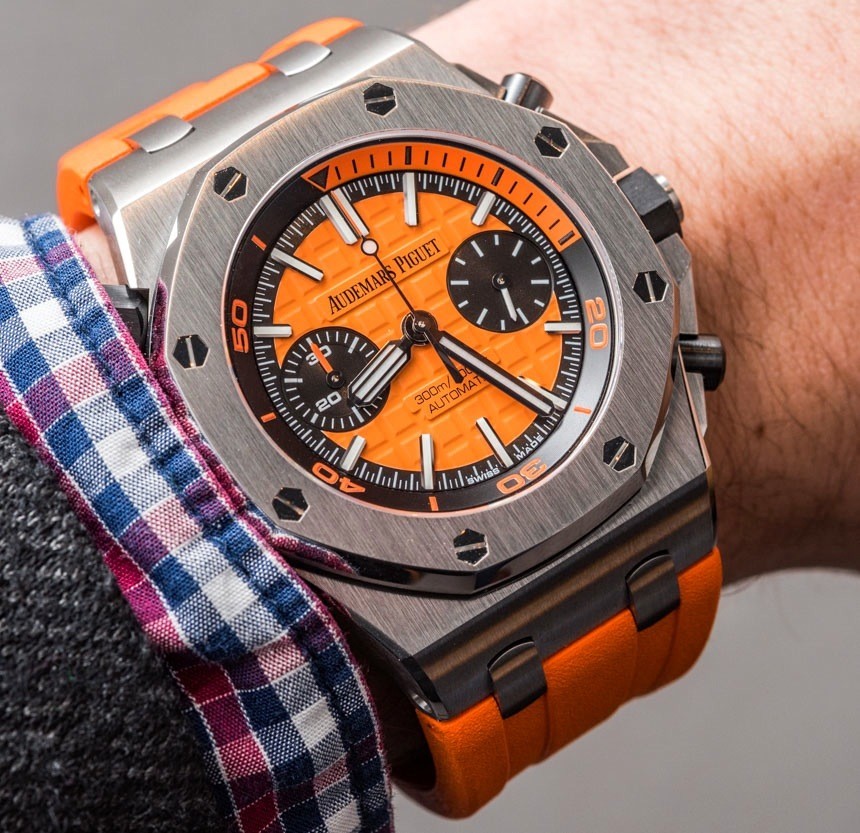 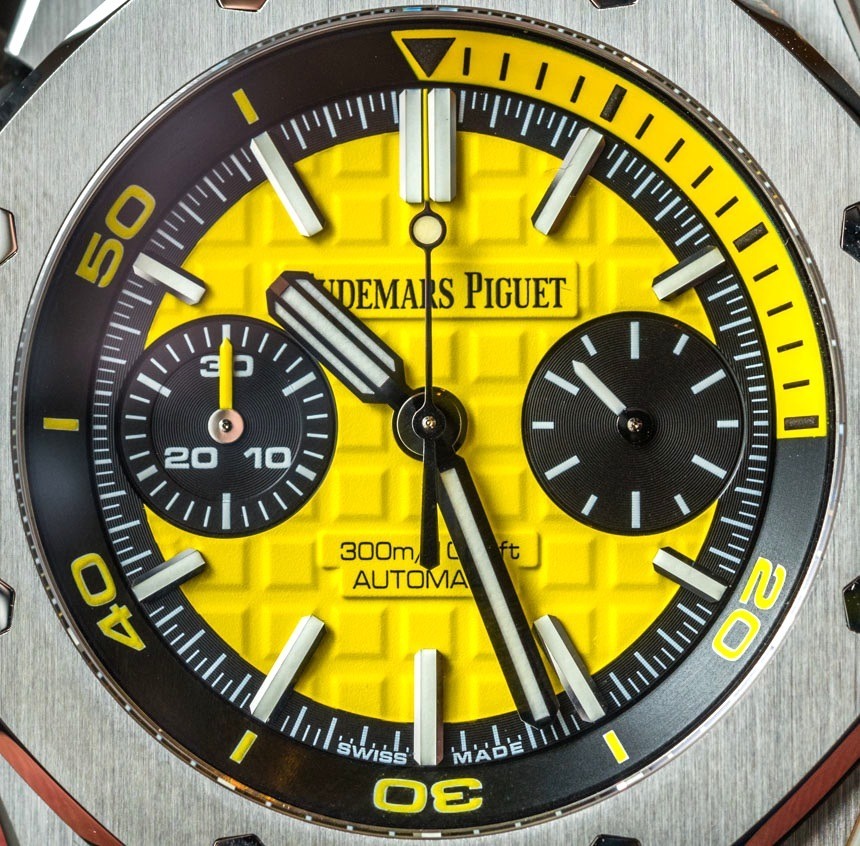 The new Diver Chronograph retains many of the original Diver’s trademark design elements. The inner rotating flange ring that can be adjusted via the ceramic crown at the 10 o’clock position is still present, and so is Audemars Piguet’s trademark “Méga Tapisserie” dial pattern with those chunky, well-defined blocks that, to this day, still work so well with the overall theme and looks of the watch. The massive hour and minute hands remain, and so do the applied indices with the faceted edges – upon a closer look, you will find numerous high-end details to keep the new Diver in line with what you would expect from AP when it comes to quality of execution. 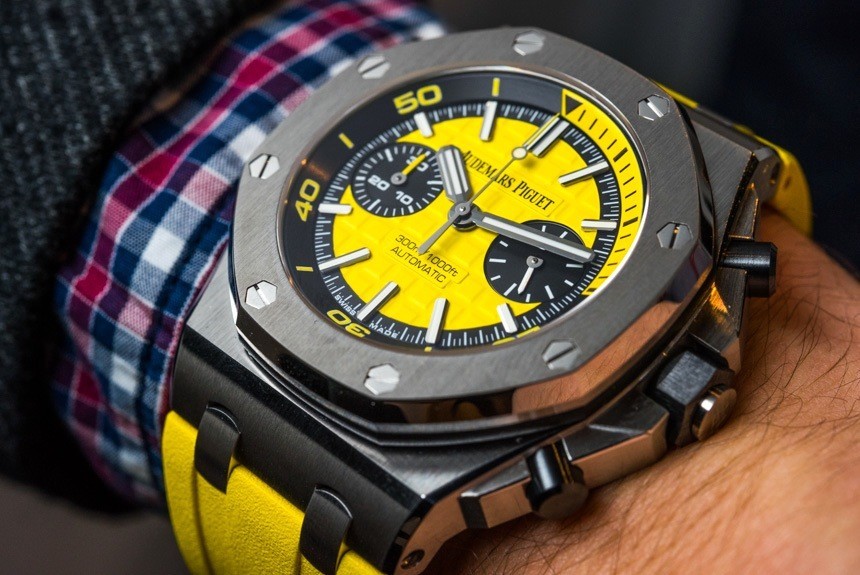 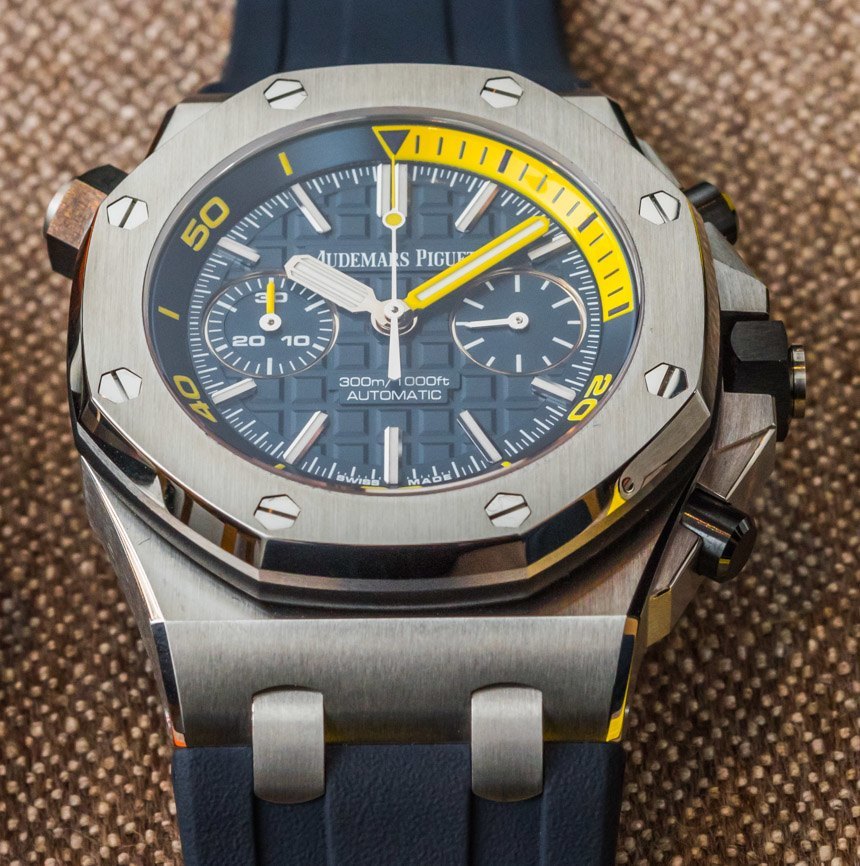 Despite the svelte profile though, the gold 15202 is a surprisingly hefty watch. This tactile illusion is due, of course to the fact that gold’s density is nearly 3 times that of stainless steel, lending the assertive wrist presence of a far larger sports watch to one that can otherwise slide easily beneath the cuff of a dress shirt. When you examine the bracelet and case when considering the weight of the golden, the slender profile but strong gold look presents a contrasted personality which works well. It’s safe, but a contemporary design icon in an old-school material.From that the dial-side, the appearance and texture of the 15202 is distinctly classic — like a classic re-issue of this first 5402 in golden. Inside though, beats another story. Here we have the Caliber 2121, now produced in house by Audemars Piguet (from the Royal Oak’s formative years, the 2121 was really produced by Jaeger LeCoultre). It’s an ultra-thin automated motion measuring 3.05mm thick, and characterized by a particular 2.75Hz (19,800 vibrations per hour), though that marginally lower-than-average alternance is not readily visible as the 15202 doesn’t feature a running moments hand. Unlike the 5402 that inspired it, the 15202 has a sapphire crystal display caseback, through which the cal. 2121’s 21-carat gold strand is visible, as it glides back and forth about the round rail conducting the circumference of the motion — one of the tricks enabling the 2121’s signature thinness.In total, the 15202 will be available in three variants — the new gold options (yellow gold onto champagne yellow, or yellowish gold on blue) join the existing stainless steel 15202 which was re-introduced back in 2012. While the stainless steel Extra-Thin Jumbo Royal Oak begins at approximately $22,000, those seeking to ‘remain gold’ can expect to part with more double that — $55,000 for its 18-carat gold variations.

The Royal Oak Offshore case is as impressive as ever, too: built like a tank, crafted from beautifully machined and polished steel in a size of 42 millimeters wide and 14.75 millimeters thick. The ROO strikes a fascinating balance, looking like the love child of weapon-grade equipment and fine jewelry. Just look at that profile shot two above: it is chunky, blocky, and yet in some weirdly cool way, justifiably over the top. 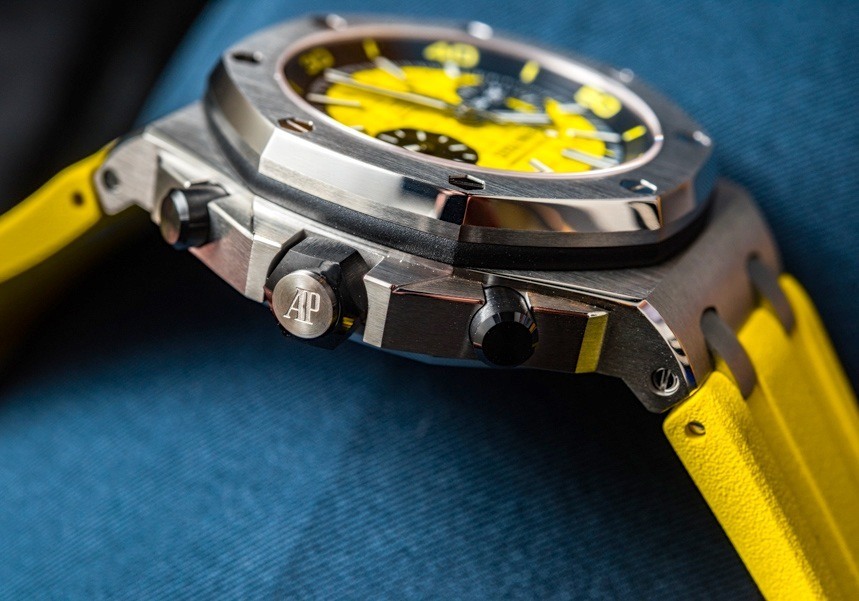 To create some much needed contrast to all this muscle-flexing, the thin, polished and beveled edge that runs along the side of the crown protector bridge, the side of the case and lugs, and also the edge of the bezel all work in tandem to give a high-end feel to a watch that otherwise could easily just come off as a block of brushed steel that tries too hard to impress. 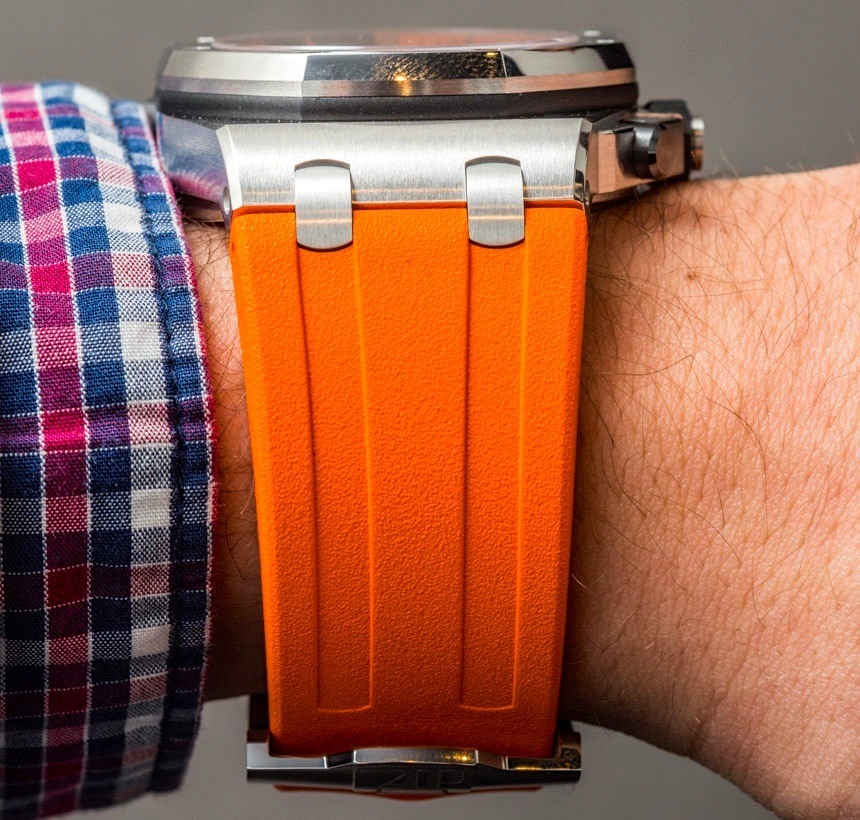 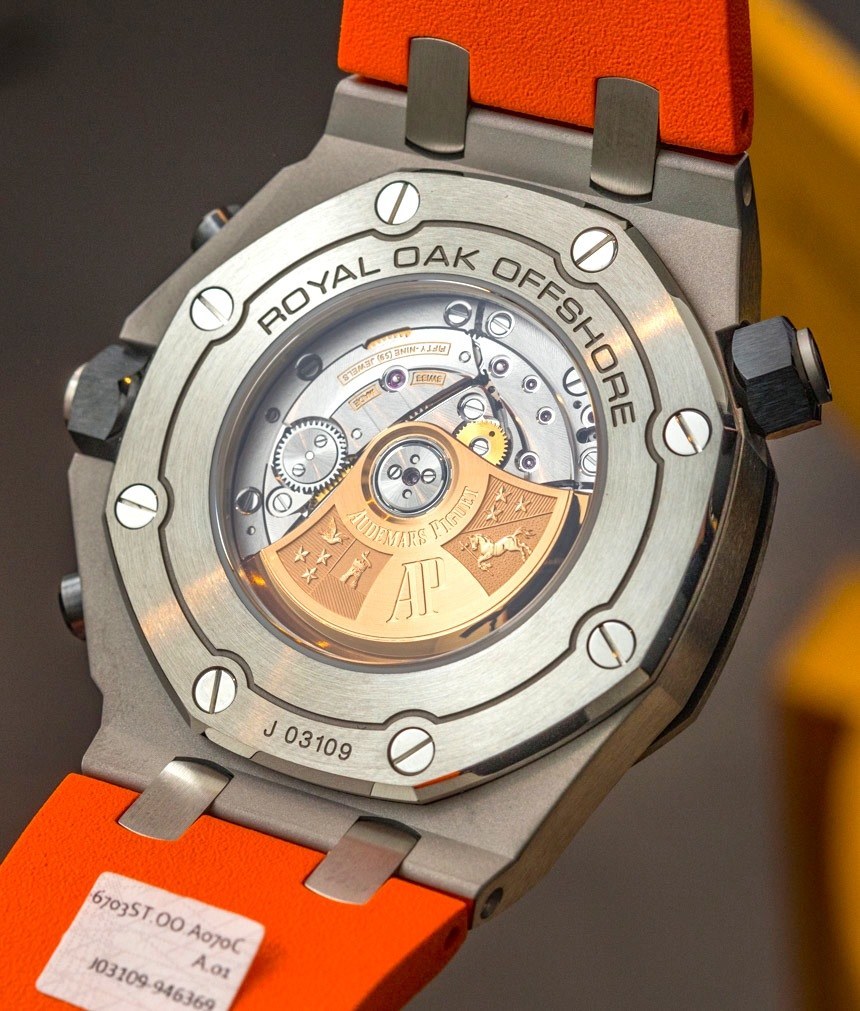 It was a relief to see Audemars Piguet not shy away from using a see-through case-back, using the 300-meter water resistance rating as an excuse to hide what’s inside. Hence, what you will discover turning the new Diver Chronograph over is the impressive-looking Audemars Piguet Homage Watches Calibre 3124/3841 – a manufacture base caliber with a Dubois-Depraz chronograph module on top. That’s right, AP has stuck with this modular construction,  while Vacheron Constantin has at last updated its Overseas (hands-on here), and Patek Philippe’s Nautilus (hands-on here) also has their in-house chronograph movement, albeit at a much higher price. 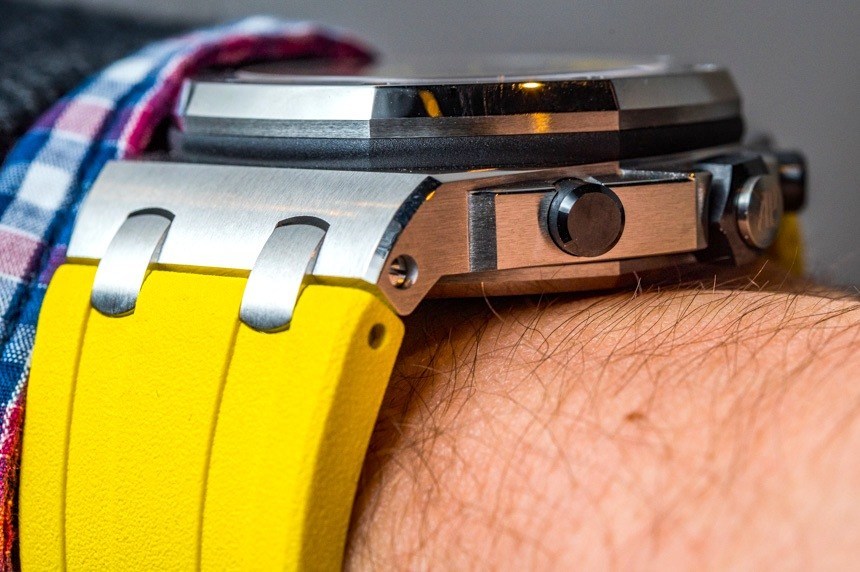 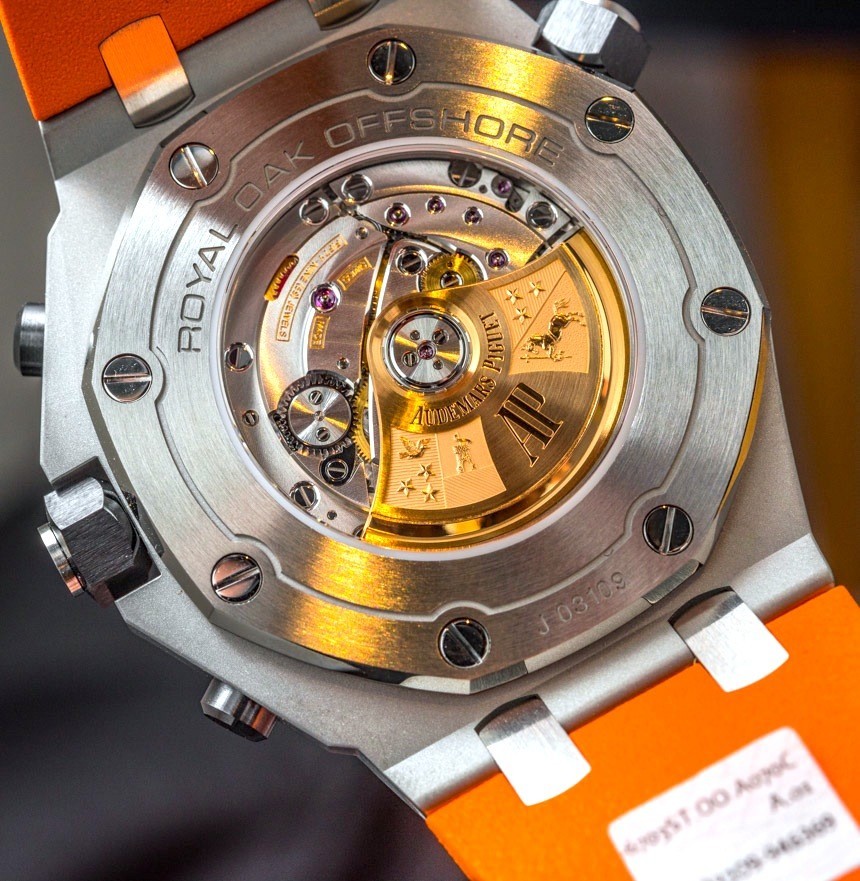 An easy way to spot and distinguish a modular chronograph movement from an integrated one is to check the pushers and crown of the case: if the chronograph pushers are not on the same level as the crown but further up, then you know there has been a module installed on top of a base movement. Just check the profile shot two above, for a “once seen, you can never unsee” experience. This little detail may or may not be an issue for you – although, arguably, the higher the price, the more expected a fully in-house movement becomes.