Oris Williams collection was luanched last year, it is a watch which is designed to reflect the speed, power, and technology of Formula 1. And this year’s Baselworld, it launched a limited edition carbon fibre watch in honor of Williams F1 driver Valtteri Bottas. 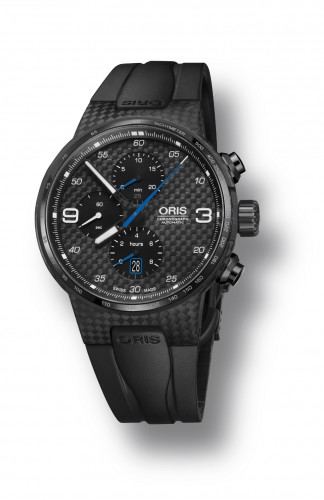 Valtteri Bottas, for those who do not follow F1, is one of the few up-and-coming drivers in the prestigious motorsport event. The 26 year-old Finnish driver started racing for the Williams team in 2013, and this will be his fourth year racing for the same team. Within this period, he had amassed eight podiums finishes and 326 points from 57 Grand Prix.

The Williams Valtteri Bottas limited Edition is a watch that was produced to celebrate the success and achievements of this promising F1 driver. It is based on the Williams Chronograph Carbon Fibre Extreme, which features a carbon fibre case that is produced using an Oris-patented manufacturing technique that was derived from F1. The case, notably, is produced from sheets of woven carbon fibre reinforced polymers that are layered manually, and then hardened twice at 130°C in special ovens. Not only does this make the watch lighter, but it is also robust and aesthetically sporty at the same time. 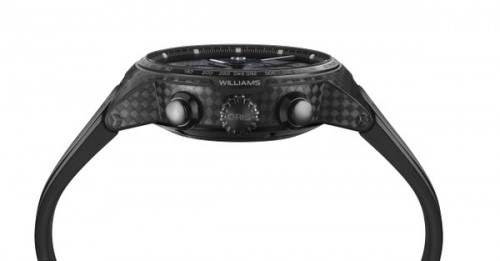 The watch is fitted with the Oris Calibre 674, which is based on the ETA 7750. The automatic timepiece features a chronograph function, as well as a date indicator at the 6 o’clock position. It boasts a power reserve of approximately 48 hours.

The 44mm watch, as mentioned, is cased in carbon fibre. In addition, the dial is also made from the same material as well. The timepiece also features components with DLC-coated titanium, such as the bezel, crown/ pushers and case back. On the topic of case backs, this version features engravings with Valtteri Bottas name and race number (77). It is topped off with a limited edition number. 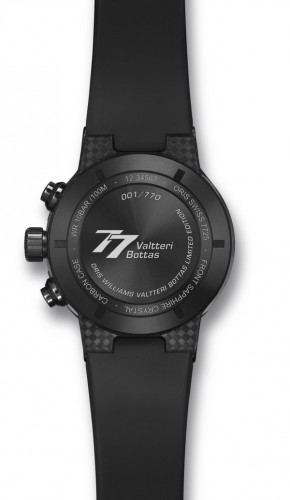 The Oris Williams Valtteri Bottas Limited Edition is limited to 770 pieces, and they are priced at CHF 4,350 each. The watch will be fitted with a streamlined rubber strap that mirrors the aerodynamic design of a Williams F1 car, and it will be fastened with a black DLC-coated titanium folding clasp.