Divine And Elegant-Omega Speedmaster White Side Of The Moon

Omega Moon Speedmaster collection has Dark Side, Grey Side and White Side watches. The White Side watch, features an abundance of white zirconium oxide ceramic on both the dial and the case.

The White Side of the Moon retains the 44.25 mm ceramic case we’ve seen within the line before. The watch wears well for its size, however, as we’ve noted on several occasions, it sits quite high on the wrist at 16 mm thick. The case itself is not the issue, rather it’s the boxed sapphire crystal extruding from both the dial and movement side. Thankfully, the watch has plenty of redeeming qualities in the form of Omega’s own Co-Axial caliber, symmetrical design, and rock-solid build quality. 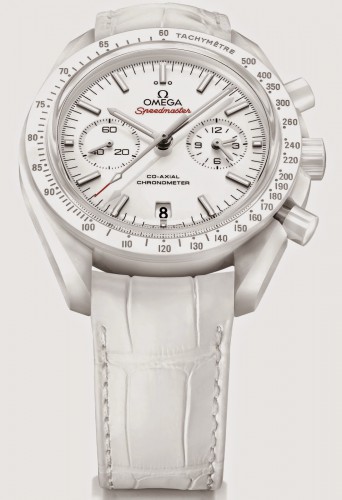 The dial of the all-white Speedmaster is itself zirconium oxide ceramic, and is even labeled as such with “ZrO2” engraved at its center. The monotone color-scheme is broken-up by the black demarcations, 18k white gold-hands and indexes, the subtle red at the tip of the chronograph seconds hand, and the “Speedmaster” signature at 12 o’clock. The bezel features a matte chromium nitride tachymeter scale, giving off what looks to be a ghosted appearance in initial images. 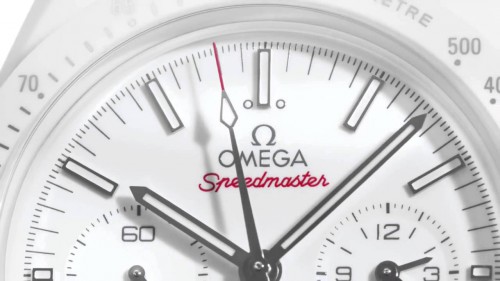 Inside the White Side of the Moon is Omega’s Co-Axial caliber 9300. The automatic chronograph movement features a column-wheel design and both looks and feels top notch. 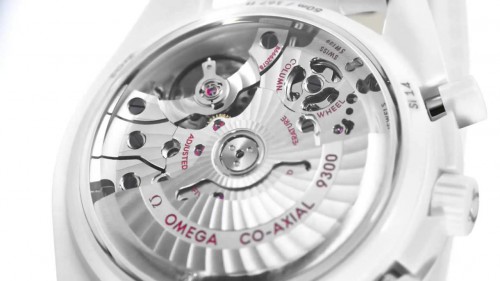 The star of the show here is the meticulous construction of the case and each of its constituent components out of white ceramic. We’ll have live shots of this watch from Basel later this week, as well as additional pricing and availability details. Until then, enjoy Omega’s images of the newest, and most peculiar, Speedmaster.