Van Cleef & Arpels has made something of a name for itself in unusual complications over the last few years, especially its so-called “poetic complications,” which typically take the form of pretty mechanically complex animated figures that act out a short tableau on the dial side of the watch. They’ve also created one of the most engaging astronomical watches: the Midnight Planétarium, for which they partnered with Christiaan van der Klaauw. But this year we saw something very unusual from them: an astronomy-themed watch that’s lit from within by a power generating system we don’t think has ever been used in watchmaking before. 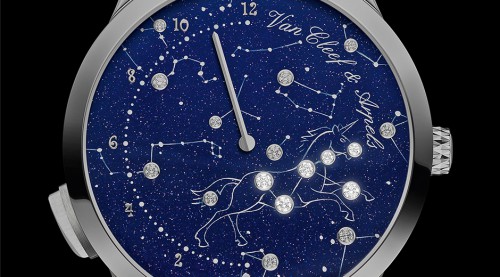 This is a pretty good looking timepiece even without the magic trick, though in comparison with some of the other high jewelry pieces and Poetic Complication pieces it seems a little on the plain side. The only clue that there is more here than meets the eye is the rather enigmatic little pusher set into the case band at 8:00 – and of course, the observant among us would also immediately note that this is a retrogade hour watch; there’s no minute hand, which given the artistic aspirations of the Midnight Nuit Lumineuse is not something you can really hold against it. 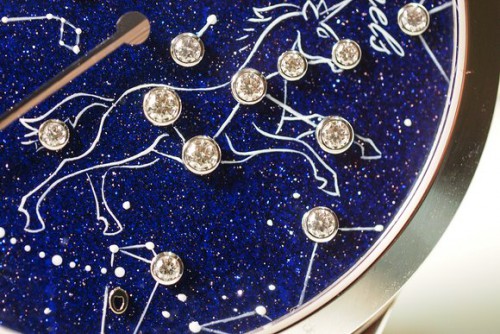 You will also notice that there is a specific constellation on the dial: Monoceros, or the Unicorn; the unicorn has been used as a design motif by Van Cleef & Arpels previously in its history and makes a reappearance now on the watch. In the sky, Monoceros is a Northern Hemisphere constellation, close to the horizon, which is somewhat difficult to see with the naked eye, although it does contain Beta Monocerotis – a gorgeous, triple-star system, which though only visible through a telescope, was described in the 18th century by the famed pioneering astronomer William Herschel as “one of the most beautiful sites in the heavens.” 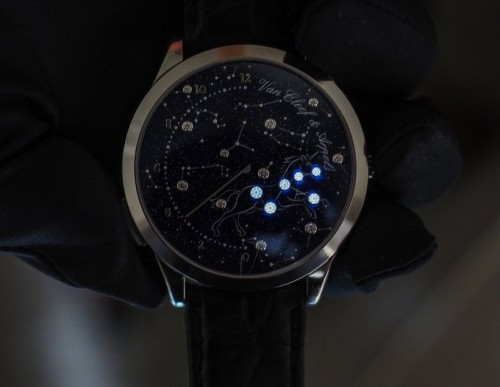 Just as with the actual constellation, a closer look at the watch rewards you with something beautiful to look at as well. Pressing the button set into the case-band causes six of the stars in the constellation to light up. And not only is there no battery behind the light show, there isn’t even a conventional generator. 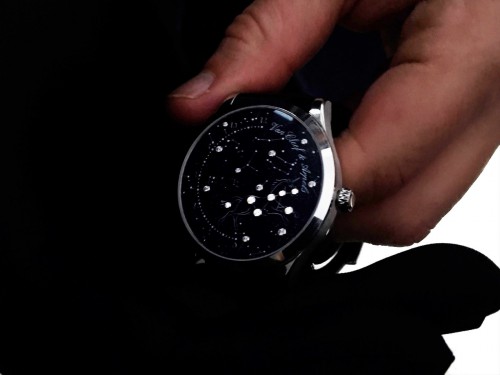 Pressing home the slide triggers a mechanism inside the watch, powered by the movement, that causes a strip of ceramic to vibrate. The key here is that certain materials exhibit a property called piezoelectricity. Piezoelectric materials will deform when you run a current through them – probably the most notable example in watchmaking is quartz. Tuning fork shaped quartz crystals are at the heart of every quartz watch: cut them to a certain shape, and pass a current with a certain voltage through them, and they’ll vibrate at a specific frequency.

This is a really clever and original way to animate a watch, and as we said, we can’t recall ever seeing anything quite like it. It’s an absolutely delightful new complication and we wonder very much what else could be done with this by Van Cleef & Arpels, who hold a patent for the mechanism. Definitely one of the most interesting complications we’ve seen in some time.