Roger Dubuis Excalibur has hallmark fluted bezel and triple lugs, provides the perfect frame in which to present three tableaus depicting the rich bounties of nature. It just limites to 28-piece.

A recurrent theme in nature as well as in literature and mythology, ivy has always carried powerful connotations of emotional attachment, as well as symbolising both faithfulness and eternity. 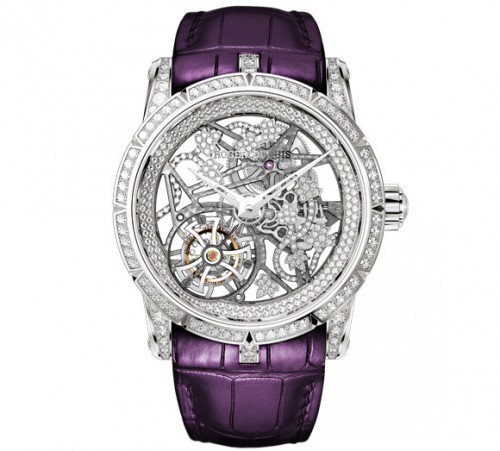 “Unlike flowers, ivy requires a structure on which to grow – whether natural in the case of trees or rocks, or else manmade lattices” explains Product Design Director Lionel Favre. “In the case of Roger Dubuis, the inherent skeleton-structured functional basis of its movements becomes the perfect supporting structure for jewellery elements in these stunning Brocéliande models.”

While the result is astonishingly lifelike and natural, it is in fact anything but simple to literally incorporate such jewellery elements into a movement. And especially so when dealing with genuine volumes and not just tiny decorative features. These creations enshrine the encounter between the worlds of watchmaking and jewellery that generally intersect at the last moment in the creative process, but which in this instance meet and mingle right from the start. 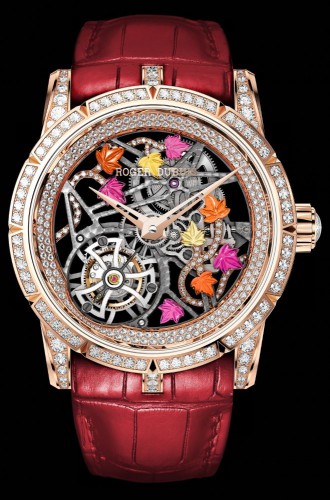 The openworking of the movement follows the Astral Skeleton star-shaped design developed by Roger Dubuis for its skeleton calibres. When the watchmaker assembles the movement, the ivy tendrils crafted by the jeweller form an integral part of the calibre. The vines are thus interlaced with the bridges forming the interior of the calibre. Creating a perfect optical illusion, the ivy must give the impression of running across the movement – yet without actually touching it, since it would otherwise inevitably scratch the delicate mechanism.

The resulting multi-layered 3D impact that has become a Roger Dubuis speciality is further enhanced by the judicious use of gemstones to accentuate the design. 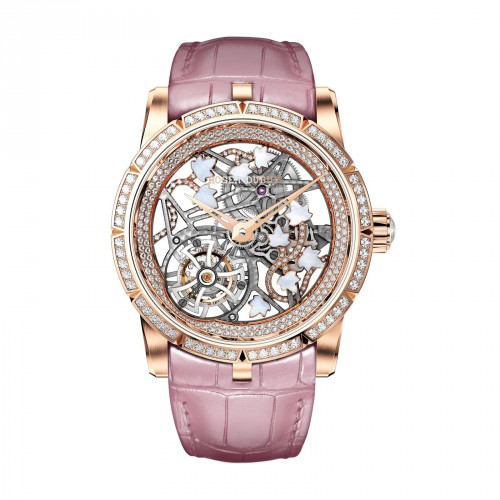 The rose-cut diamond on the crown – as well as the brilliant-cut F-G or Top Wesselton diamonds variously adorning the case, bezel, flange, clasp and ivy stems, depending the model – are specifically cut to match watchmaking criteria. For the gem-set ivy ornaments, the stones are held by prongs and delicately placed on the gold-wire ivy stems using the serti descendu technique.

To effectively interpret the spirit and essence of these exquisite models, Roger Dubuis successfully tracked down a talented artist capable of conveying the creative vision of the Maison through an innovative and daring artistic set design.

French art director and illustrator Alexandra Bruel – renowned for using plasticine modelling clay to create sculptures and vibrant pop art props and whose work is regularly featured in the international press – has used this distinctive material to recreate the unique flowers adorning Brocéliande.

The result is a set of standout visuals that vividly portray the ever distinctive nature of Roger Dubuis and are every bit as original as the models themselves.