Having accustomed its worldwide following to a quality commitment expressed through the Poinçon de Genève certification of its resolutely Haute Horlogerie production, Manufacture Roger Dubuis logically applies similarly uncompromising standards in its approach to Haute Joaillerie. Solid technical foundations, a stunning flair for design as well as superlative gemsetting are magnificently mingled and showcased in the Velvet Ribbon, embodying the very essence of precious and exclusive horology. 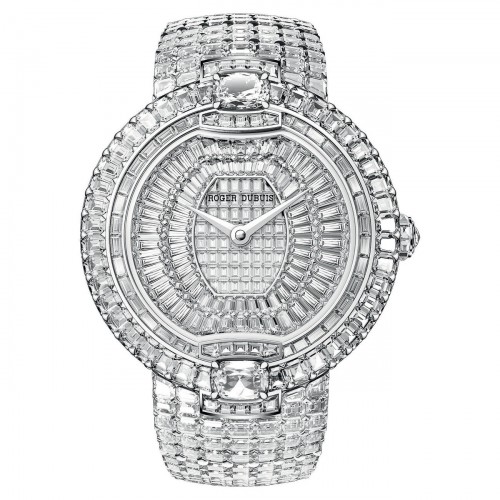 The Velvet collection is clearly intended for refined and discerning women who appreciate the intrinsic value of a fine mechanical movement, but whose innate elegance and sophistication also draws them towards dressy, glamorous models with a sparkle to match their own.

These natural-born divas appreciate the charisma exuded by models bearing a wealth of signature features such as striking split- level dials accentuating the sense of depth; voluptuous trompe l’oeil cases appealing to those who prefer not to choose between a tonneau (barrel) or a circle; large tapering Roman numerals converging towards the centre; as well as exquisitely ornamental lugs including that famous central one playing a distinctive decorative role as a precious bracelet ‘link’. 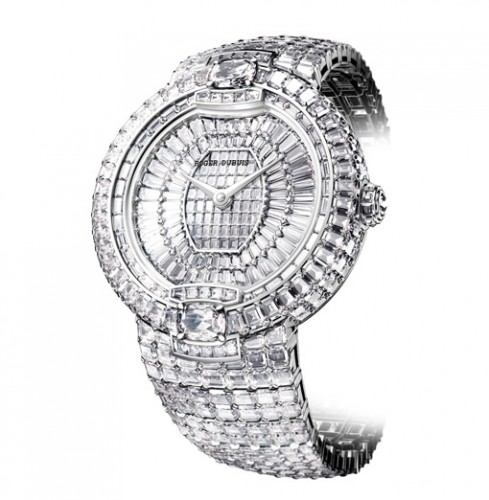 With the Velvet Ribbon, Manufacture Roger Dubuis takes things to the next level in an extraordinary creation embodying an impressive range of skills.

No less than 631 diamonds totalling around 53 carats adorn this breathtaking Haute Joaillerie model. The ideally sized 38.5 mm platinum case of the Velvet Ribbon, redesigned to adapt to opulent gemsetting, is fully paved with emerald- and baguette-cut diamonds.

The inner bezel ring and luminous dial are also fully paved with baguette-cut diamonds creating an entrancing effect further enhanced by the fact that this pristine purity remains untroubled by the usual hour- markers. It thereby offers a prime example of how less can be so much more – the famous design principle also typified by the decision to do away with the customary lateral lugs and leave only the inimitable central lug highlighted by two perfectly paired and truly exceptional 1-carat F/IF-VVS gems. 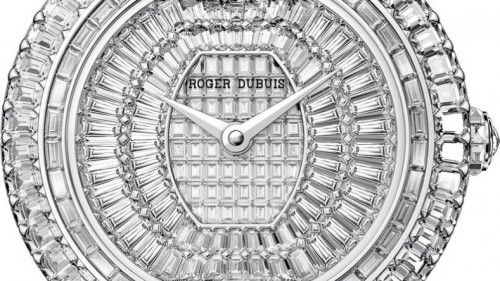 Sourcing these centre stones exemplifies the outstanding savoir-faire in the field of gemmology cultivated by Manufacture Roger Dubuisaswellasitsdeterminationtoachieve Poinçon de Genève-worthy perfection in each field of endeavour and in every detail. This will to excel is also vividly illustrated by the decision to set even the case-back with brilliant-cut diamonds, as well as to secure the seamlessly integrated bracelet with an integrated jewellery-type clasp featuring a fold-over catch.

Admirably complementing this paragon of watchmaking and jewellery excellence, the bracelet is entirely paved with emerald-cut diamonds, ensuring a smoothly understated aesthetic flow.Its mesh pattern is meticulously hand-crafted and assembled from welded gold wires to follow the curve of the wrist while ensuring it remains as supple and flowing as possible. 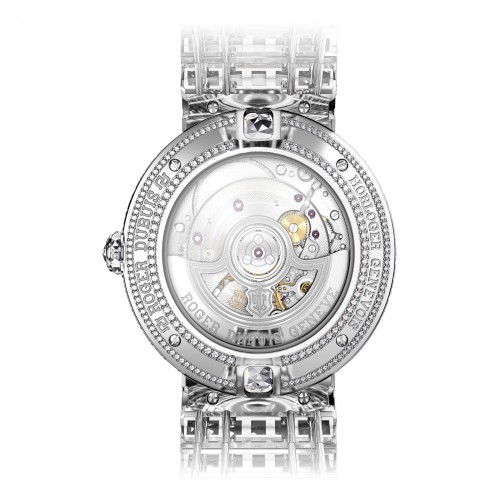 In addition to the clever play on different cuts, a variety of techniques contribute to igniting the fire of the diamonds and reinforcing the hypnotic aura instilled by the play on contrasts and the nested geometrical shapes.

This is particularly striking on the dial with its gradually widening tonneau motif and the receding perspective or sunburst pattern characteristic of Roger Dubuis designs.