It’s classic, elegant, and beautifully executed with a mix of polished and lightly brushed elements. The wide-set lugs give it a modern stance, but curve downward enough to keep its largish 48mm lug-to-lug length feeling compact. The contrast between the mirror finish of the bezel and lug tops and the lightly brushed case sides adds some visual interest, and the transition between the two is extremely sharp. 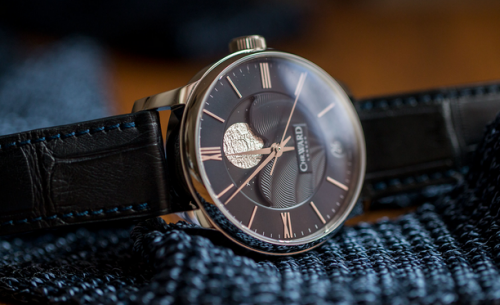 Moving to the crown, the C9 Moonphase offers a 7×3.5mm signed cylinder with a slightly stiff winding action, preventing accidental crown movement. On the back side, a polished caseback surrounds a display window for the attractive JJ04 heart. The casebook itself is remarkably clean, with only two lines of text interrupting the mirrored surface- a serial number for the movement, and a “Swiss Made” label.

The dial is really where the C9 Moonphase comes into its own. Like the case, it draws several elements from other parts of the C9 line, namely the handset and markers from the C9 5-Day Automatic, but blends them together with bespoke parts to create something that has to be seen in the flesh to be truly appreciated. The deep midnight blue of the main dial appears almost matte under some lights, and it’s only under special circumstances that the restrained sunburst pattern shows through. When it does, however, it adds an extra layer of dynamism to a design that is already bold but extremely tasteful.

At the heart of the C9 Moonphase is the 26 jewel Calibre JJ04, C Ward’s fourth in-house modified movement and their first ever moon phase complication. Built on a ETA 2836-2 base, the JJ04 adds a proprietary moonphase module designed by C Ward’s in-house movement wizard Johannes Jahnke. Jahnke’s module, run by two separate gear systems, allows for continuous movement of the moonphase indicator as opposed to the usual once-a-day jump. This, according to C Ward, allows the moon to be accurate to an impressive one day every 128 years.

The C9 Moonphase is available either on leather, alligator, or a stainless bracelet. While all 3 are solid choices, it’s my opinion that this watch was made for an alligator strap. Luckily our tester came on a nearly black midnight example that plays off the dial well. The quality of the strap is top notch, with clean even stitching and a deep pattern, but the Bader deployant it’s mounted to nearly steals the show. The mixture of brushed and polished elements is superb, the  CW logo is razor sharp, and the clasp itself is a joy to operate. If alligator is not your style, however, the C9 Moonphase would pair well with a Milanese bracelet or even a light tan leather strap to contrast the dial. 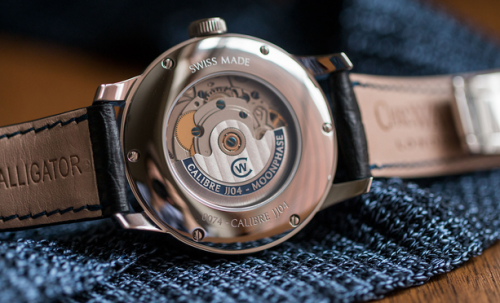 Its 40mm size strikes a great middle ground on the wrist, large enough to feel modern, but small enough to be wearable even on my 6.75” wrist. In terms of versatility, though, the C9 Moonphase is definitely an upscale piece. It’s a watch that made me want to dress better, if that makes any sense, and one that definitely feels at home in a suit and tie environment. Business casual attire isn’t out of the question here, but it wouldn’t necessarily be the right call for your next t-shirt and jeans occasion.