Additionally, the 913 includes a glucydur equilibrium wheel with golden micrometric regulating screws, making it flexible and also more shock-resistant compared to its predecessor. There is also a better winding system which employs a ball-bearing mounted rotor. The sapphire case back shows the rotor, which is reddish gold using a snailed bevel, glistening chamfers and directly and circular Côtes de Genève patterns. The Caliber 913QL is fitted with a moon stage module, a wheel with 59 cogs covering two full 29.5-day lunar cycles. It has a 40-hour power reserve.At 29.2mm, the Blancpain Villeret Date Moonphase is a very small watch considering there is a moon phase plus a date and a seconds hand, a rare edge in a little ladies’ automatic. It is proof of Blancpain’s devotion to producing size-appropriate high-grade calibers dedicated to ladies’ watches in its own elite collections. The date is elegantly spaced out just inside the hour trail, signaled by a red-tipped pointer. The bezel is set with 48 diamonds and you will find eight diamond indicators as well as four applied Roman numerals from the signature Villeret font. Even as purveyors of possibly among the world’s first truly purpose-built dip sequences, there is no denying it’s been a long time because Blancpain has even been remotely close to the tool watch realm it once initiated. That being said, it is still neat to see the brand revisit those days with a marked level of panache in the recently announced Tribute to Fifty Fathoms Mil-Spec — a watch which may cost $14,000, but it’s still every bit the capable instrument once depended upon by combat divers in the late fifties.

The redesigned IWC Da Vinci collection introduced earlier this year leaned towards big ticket complications and entry-level models, but not much in-between, except for the Da Vinci Chronograph “Laureus Sport for Good Foundation”. Steel and equipped with a proprietary movement, the Da Vinci Laureus Chronograph is the sort of reasonably accessible (with a bit of saving) wristwatch that IWC does well.

The Da Vinci Laureus the latest in an annual series of limited editions conceived to raise funds for the eponymous charity that brings sport to disadvantaged youth. This is the 11th in the series and more expensive than the average Laureus edition because of the proprietary calibre 89361 inside. 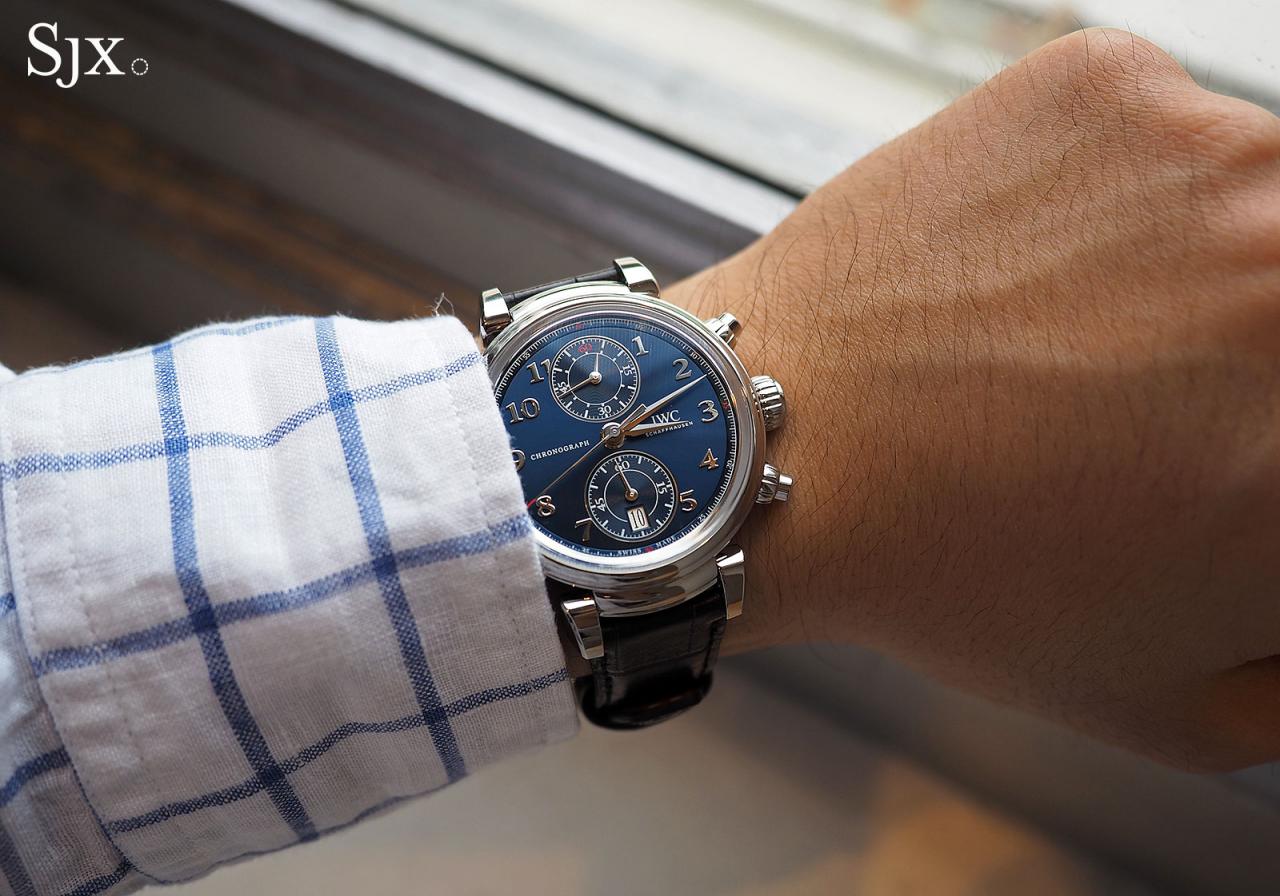 At 42mm in diameter and 14.5mm high, the Da Vinci Laureus is a largish watch, on the verge of being too big but not quite. It’s helped by the articulated lugs, which allow it to feel smaller on the wrist, though there is no escaping the height of the case.

One reason for the height is the domed sapphire crystal, a touch that’s meant to invoke vintage watches. The onion-shaped crown is probably meant to do the same, and it suits the overall design. Both chronograph pushers also have onion-shaped rings at their base, presumably to match the shape of the crown. But the buttons are not screw-down pushers, making the rings perhaps unnecessary aesthetic additions. 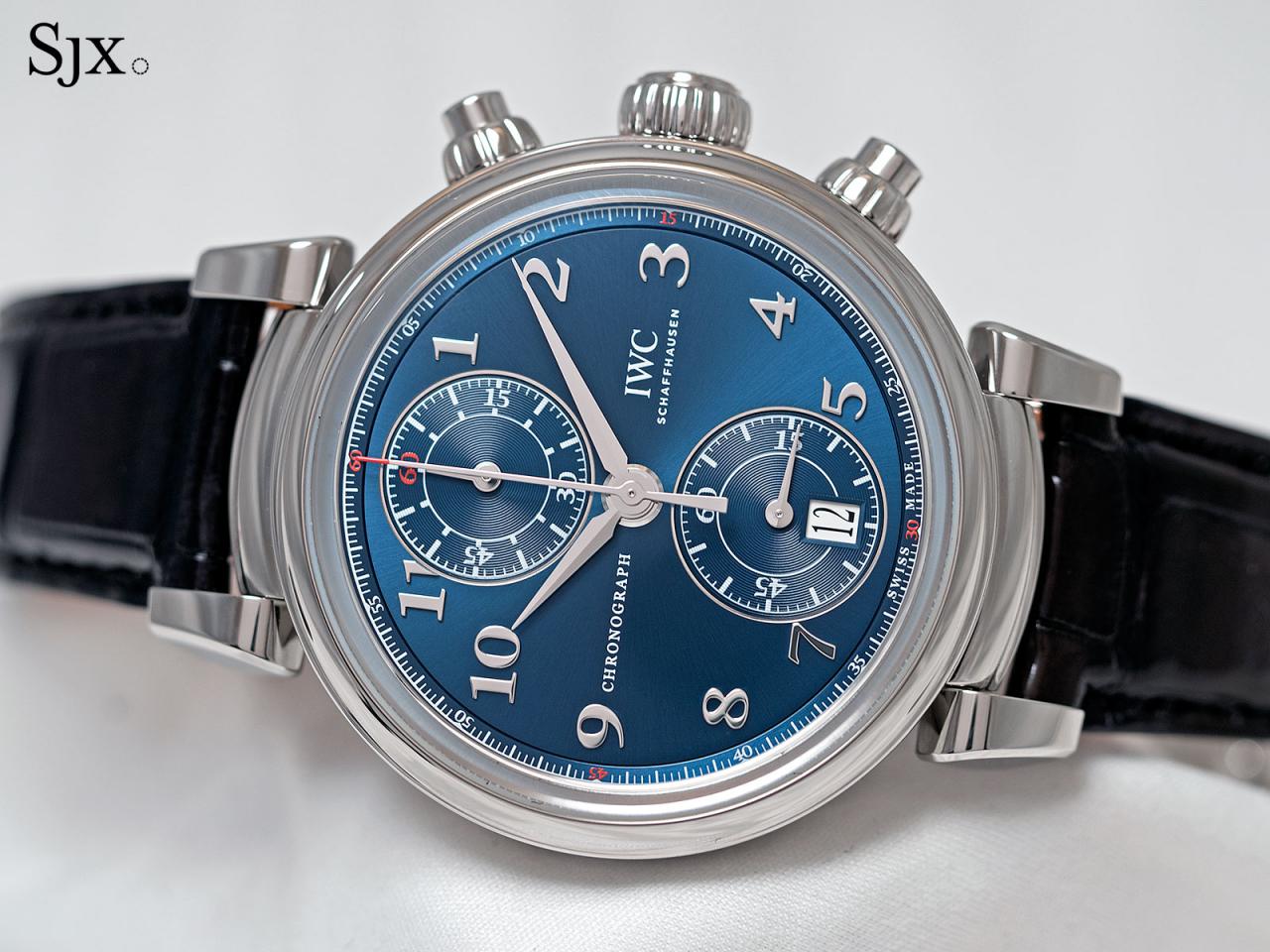 The case is entirely polished, front, back and even the lugs, which is less interesting than having alternating brushed and mirror finished surfaces. The rationale for this finish is likely the design inspiration for today’s Da Vinci: its namesake of 1985 that was similarly shaped and also entirely polished (save for uncommon examples in steel that were entirely brushed).

While every year’s Laureus edition is different, all share the same dark blue dial. Varying from a dark to medium blue depending on the light, the dial has a metallic finish that’s easy to like. 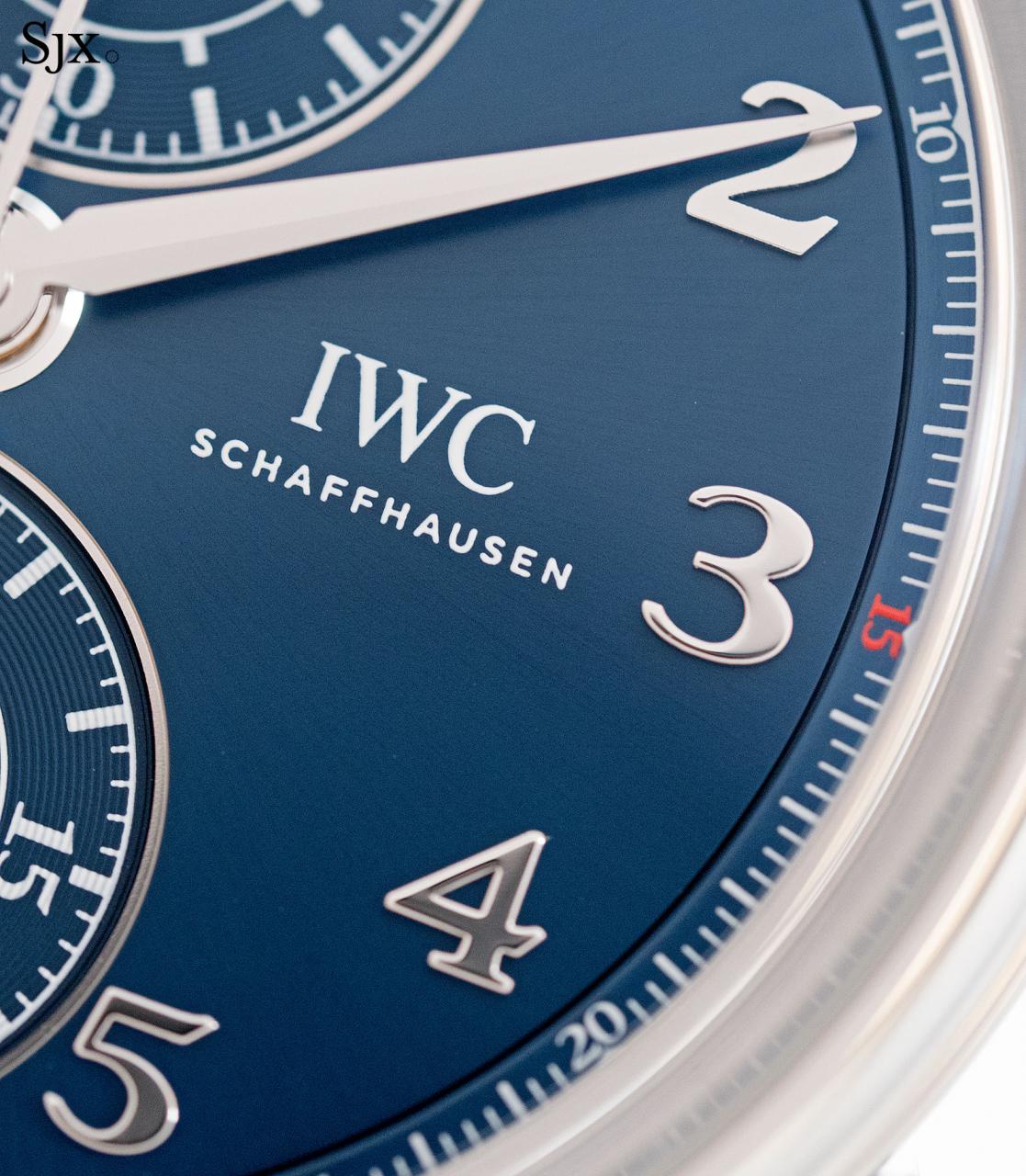 Finished with a radial brushing, it has applied numerals, white printing and red accents. Up close, several details stand out. The chapter ring carrying the minute track has a circular grained finish, serving to frame the central portion of the dial. Both chronograph registers have a stamped concentric pattern (or azurage), which is standard for chronograph watches but give the dial texture. And both chronograph sub-dials are also ringed by a metallic border, an element that echoes the hands and numerals. 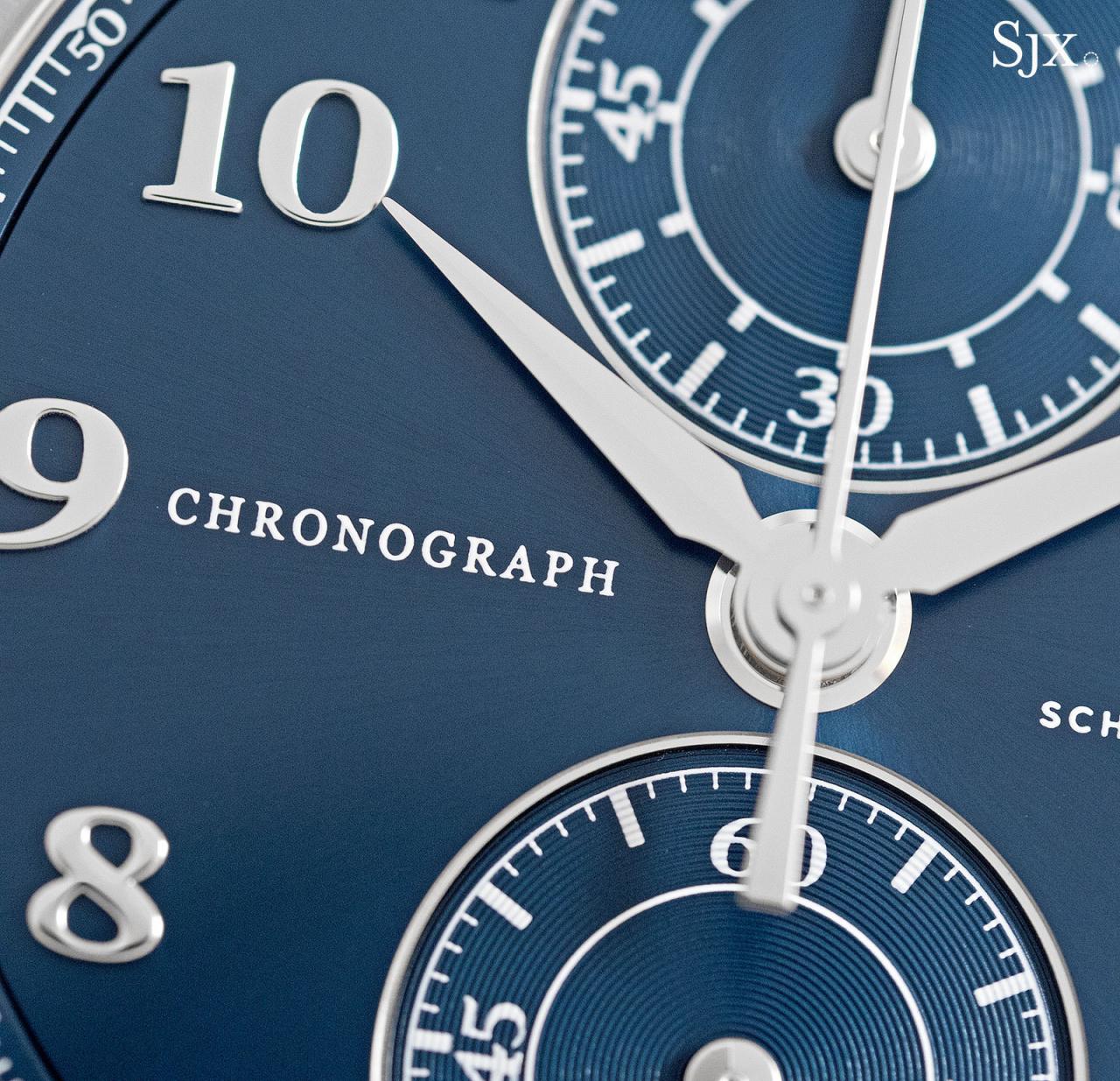 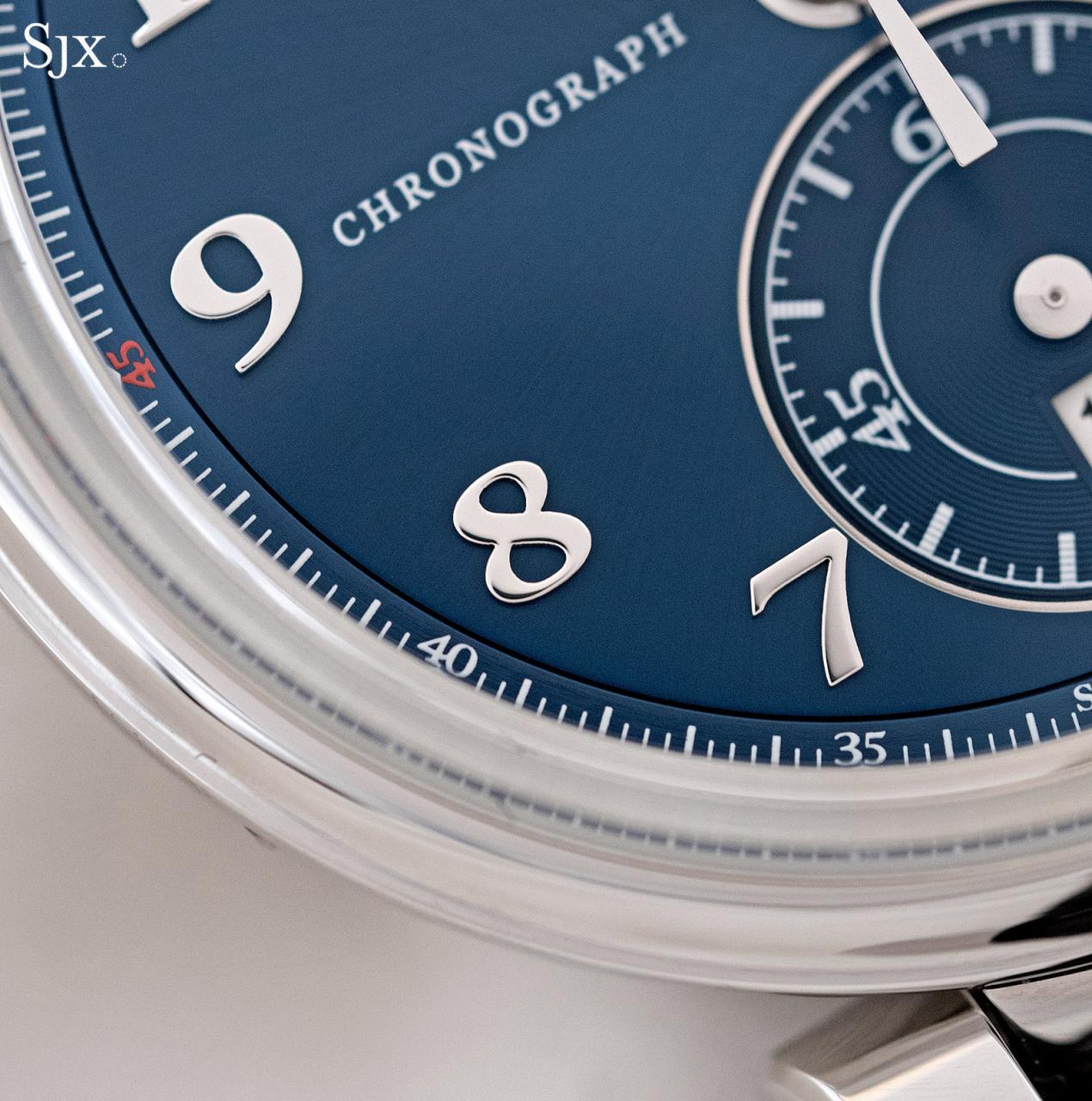 Positioned at the quarters of the dial, the red accents don’t appear to serve any functional purpose, which can be annoying for a nitpicker, but they make for a pleasing colour palette. 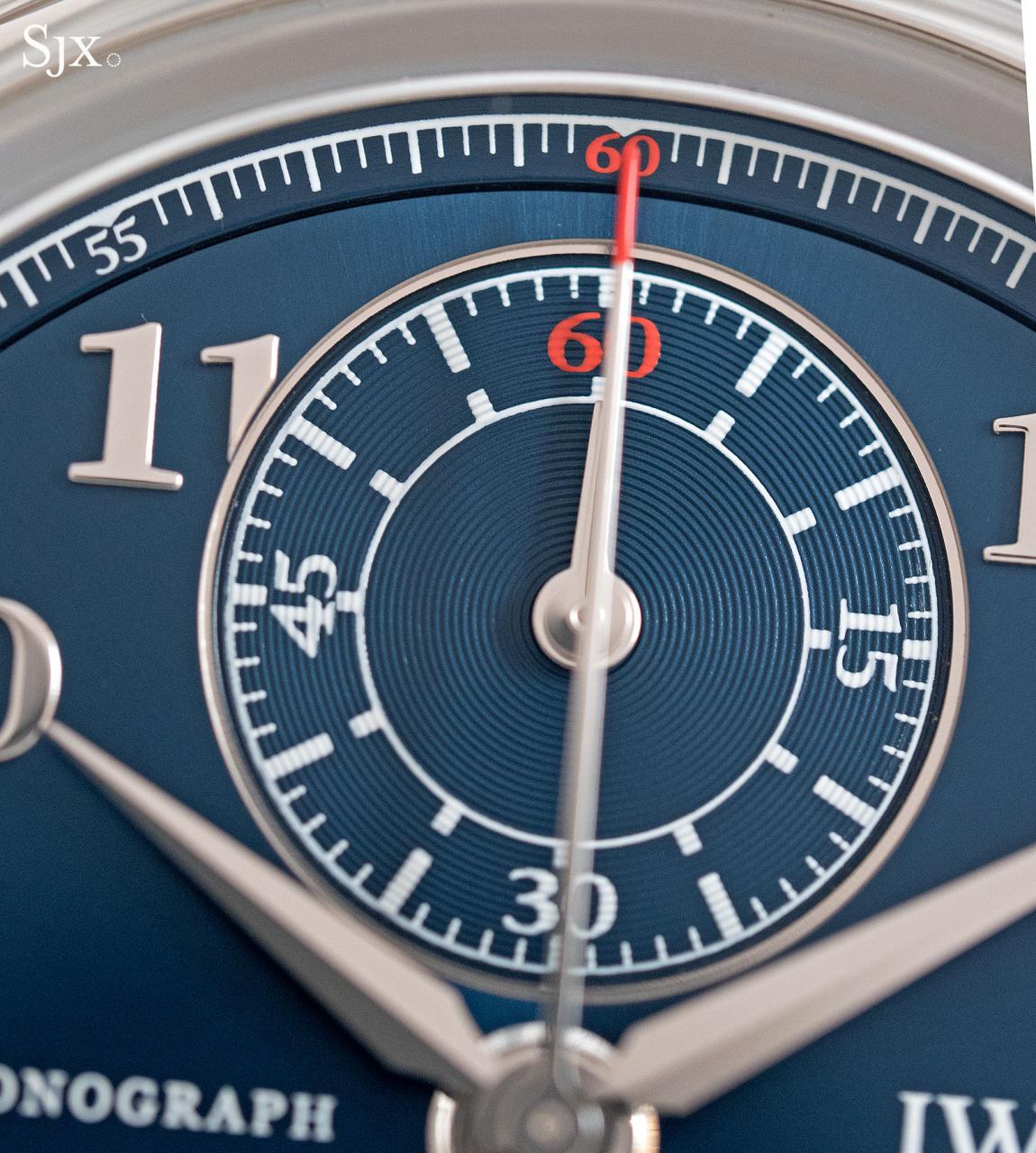 Notably, the numerals on the dial are all of a serif font specific to the Da Vinci, right down to the date disc. It evolved from the custom font created specially for the previous generation Da Vinci, which had significant attention put into its conception but nonetheless ended up a chunky, tonneau-shaped watch that did not sell well. Fortunately the new Da Vinci sticks to a tried and tested shape, while preserving the unusual font that’s a mix of classical and contemporary. 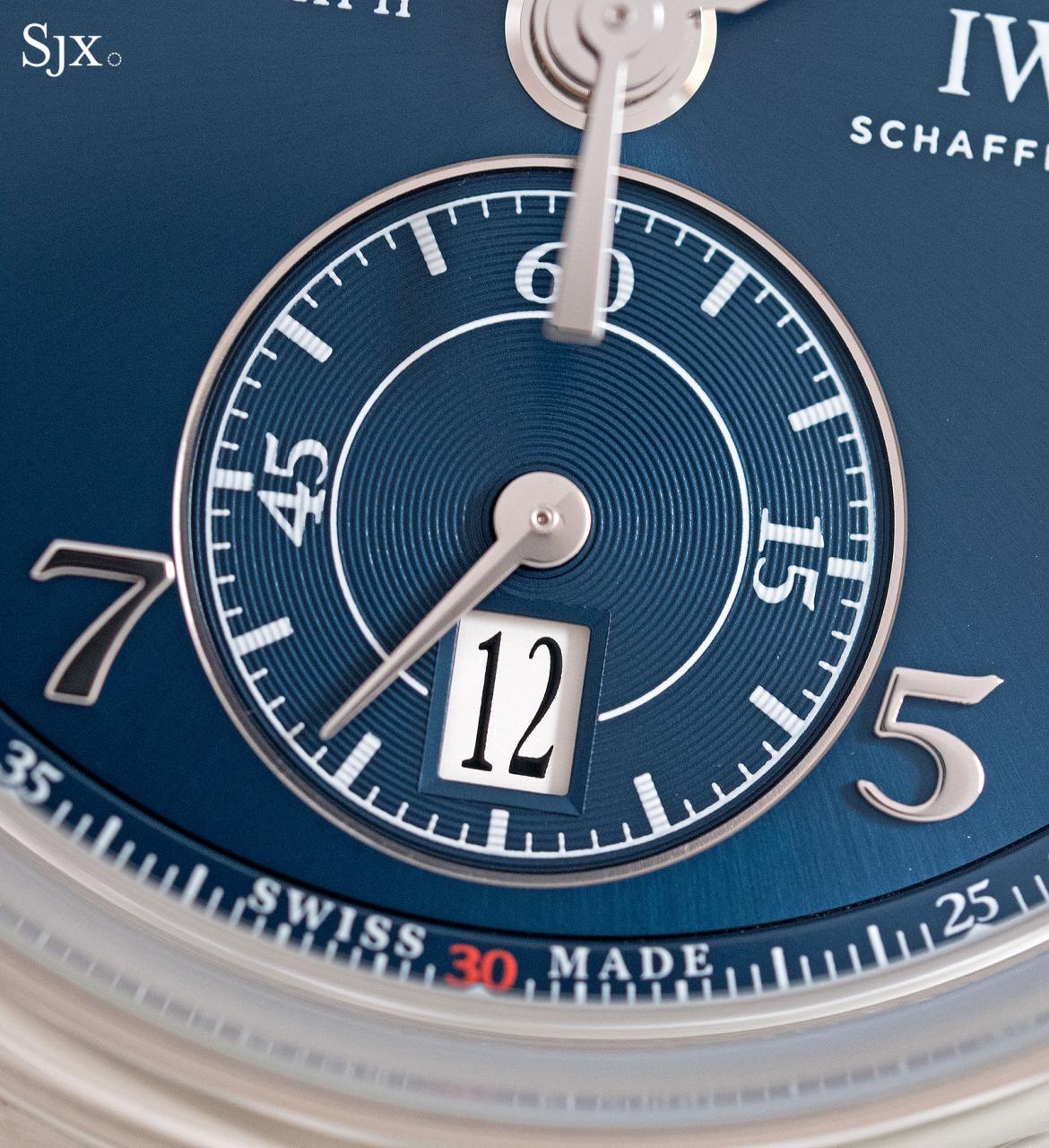 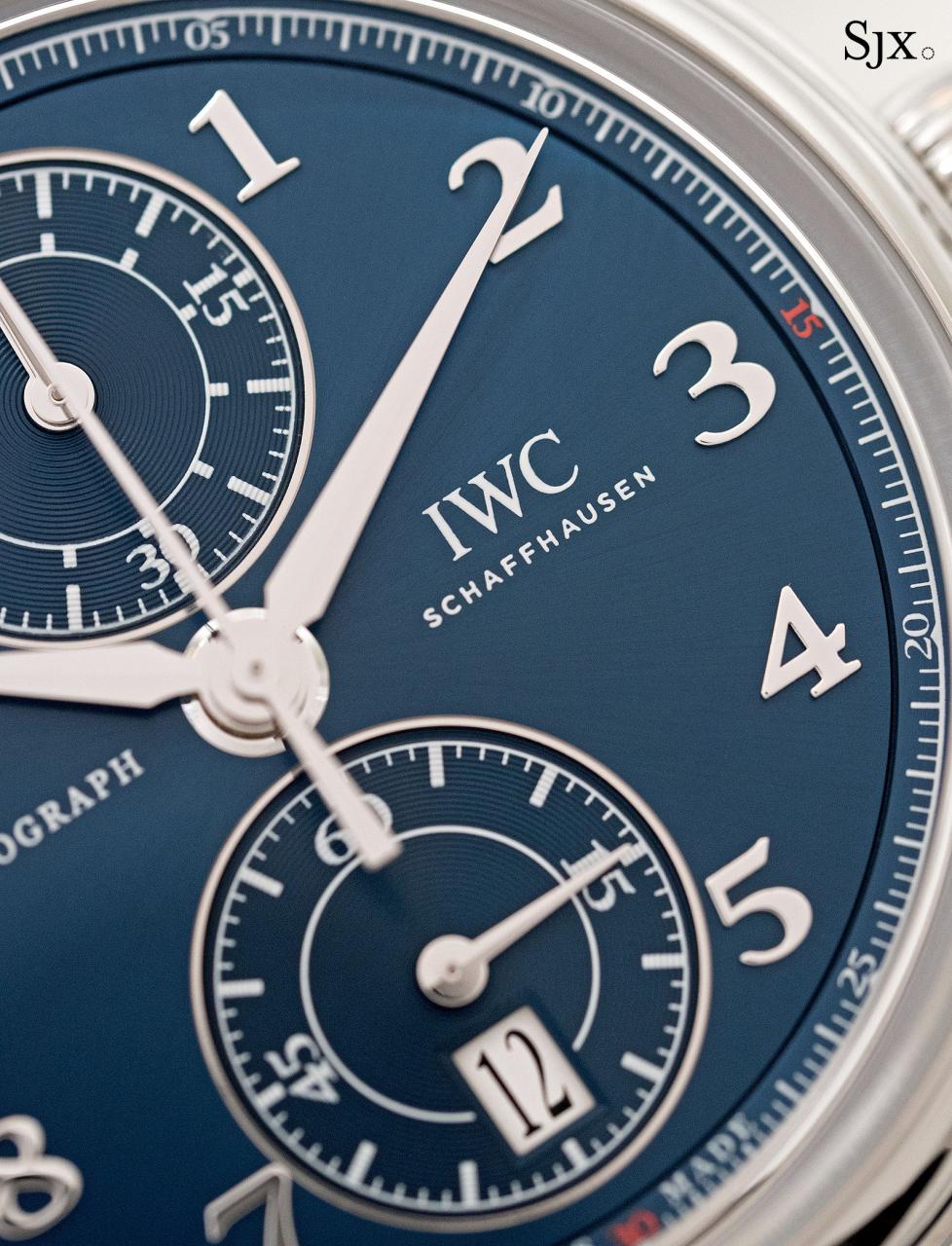 Being white, the date disc is jarring against the blue dial with a somewhat odd position – a consequence of the movement size relative to the case – but at least preserves the symmetry of the dial.

In the tradition of the Laureus watches, the solid back is decorated with an etched reproduction of a child’s drawing. Every year the Laureus foundation – which has both IWC and Mercedes-Benz as sponsors – runs a contest to select a drawing for the following year’s limited edition wristwatch. Last year’s content was won by Hou Ye, a 12-year old from Shanghai who’s a Paralympian at the Special Olympics East Asia. Ye’s winning entry is a self portrait showing him on skis. 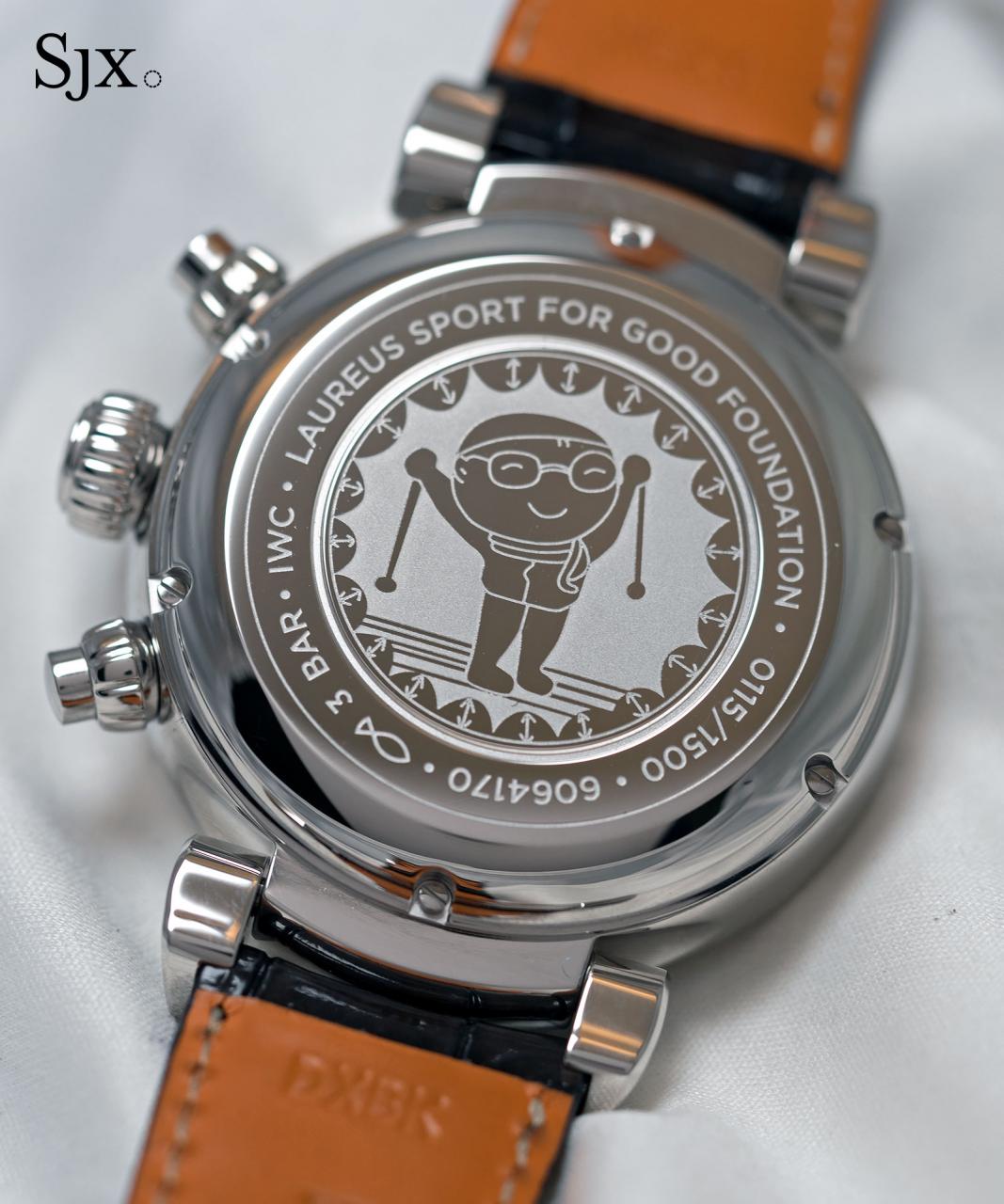 That includes all the bells and whistles expected in a mid- to high-end chronograph movement, namely a vertical clutch, column wheel, and also a useful 68-hour power reserve. Additionally, it has a flyback function, as well as the hour and minute counters being co-axial on the register at 12 o’clock, explaining the relatively clean dial. Also worth mentioning are the free-sprung balance as well as IWC’s own Pellaton winding mechanism.

The movement is the primary reason this costs what it does. In contrast, IWC’s entry-level chronograph movement, which is based on the economical Valjoux 7750, is found in the new Ingenieur and that costs a third less than the Da Vinci.

That being said, it’s probable that IWC will introduce a Da Vinci chronograph in the regular collection in the near future (think steel case paired with a silver or grey dial), which will cost less than the Laureus limited edition.

The Da Vinci Chronograph “Laureus Sport for Good Foundation” (ref. IW393402) carries a price tag of US$12,700 or S$19,100. It is already available at IWC boutiques and will reach authorised retailers soon.