Inspired by the regulators created by John and Roger Arnold over two hundred years ago, and by antique British skeleton clocks, the Arnold & Son Time Pyramid offers a highly cohesive and seductive blend of watchmaking feats that includes regulator, skeleton, vertical linear movement, pyramid-placement of components and multi-dimensional depth. 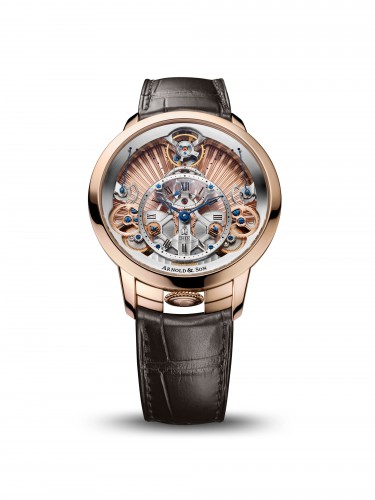 The skeletonised calibre A&S1615 follows the original regulators from the brand with its component positioning and detailed 3D visual appeal. Movement parts and watch indications are built on three levels, with the subsidiary seconds dial on the bottom, the hour indications on a sapphire crystal dial in the middle level, and a silver top ring for the minutes indication. While the movement is extremely thin – at just 4.4 mm – the multiple levels bring amazing depth and detail to the watch.

To further enhance the balance and symmetry of the Time Pyramid, the crown (with Arnold & Son’s engraved logo) is artfully positioned at six o’clock. The gear train runs vertically in a linear format connecting the two barrels at six o’clock to the balance wheel at twelve o’clock, and endowing the movement with its pyramid structure. The bridges are designed so that all of the wheels, the two mainspring barrels, the escapement and balance wheel are all magnificently visible from the dial side. 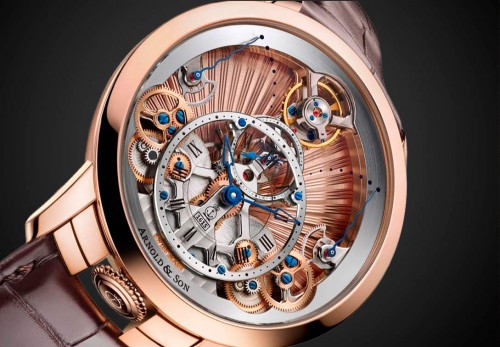 Additionally, the movement is fitted with two power reserve indicators – one each on either side of the linear gear train – to display the energy level for each barrel separately. The power reserve hands indicate the reserve level via graduated dots in an arc format, and demonstrate how one barrel transfers energy to the second one when needed. Essentially, as the first barrel winds the second one, the power reserve indicator of the first barrel goes down, while the second one goes up – making for an accurate and intriguing readout. The two mainspring barrels supply the hand-wound calibre with an amazing 90 hours of power reserve, and provide a more constant force to the wheel train. 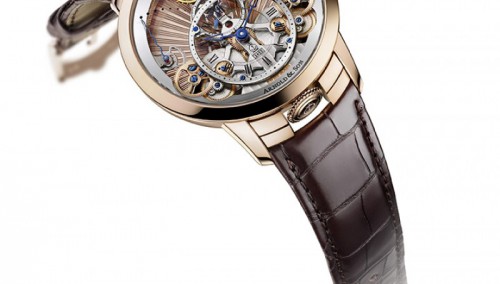 As with every esteemed Arnold & Son watch, the movement of the Time Pyramid is magnificently hand decorated with hand-chamfered brides and high-polished edges, Côtes de Genève, circular satin-finished wheels and blued screws, all yielding a striking masterpiece of decorative craftsmanship and brilliant execution. Each Time Pyramid wristwatch measures 44.6 mm in diameter in its classically elegant 18- carat red gold case with a case back beautifully decorated with a guilloché pattern on both sides. Viewed from the side, the housing is stepped and tapers from top to bottom, the widest section accommodating the extra-large glass with the lower part narrowing to fit snugly on the wrist. Each is finished with an exquisite hand-stitched alligator strap.