IWC presented several watches for its famous Pilot Watch collections at this year’s SIHH, and among the many new timepieces the brand is launching for 2016 is yet another ticking tribute to the storied poet/author/aviator Antoine de Saint-Exupéry: the IWC Big Pilot’s Watch Annual Calendar Edition “Le Petit Prince.” 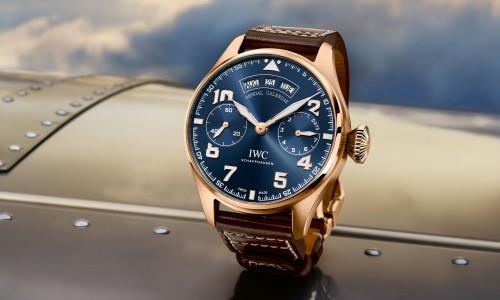 Like its predecessors, which have included a chronograph and a perpetual calendar, the new watch is a limited to just 250 pieces worldwide) and features a striking blue dial as well as visual references to the title character in Saint-Exupéry’s most famous work, Le Petit Prince, or The Little Prince. The Big Pilot’s Watch Annual Calendar Edition “Le Petit Prince” (Ref. IW50271), in an 18k rose gold case measuring 46 mm in diameter and 15.5 mm thick, is the first IWC Pilot’s Watch equipped with an annual calendar complication — which requires one correction per year, to accommodate for the month of February.

The watch’s dial has a sunburst-pattern finish and features three semicircular windows beneath the 12 o’clock position for the month, date, and day-of-the-week indications. The running seconds are on the subdial and 9 o’clock, while the display for the watch’s impressive seven-day power reserve is on the subdial at 3 o’clock. The hour and minute hands, along with the applied hour numerals and indices, are made of the same rose-gold as the case, which is satin-finished with a polished bezel. The hands and hour indicators are coated with white Super-LumiNova for visibility in low light conditions. Above the calendar windows, at 12 o’clock, is a triangle with two dots, a traditional feature on IWC’s earliest pilots’ watches from the 1940s as well as other aviators’ watches of that era. 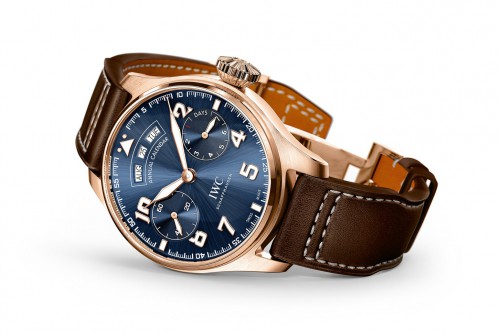 The back of the watch is just as attractive as the front, boasting a sapphire window with a view of the in-house-produced movement, IWC’s self-winding Caliber 52850. Its design is dominated by a solid gold rotor, with sand-blasted and polished surfaces, crafted to resemble a drawing by Saint-Exupéry of the titular Little Prince standing on a flower-bedecked asteroid gazing at the stars. The decorative rotor revolves eccentrically around its own axis (symbolizing the far-ranging journey taken by the Little Prince in the book), with the small figure acting as a counterweight. Below the rotor, the movement beats at a rapid frequency of 28,800 vph (4 Hz), while the week-long power reserve is stored in twin mainspring barrels.

The strap of the IWC Big Pilot’s Watch Annual Calendar Edition “Le Petit Prince” is made of dark brown Santoni leather, with beige-colored ornamental contrast stitching. The folding clasp is made of made of case-matching 18k rose gold. I had a chance to try on the watch and examine it up close at SIHH 2016. 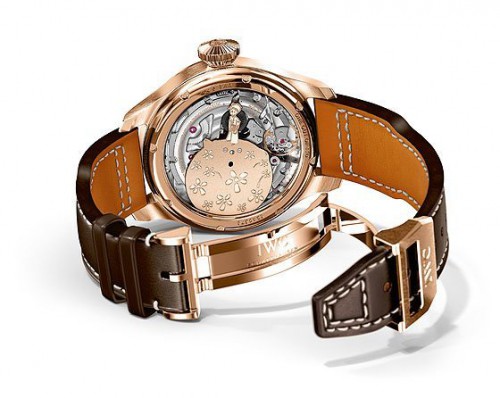