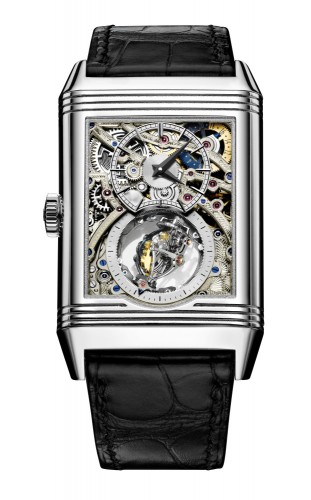 The Reverso is a sports watch, a fact that a lot of people these days forget because of the likes of the Rolex Submariner and the Omega Seamster. Back in the late twenties and early thirties English gentlemen in India loved to play polo which is a sport played on horseback with mallets on a long pole, the perfect way to break a crystal on a watch. The players thought enough was enough and went to the local representative for a small, old Swiss watch company and asked if they could come up with something that would let them wear their lovely wristwatches while protecting the dial of the watch. That little Swiss watch company came up with what’s still a revolutionary watch even today. Jaeger-LeCoultre still makes the Reverso today and we’re very excited to reveal one of the most complicated variants of the Reverso ever made. 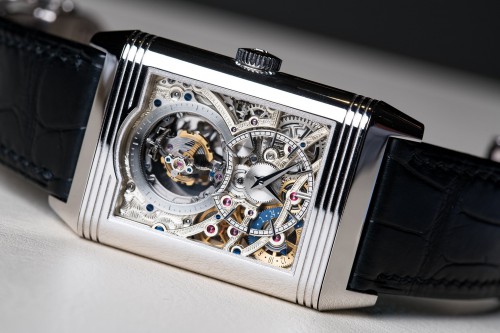 Jaeger-LeCoultre is known for making superfluous complicated movements. Chronographs, minute repeaters and, of course, tourbillons. Jaeger-LeCoultre actually manufactures three kinds of tourbillon, the ‘normal’ one which is still amazing and used to prevent gravity affecting accuracy. The Spherotourbillon watch which makes use of a tourbillon rotating in a pure sinusoidal motion in order to counter the effects of gravity in a simulated 3D way. Jaeger-LeCoultre has also taken this complication one step further by making what’s known as a Gyrotourbillon. This method uses a system of gears to rotate the balance wheel on three axes which can counter the effects of gravity whatever position the watch is in. A clever little touch on this watch is the balance wheel which has been made into the anchor shape of the logo of the company. 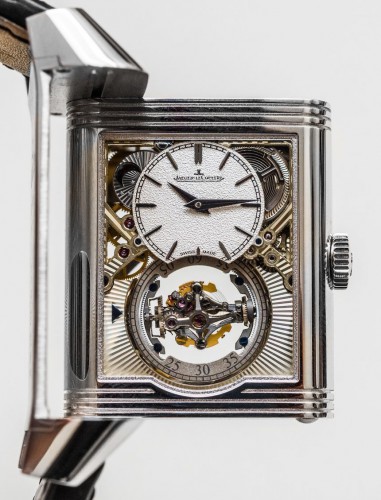 Both sides of the new Reverso have been hand decorated exquisitely with leaf engraving patterns on the supporting arms required to hold the skeletonise movement in position. As well as dauphine hands, the watch also features a day and night indicator which has been discreetly placed at 10 O’clock on the main dial side. One of the main reasons one would purchase a Reverso would be for the practicality of two independent faces to be used as time zones, it’s great to see that Jaeger-LeCoultre has remembered these little details when making the watch.