Linde Werdelin updated their Oktopus II Moon watch- Oktopus Moon Gold 3DTP Carbon watch. It uses a carbon bezel which came in a titanium and gold version. The brand says this piece is as much a dress watch as it is a sports watch. 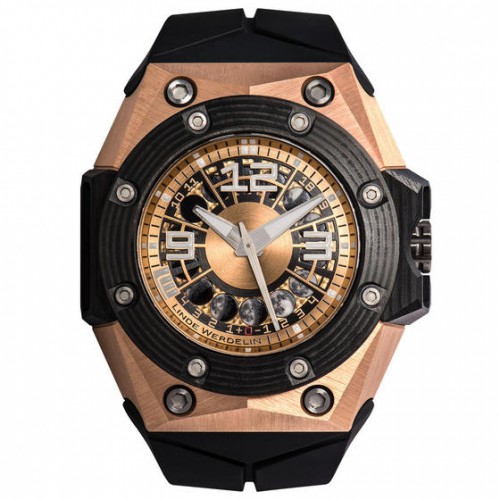 So, what exactly is interesting about the 3DTP carbon used for the bezel? In a technique that, according to Linde Werdelin, took years to master, they layered thin sheets of carbon in order to create the angular and sharp case. They claim the layers of carbon catch light and reflect it back, which creates an illusion of depth. Linde Werdelin is really fascinated by how materials play with and reflect light. Take the Oktopus MoonLite White watch that utilized their “Alloy Linde Werdelin” (ALW) which is an “aerospace material” specifically used in that watch to absorb light and mimic the way an Octopus changes colors. Where that watch went for a light motif, the dark 3DTP carbon with the 18k rose gold provides a rich, dark look with the Linde Werdelin Oktopus Moon Gold 3DTP Carbon watch. 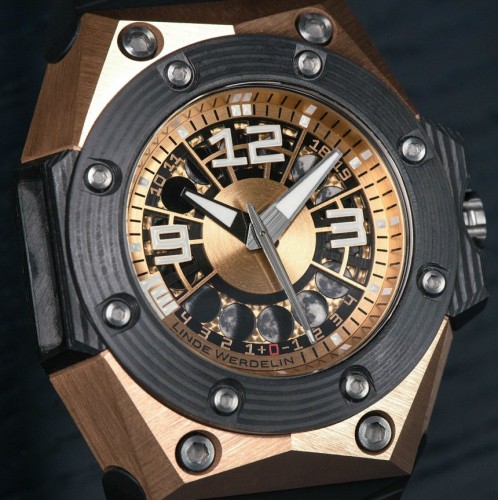 Similar to their other moon phase watches, this watch is going to be made in a limited run of 59 pieces. Those familiar with Linde Werdelin know by now that the reason for that number is that 59 represents the number of days it takes for the moon to complete two lunar cycles. The first Oktopus II Moon Watch actually introduced Linde Werdelin’s Moon Phase complication, and this piece carries on the tradition using the photorealistic images of the moon across the dial. Their in-house moon phase movement remains unchanged from previous versions, with a 42-hour power reserve and operates at a frequency of 28,800vph (4Hz). 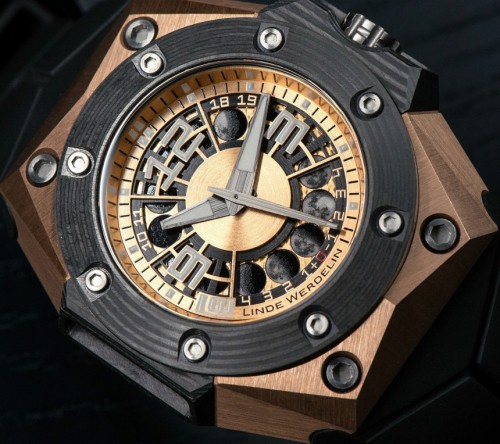 You still have a 44mm-wide case with the octopus gracing the titanium case back – two hallmarks of the line. On the dial, you’ll notice the red “o” which is used to indicate the current phase of the moon on the five-layered skeletonized dial. It’s a legible watch, with the hands in titanium with a grey luminova. There are touches of the 5N rose gold throughout the dial, such as on the 3, 9, and 12 numerals, the moon disc with circular perlage surface, the rehaut, and top of the dial. As for the strap, you’ve got an interchangeable rubber strap with a DLC-coated titanium ardillion buckle. 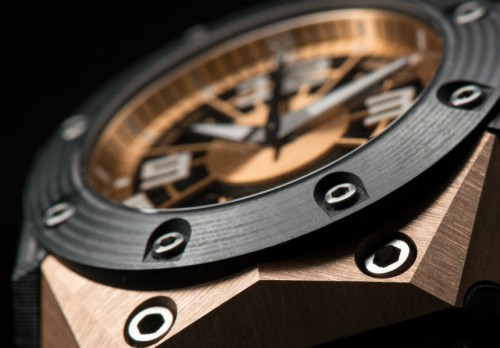 I find that some of the small details on the case and dial really add the touches that bring this watch together in a cohesive way. The microbille finish on the 3DTP carbon bezel and carbon/gold lends a richness of texture to the piece. Additionally, I have to say, there is also something about the rose gold moon disc in conjunction with the moon phases that is so visually fulfilling to me. Perhaps it’s a matter of personal preference, but the color scheme really works, in my opinion.