Longines has been synonymous with elegance and luxury; and if there’s one icon that defines these values it’s Kate Winslet. To further strengthen her association with the watch company, the Oscar winning recently visited its head office at Saint-Imier, and was left spellbound. Read all about her visit here.

She created a special space in our hearts with her remarkable performance in Titanic. Recently, she visited the company’s head office, the place where the brand was created back in 1832. Along with the President of the watch company, Walter von Känel, she explored the essence of horology, as well as the rich heritage of the venue.And over the years, with different roles, Winslet has only maintained her demure grace and charm. She joined the Swiss watch brand Longines in 2010 as the Ambassador of Elegance.

Kate personally visited the worktables where the brand’s watches are so lovingly and meticulously crafted, and saw the production and assembly processes. She even toured the Longines Museum and selected a unique timepiece that will be re-issued for the benefit of the Golden Hat Foundation. Co-founded by Winslet around six years ago, Golden Hat is a non-profit organisation that is dedicated to changing the public perception of people on autism. She selected a flagship collection watch, which will celebrate its 60th anniversary in 2017, and will be re-issued then. The proceeds of the sale would go charity. 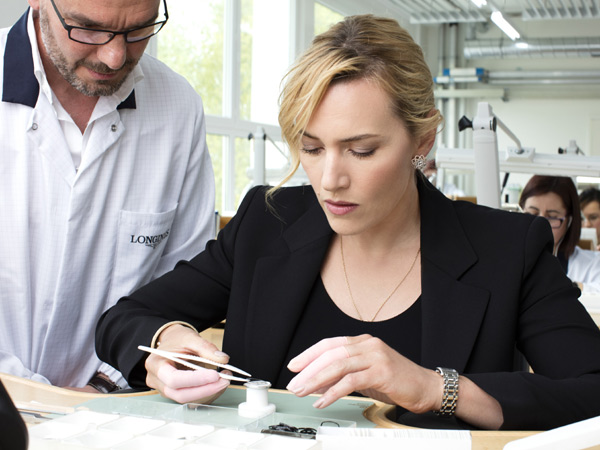 Kate learnt about the fine art of watch making from the expert staff at Longines. Sharing her experience, she says, “I was delighted to learn that Longines is so in touch with its rich history from which it draws inspiration for creating new works of art that adhere to its values. I am deeply grateful to Longines for the support they have shown for the Golden Hat Foundation-an organisation that is dear to my heart-by re-issuing the watch that I have chosen today. It makes me incredibly proud to be able to contribute to raising public awareness around the situation individuals with autism face.”

The employees at Longines, as well as Walter von Känel, were enchanted by Kate’s innate charm and spirit during her visit to Saint-Imier. We’re sure this visit will result in a timeless timepiece that benefits the Golden Hat Foundation.

Here’s a glimpse of Kate Winslet’s visit to the museum: