Just how and why this has been possible is a fascinating narrative that starts with just two episodes of religious intolerance, persecution and exodus, and also a civic uprising in Poland. The genesis of Patek Philippe watches is intimately linked to the city of Geneva, which had established itself as a watchmaking hub in the early 16th century, aided in part by Calvin’s strict religious agenda banning ornamentation along with the wearing of jewellery, although watches were tolerated.The watchmaking industry also got a boost from overseas when, in 1572, King Charles IX of France authorised a bloody persecution from the Protestant Huguenots, instigated by his mother Catherine de Medici. Founded in background as the St. Bartholomew’s Day massacre, French Calvinist Protestants, which included skilled jewellers and watchmakers, were mercilessly persecuted and fled the country in terror. The identical scene was repeated in 1685 and another batch of Protestant exiles left France when Louis XIV made a decision to reevaluate the Edict of Fontainbleu (aka the Revocation of the Edict of Nantes). Both persecutions in France led many Protestants to find asylum in the more compatible religious climate of Calvinist Geneva. What these intolerant rulers hadn’t taken into consideration is that when an entire section of your population flees, it’s often accompanied with the occurrence of brain drain. Just look at what happened when Spain expelled the Jews and the Moors in 1492. Considering that the strict Calvinist mood, many of those exiled jewellers and painters turned their hand to watchmaking, marrying the refined methods of painting on teeth and gem-setting into the art of watchmaking.

A little background on the history of calendars is vital to understanding the importance and value of one of Patek Philippe’s most renowned complications – the perpetual calendar, the subject of a recent seminar in Singapore organised by the Geneva watchmaker.

Calendars – the world’s earliest horological devices – were the result of our ancestors’ attempt to divide time, a task that took centuries to complete. Early units of time were organized by observing astronomical cycles, which helped mankind regulate his existence, aiding agriculture, hunting and the observing of religious holidays.

A calendar begins with three natural rhythms that form the basis of what perpetual calendars accomplish, starting with the speed at which the Earth rotates on its axis, which forms the day. A larger rhythm is the moon’s orbit around the Earth that gives us the month. And finally the Earth’s orbit around the Sun, a route that takes approximately 365 days, or one calendar year.

Relying on complex formulas, the intricate gears and springs inside a perpetual calendar flawlessly amalgamate the three independent cosmic rhythms. Horology is thus synonymous with astronomy, charting the relationship between the Sun, Moon, and Earth, cyclical in pattern and perpetual in nature. 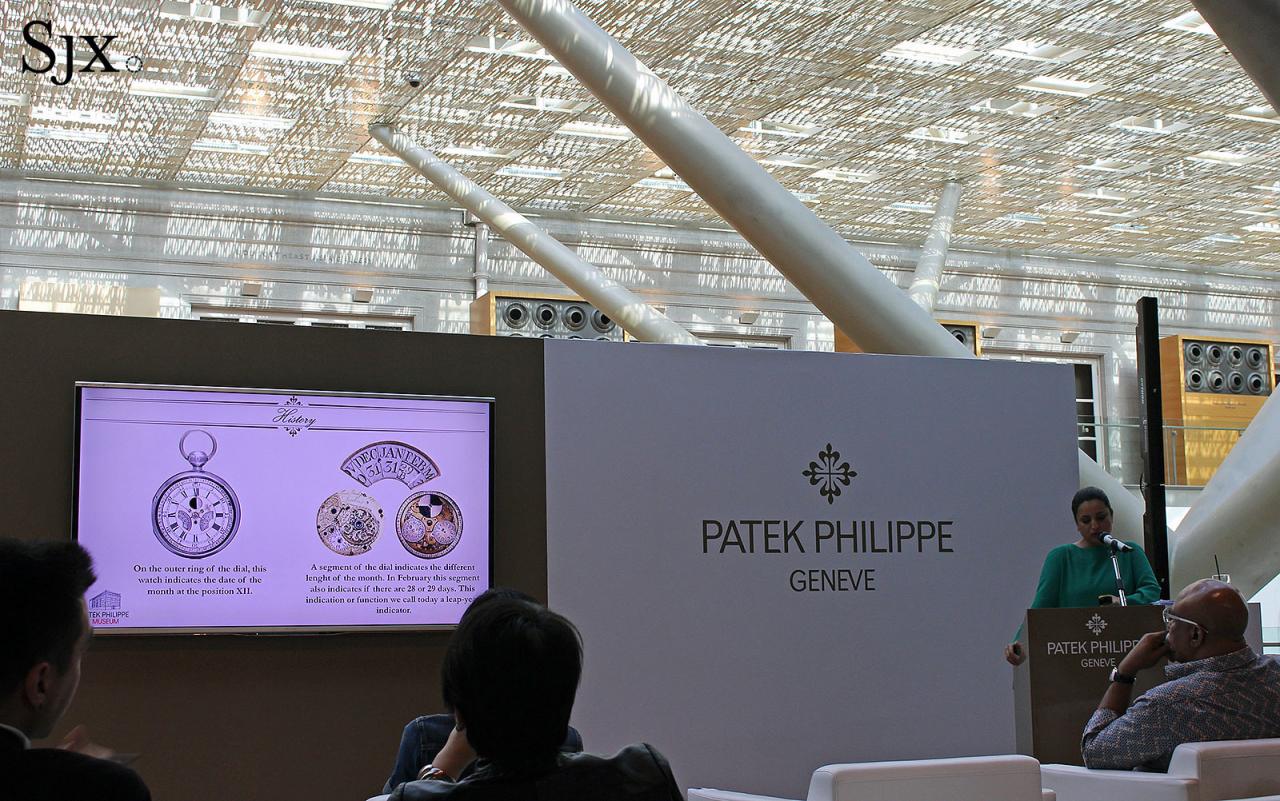 Patek Philippe perpetual calendars see the lunar calendar depicted in the moon phases, and the solar Gregorian calendar indicated in the date windows on the dial.

Special gearing is required to account for irregular occurrences, such as the varying lengths of months – the pesky 28-day month anomaly instead of 30 or 31 – and the leap year once in every four years, making it a considerable step up from annual calendars, which cannot handle anything outside of 30- and 31-day months.

It also means that as long as the watch is kept wound and running, a perpetual calendar only need to be adjusted once a century.

ONE: The first perpetual calendar wristwatch was a Patek Philippe

Patek Philippe did not invent the perpetual calendar, English watchmaker Thomas Mudge did in the 18th century. In fact, Sotheby’s sold an example of a Mudge perpetual calendar pocket watch dating to 1762 – perhaps the oldest one ever – just last year for £62,500.

It took Swiss watchmakers a century or so to catch up, with one of the earliest perpetual calendars by Patek Philippe being a pocket watch manufactured in 1864 that’s now in the company museum. Fitted with an enamel dial, the pocket watch features an instantaneous date, retrograde date, day, month indications in Spanish and moon phase.

Patek Philippe does, however, lay claim to the first ever wristwatch with a perpetual calendar. It was produced in 1925, and came about due to a good deal of chance. Patek Philippe made the movement in 1898, but for a women’s pendant watch. However, the pendant watch remained unsold for lack of interest so in 1925 Patek Philippe decided to put the compact movement into a wristwatch case. At only 34.4mm in diameter, the watch was finally sold in October 1927 to Thomas Emery, an American who also owned several other high-end Patek Philippe timepieces. 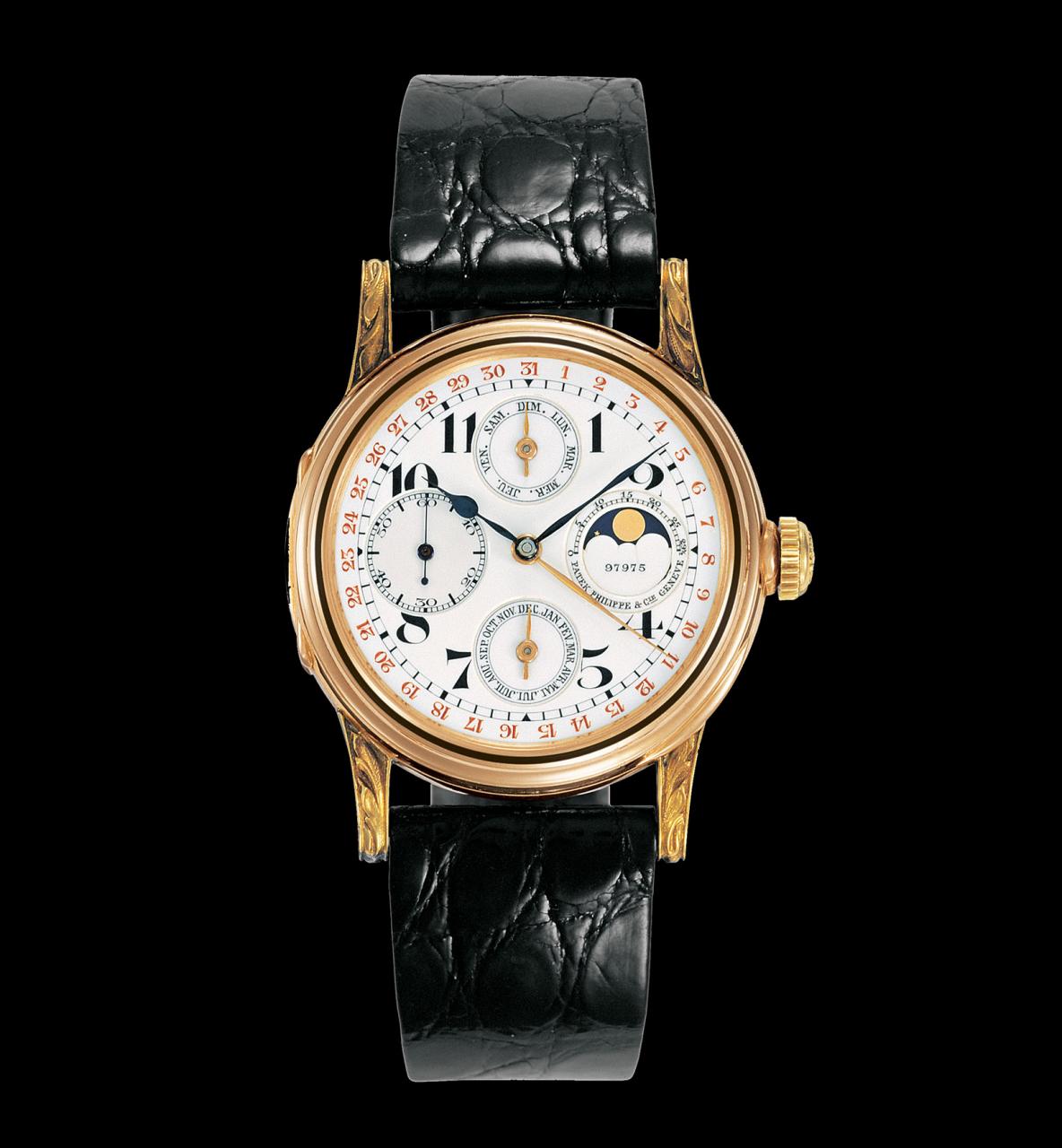 The first perpetual calendar wristwatch, circa 1925 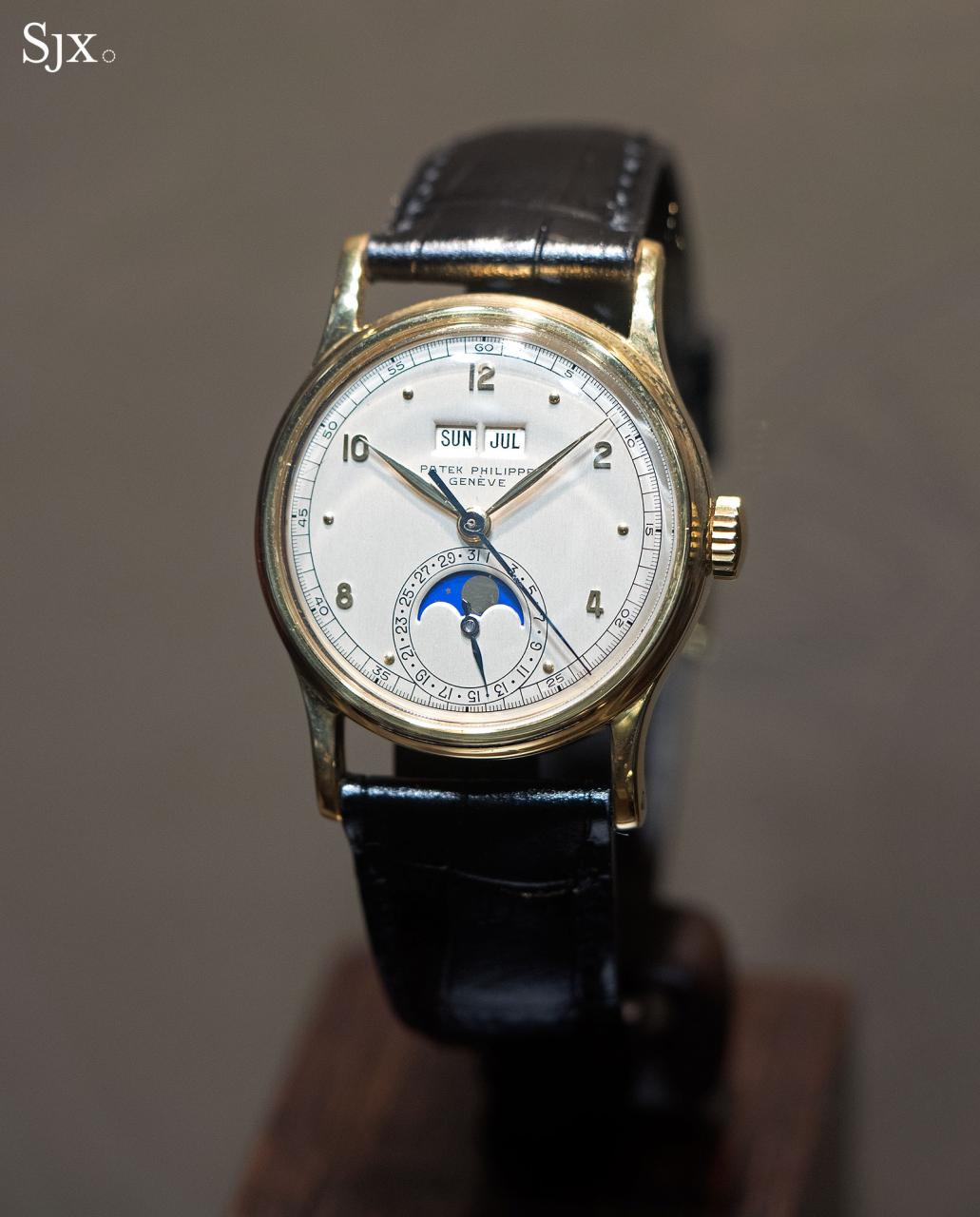 Patek Philippe perpetual calendars feature complex dials with various types of displays, namely aperture-based and sub-dials. Aperture displays include the triple in-line and twin in-line, which get their name from the calendar windows arranging linearly on the dial. 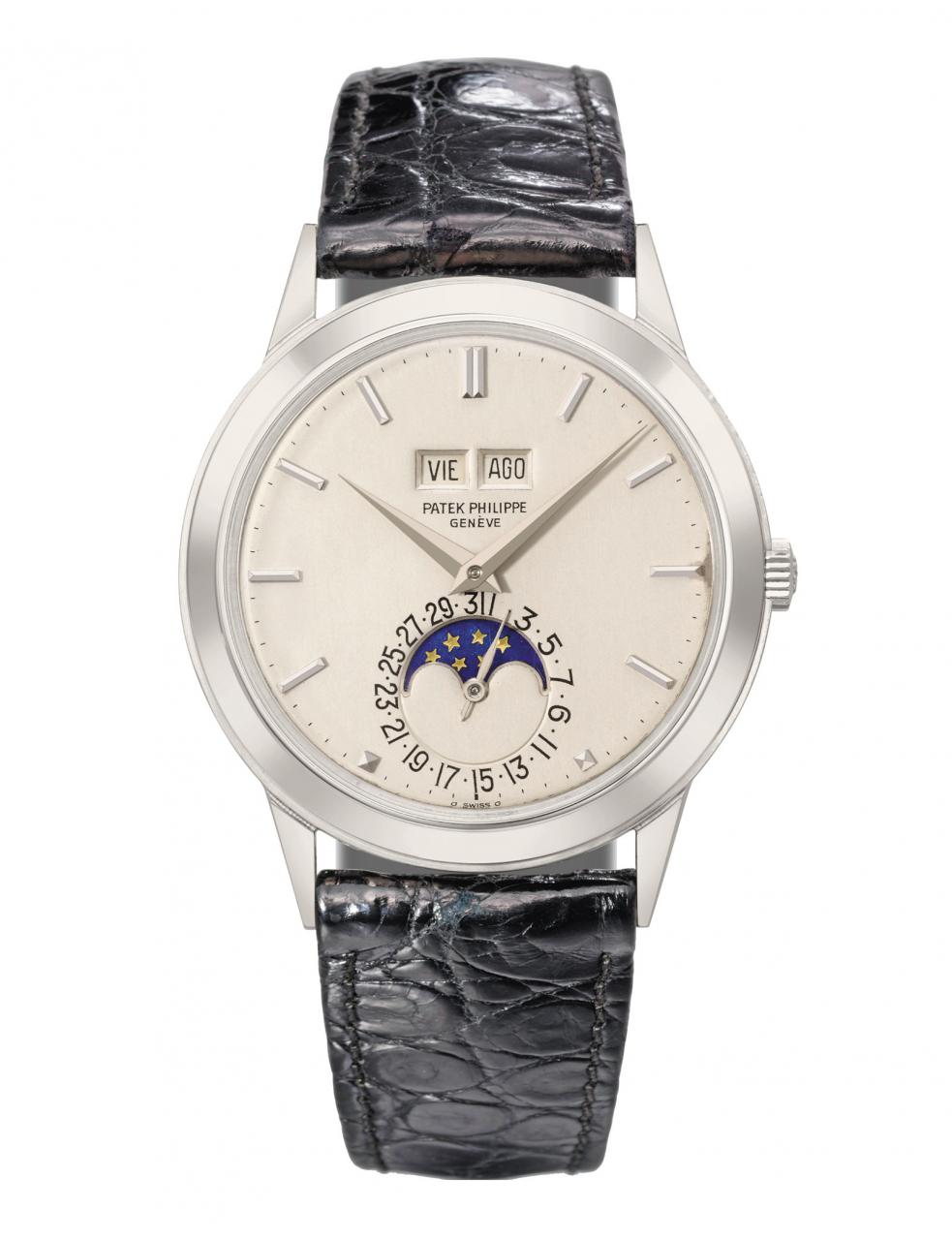 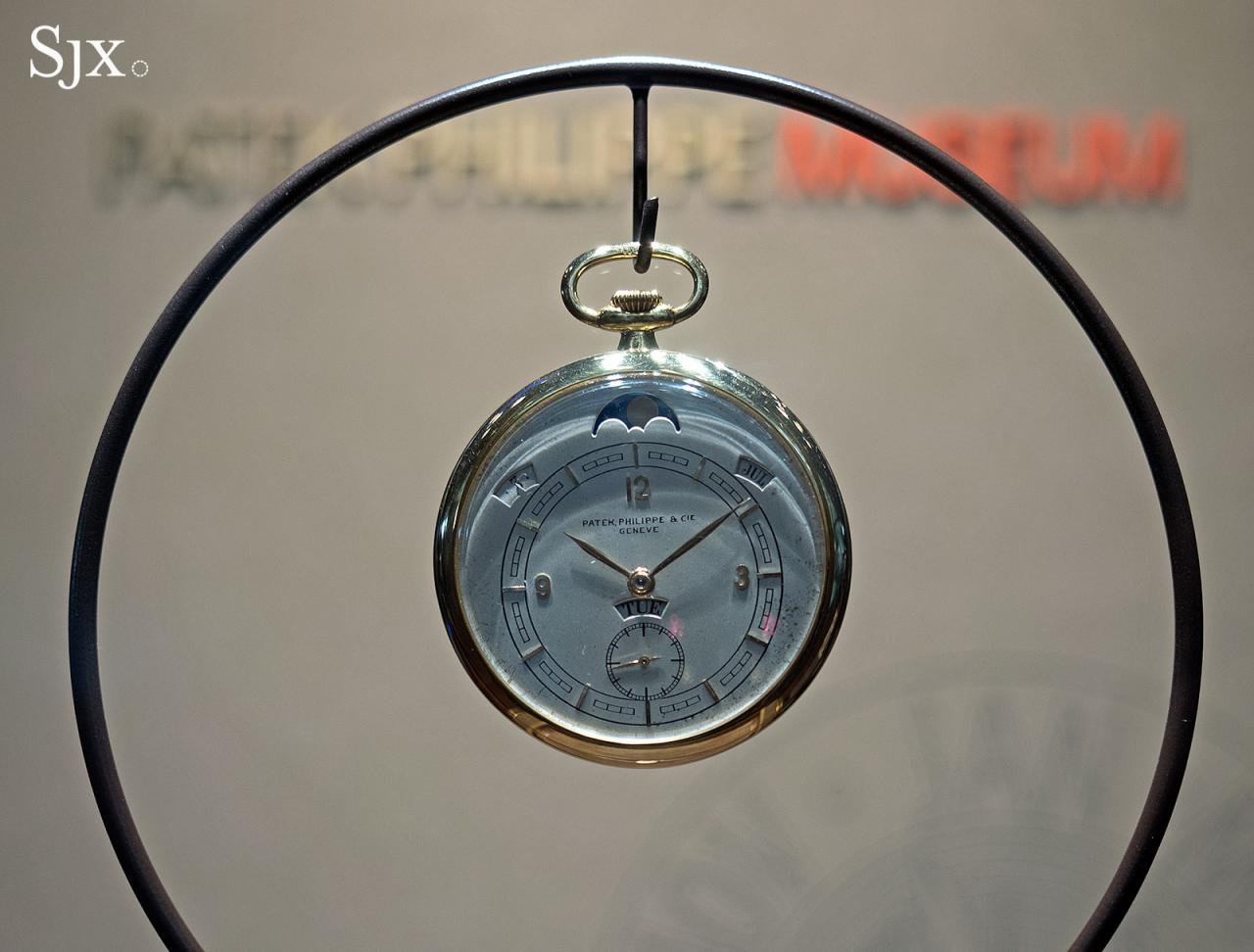 A 1928 perpetual calendar pocket watch with aperture display, powered by a movement built on a Victorin Piguet ebauche.

Arguably the quintessential perpetual calendar aesthetic, the sub-dial based displays typically have three smaller dials for each of the calendar functions. This style began with the ref. 3940 of 1985 powered by the cal. 240 Q, and has now evolved into over a dozen different models. 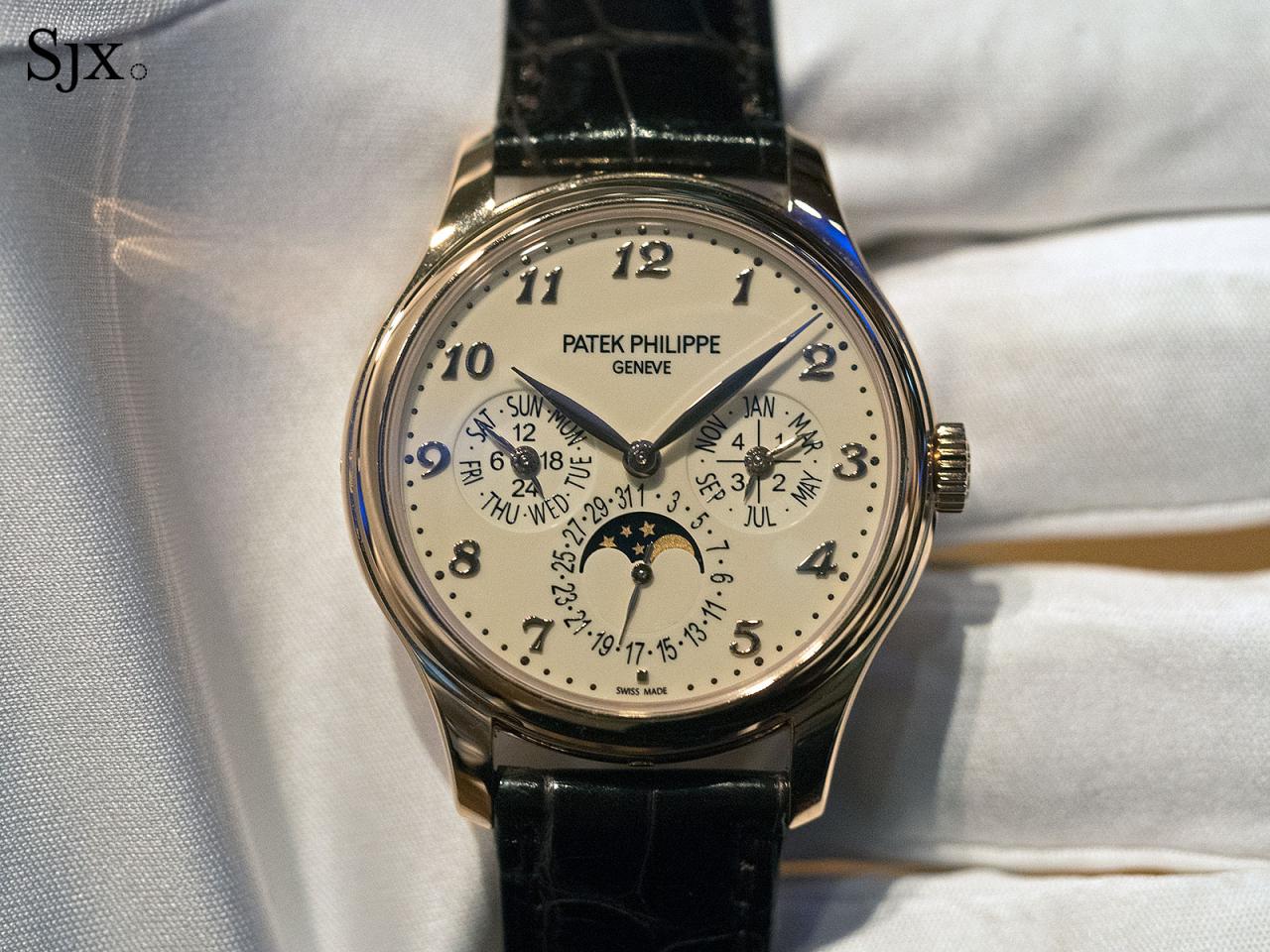 The ref. 5327J, the latest iteration of the classic perpetual calendar with sub-dials

And the third type of display often found on Patek Philippe perpetual calendars combines apertures with a retrograde date display. The first serially produced watch to feature such a display was the ref. 5050 introduced in 1993, though Patek Philippe did create a one of a kind example in 1937. 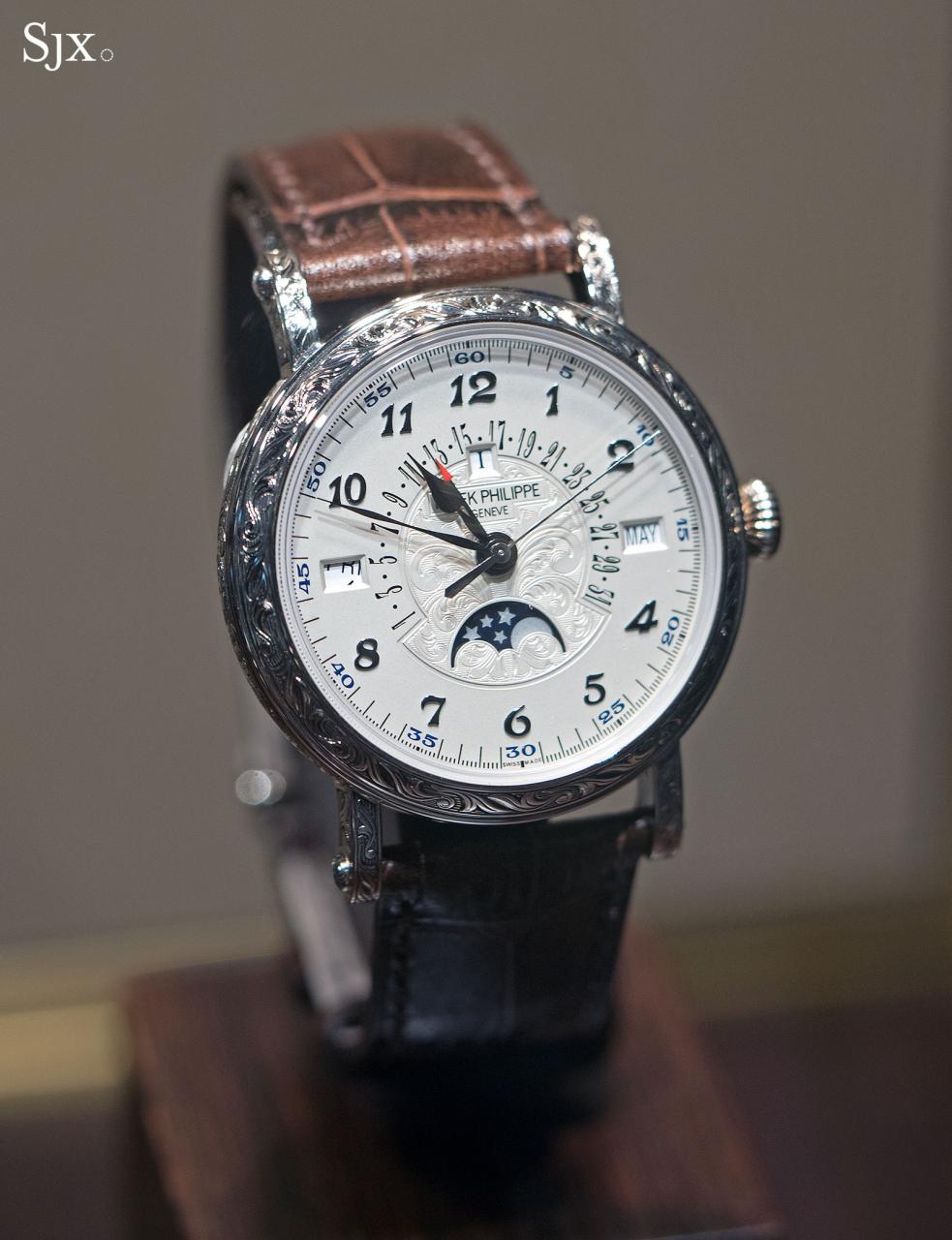 The modern day ref. 5160/500G with a retrograde date and hand-engraved case

Just as the displays differ, the manner in which the indicators change are similarly diverse. Perpetual calendars are executed with various types of jumping indicators. The simplest is the dragging, where the indicator changes slowly over a period of time. A dragging date display, for instance, will take several minutes to change at midnight.

Then there is the semi-instantaneous, which has both dragging displays for some parts of the calendars and instantaneous jumps for others. This is the most common sort of mechanism, found in most Patek Philippe perpetual calendars, including the recent ref. 5230G. 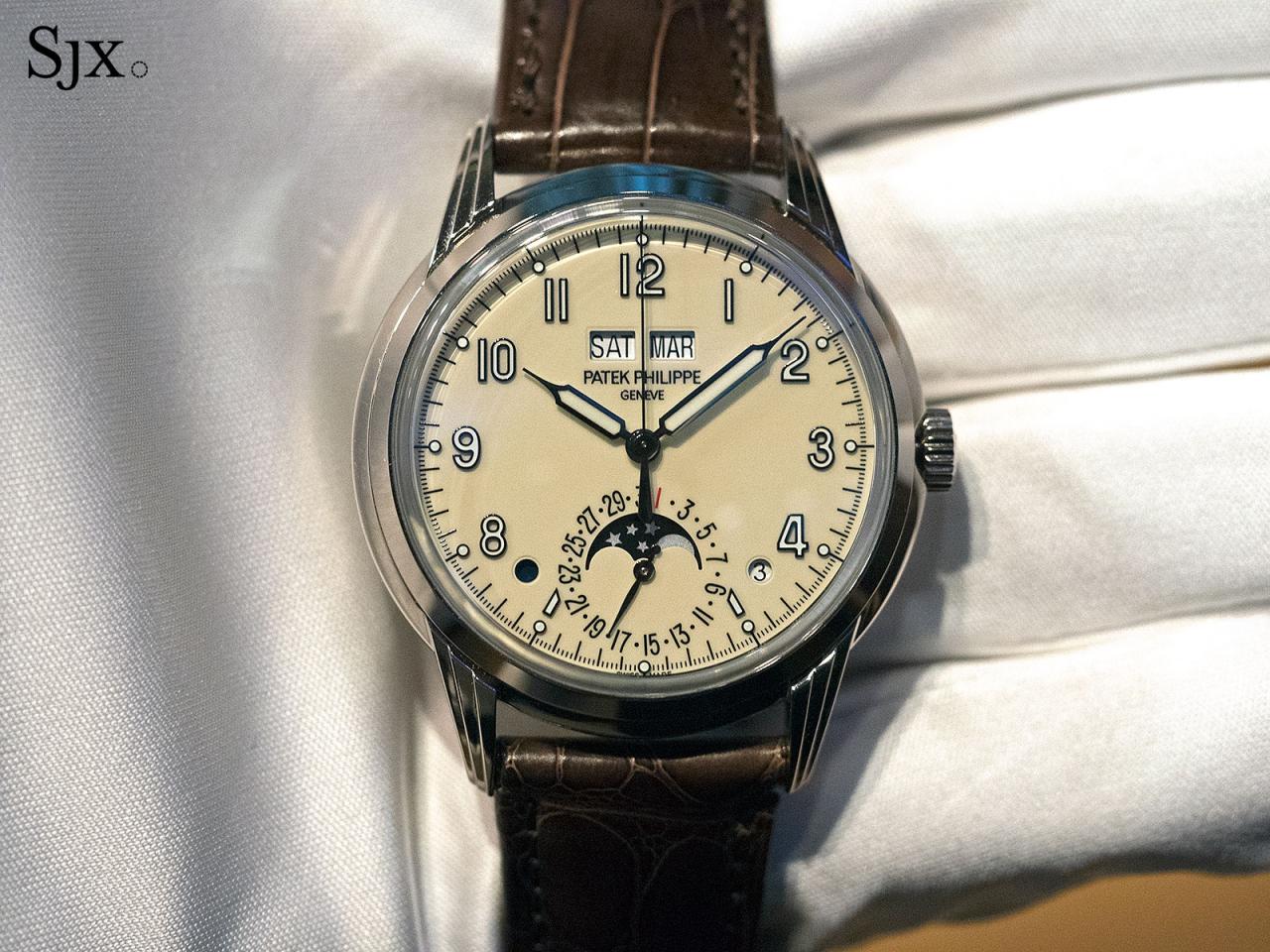 The most impressive of all is the instantaneous perpetual calendar, which Patek Philippe introduced in 2008 with the ref. 5207P. That was followed by the ref. 5208P (a favourite of Thierry Stern’s and often on his wrist) in 2011, which featured the addition of a mono pusher chronograph.