Vacheron Constantin firstly introduced the  Quai de l’Île in 2008. a it is an ambitious wristwatch with a complex, 10-part case that could be customised with each component in a different metal.

Now Vacheron Constantin has stripped the Quai de l’Île of many of its intriguing but superfluous features, distilling it to the essentials and making it more affordable. The new Quai de l’Île is in stainless steel, and retains many of the recognisable design elements of the original.

The 41 mm case is the same cushion shape, but constructed in a simpler manner with the lugs being part of the case middle instead of separate, screwed-on components. A similar rationalising has been applied to the dial: it keeps the same Arabic numbers that distinguished the original, and the streamlined style improves its legibility. While the original had an exposed date disc, the new steel Quai de l’Île has a fixed date disc made of clear mineral crystal with a triangular pointer that travels round the dial.

Inside the new Quai de l’Île is the self-winding calibre 5100/1 that has a 60-hour power reserve and is hallmarked with the Geneva Seal. The movement is practically identical to the calibre 5100 inside the Overseas ref. 4500V introduced at SIHH 2016, except it lacks the luxury of a solid gold rotor. 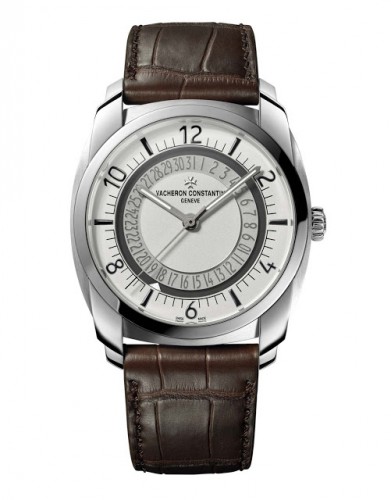