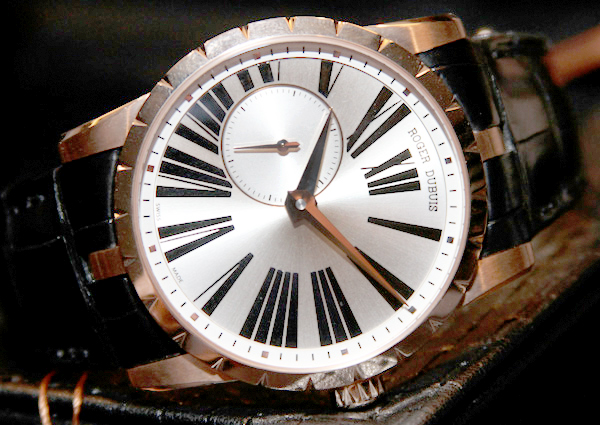 Scattered in this article and in the image gallery below are some images from Roger Dubuis’ 2012 ad campaign for the Excalibur collection. I don’t know who they hired for this and other ads, but when I saw them I was like “whoa….!” The fantasy loving Tolkeinist inside of me was like “holy crap, finally a wrist watch for Middle Earth denizens.” With a name like “Excalibur” it is no surprise that they would take a fantasy-style medieval approach to the artwork for the ads. Though it was done in a way not like what you often see in the snooty and conservative world of expensive timepieces.

Over the last few years Roger Dubuis has reinvented itself a few times. I am going to spare discussing this for this topic for the second or third time, but you can read more in previous Roger Dubuis articles I wrote in 2012. The last piece I discussed was the remarkably difficult to define yet plainly cool Roger Dubuis Pulsion timepiece collection. 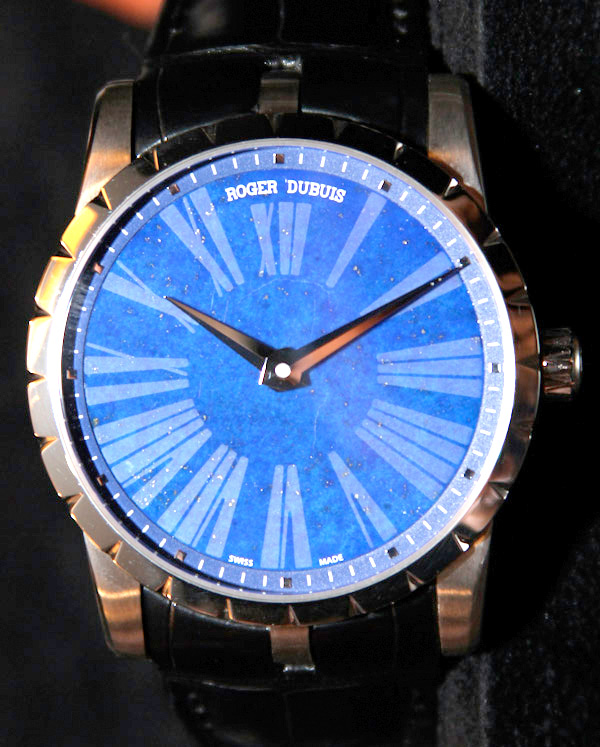 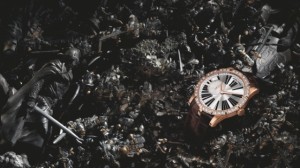 For 2012, Roger Dubuis offers a new smaller version of the Excalibur watch. It comes in a few versions and is a nice choice as an addition, rather than replacement, of the previous Excalibur models. The Arthurian-sword-named collection always had those very cool sharp-looking Roman numeral hour markers and sword-like dauphine hour and minute hands. Very rarely does a watch name fit the design so well. Being a Roger Dubuis, it also comes with a Knight of The Round Table suitable price.

The new model is the Excalibur 42, which is, not surprisingly, 42mm wide. That is down from the lavish 45mm width of the other models. It feels good on the wrist at 42mm wide, but the larger-than-life style of the case and dial also look good in the larger case as well in my opinion. A thin bezel and wide looking dial help this watch to look and feel its largest. That is of course aided by the widely spaced lugs with a third lug segment built into the middle – for good measure. The non limited edition version also gets a sizable subsidiary seconds dial which helps out the size nicely. The limited versions come in jewelry form as well as the “Automatic Precious Dial” variety such as the pictured model with a blue lapis lazuli dial. 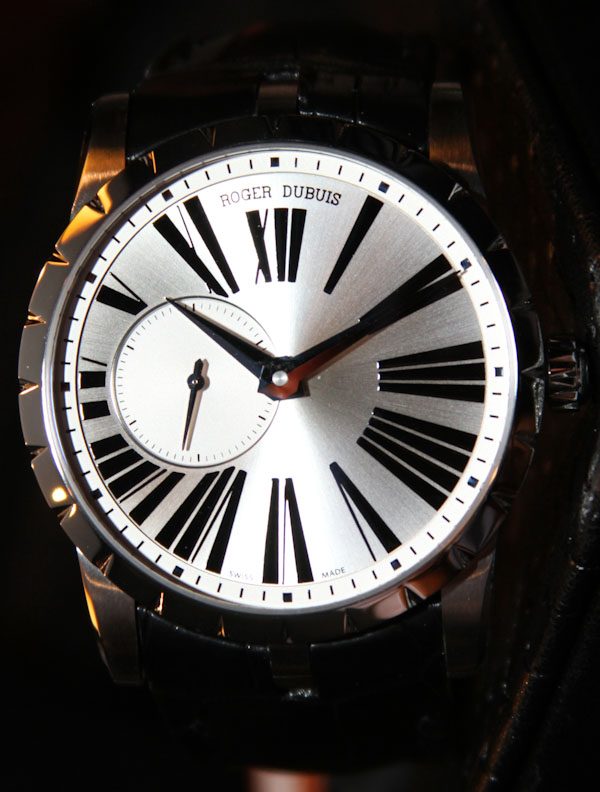 I wonder what a bracelet on this watch would look like? Hmm… For now we get custom fit alligator straps in brown or black. What I like is that Roger Dubuis offers a version of the Excalibur 42 in steel. There are also 18k white and rose gold versions (of course). What do you think of the “serrated” style bezels? I’ve always liked them but they aren’t for everyone. As you can see, the Excalibur 42 has a variety of metallic toned dials to choose from. Though the more I look at it, the more I like the blue lapis lazuli version. 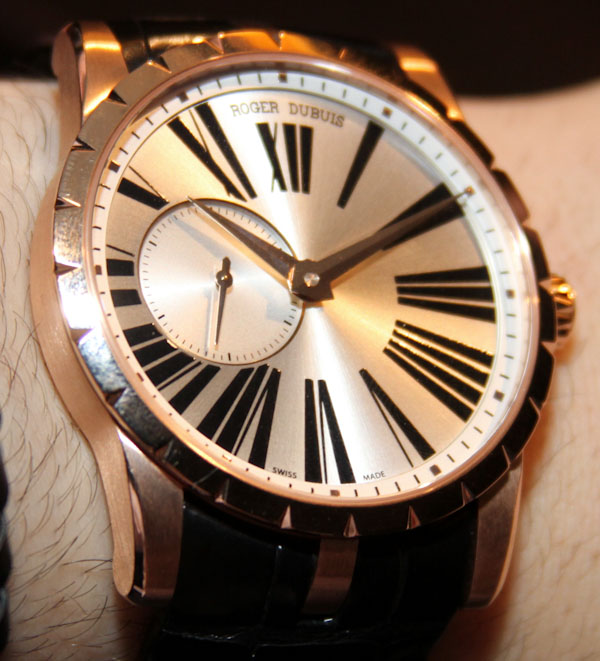 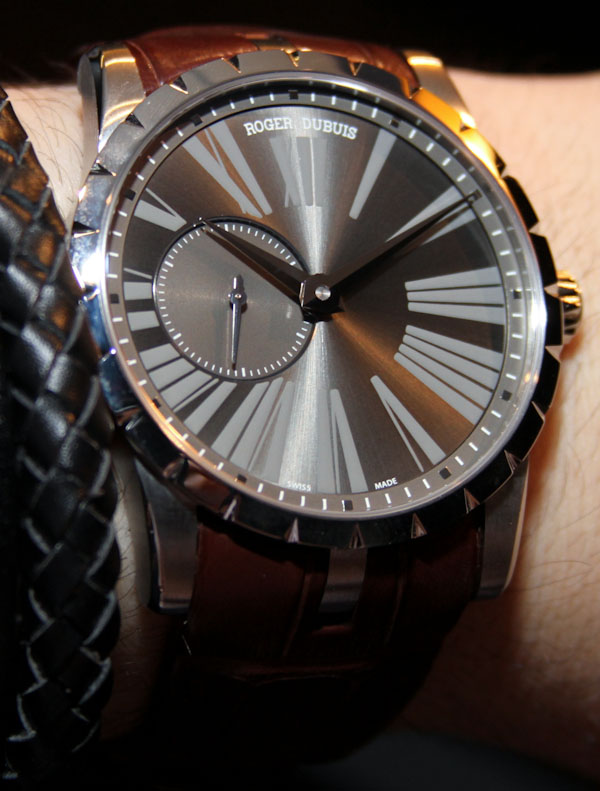 Inside the Excalibur 42 is a new Roger Dubuis in-house made automatic movement. It is the caliber RD620 automatic. Really nicely made, it features a micro-rotor and beautiful finishing. Roger Dubuis doesn’t always come across as one, but they are principally a movement maker at heart. Just think of all the tourbillons (as well as double tourbillons) that they make. Oh, and the limited edition versions of the Excalibur 42 have a different movement called the RD622. It is basically the same as the RD620 automatic, but sans a subsidiary seconds dial.

Overall I like the new Excalibur 42 collection, but still prefer the larger size and slightly more intricate dials of the past. At this size a bit of femininity takes over making these “uni-sex” watches. They are still masculine at heart, but few guys at Roger Dubuis would choose one of these over a Pulsion. In the end it is another bold, acquired taste design with a good looking in-house made movement from Roger Dubuis. Price likely starts north of $10,000.