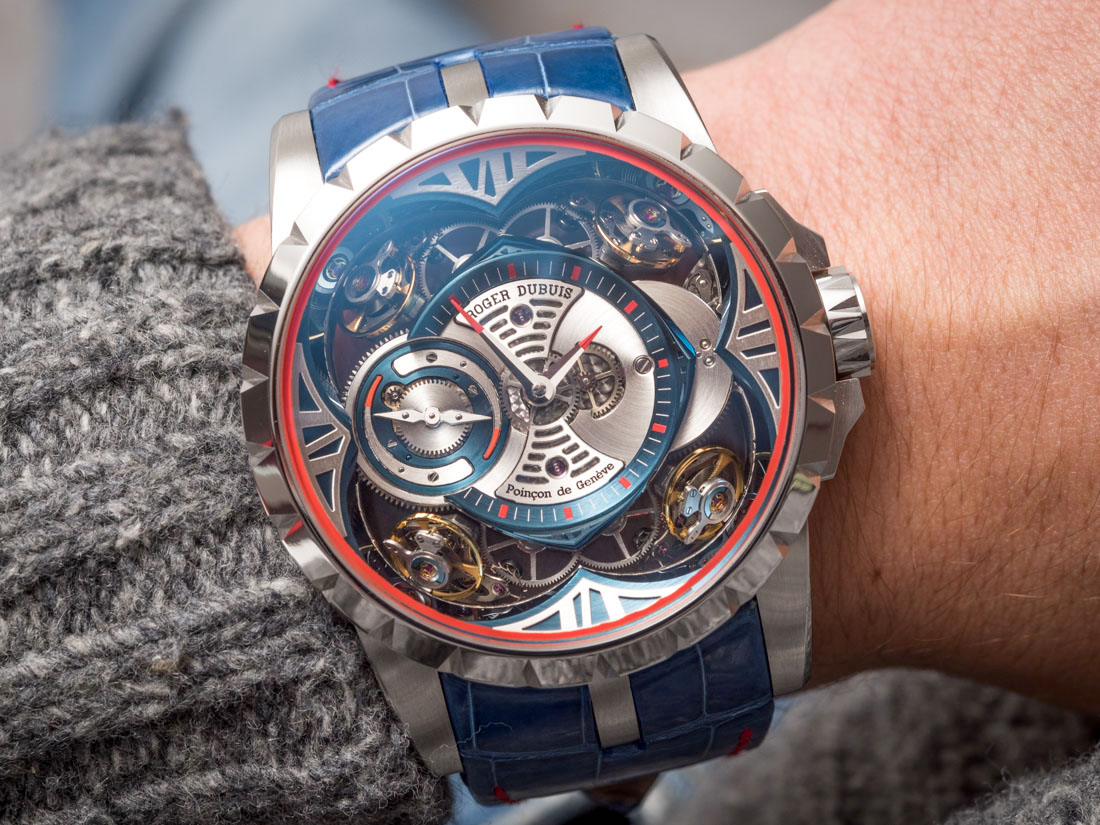 Roger Dubuis has been on a spree of material innovation lately. A few weeks ago, I looked at the Excalibur Carbon Spider Watch which had the first movement to feature significant use of carbon – specifically, the movement plate, bridges, and tourbillon upper cage were done in carbon. We also got to go hands-on with this watch, the Roger Dubuis Excalibur Quatuor Cobalt MicroMelt which is the first watch in the world to feature a case constructed entirely out of something called cobalt chrome – a high-strength alloy that serves as a suitable backdrop for the watch’s impressive quad layout balance.

Roger Dubuis released the first Excalibur Quatuor model back in 2013, and they were already experimenting with materials on the watch, offering a silicon model in a limited edition of 3 watches each priced at a staggering $1,000,000. The Roger Dubuis Excalibur Quatuor Cobalt MicroMelt doesn’t get near that price. Though, it is also a limited edition, coming in only 8 pieces. What was visually impressive then remains as such – check out the video above of the four balances in action. 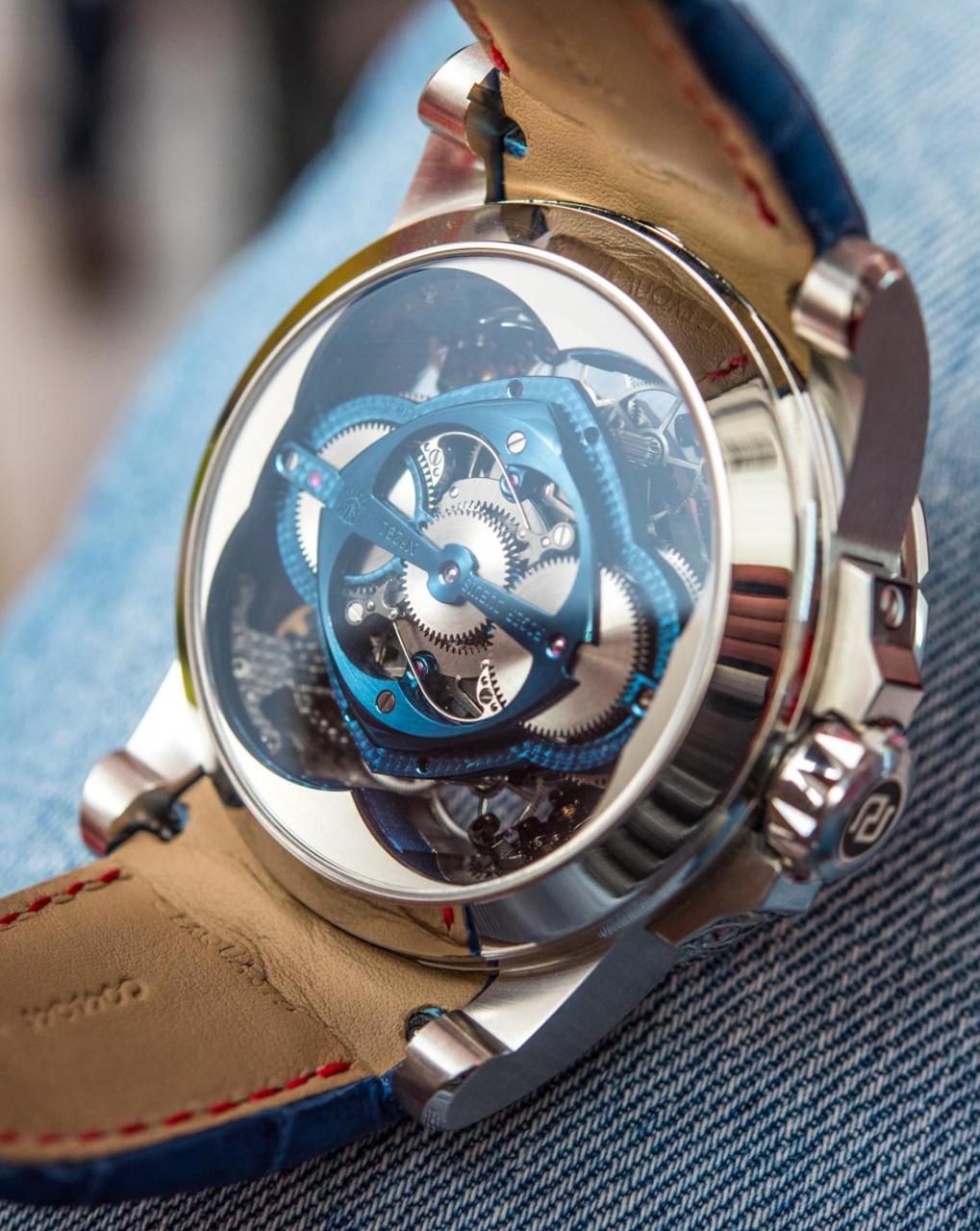 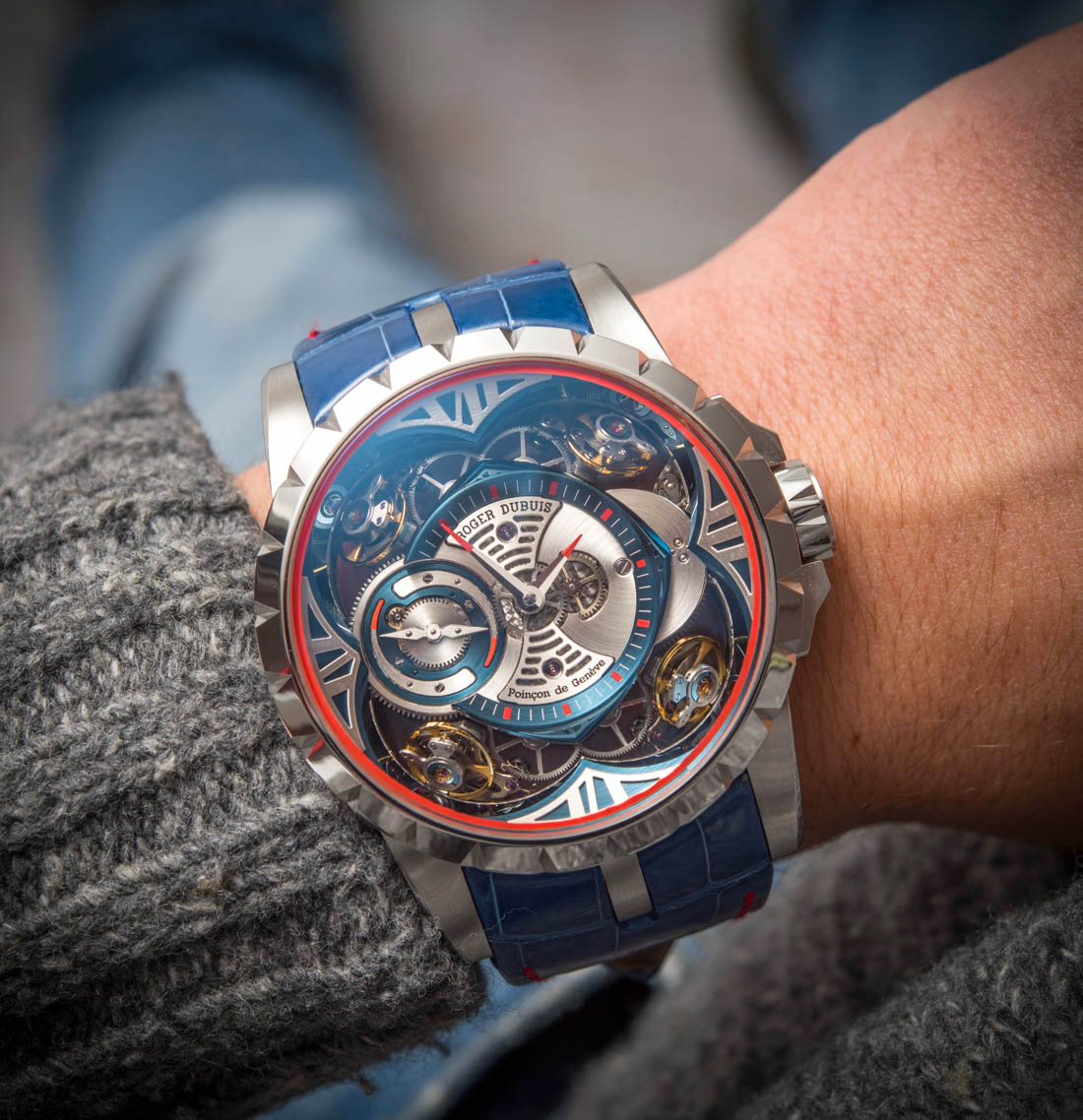 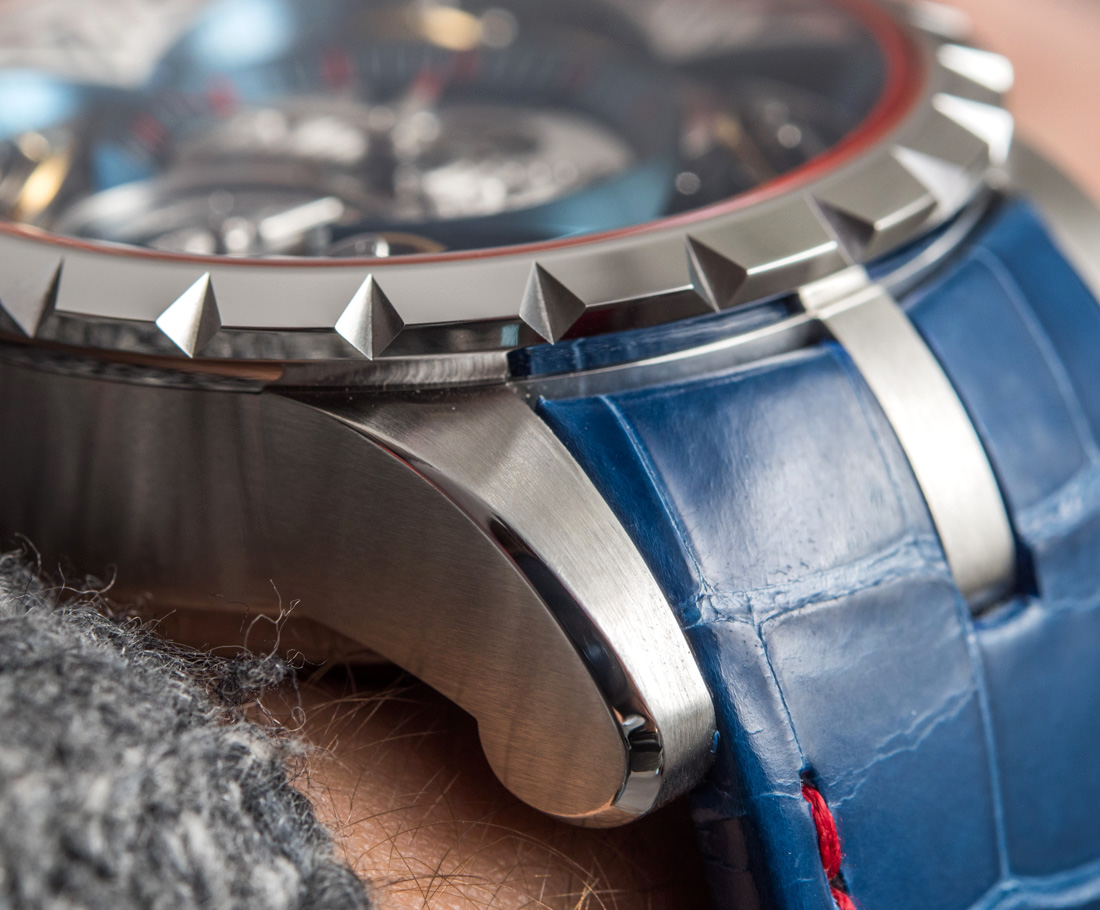 As our Kenny Yeo put it when we covered this watch’s release, “Cobalt chrome is an alloy with a very high specific strength and biocompatibility, and it is used widely in the medical and aeronautical industries to make turbines, artificial knee and hip joints, and even dental crowns.” And as for MicroMelt, it’s the process that involves atomizing a molten alloy in a high-pressure gas stream.

The result is essentially a powder which is then subjected to blending, isostatic pressing, hot working, and processing. In this case, the process results in cobalt chrome. Additionally, many of the corrosion-resistant features of the watch are also due in part to the passive protection film that exists as a trait typical in most anti-corrosive metals. The vibrant sheen of the cobalt chrome coupled with the blue PVD on the plates and bridges is nothing short of a visual treat. 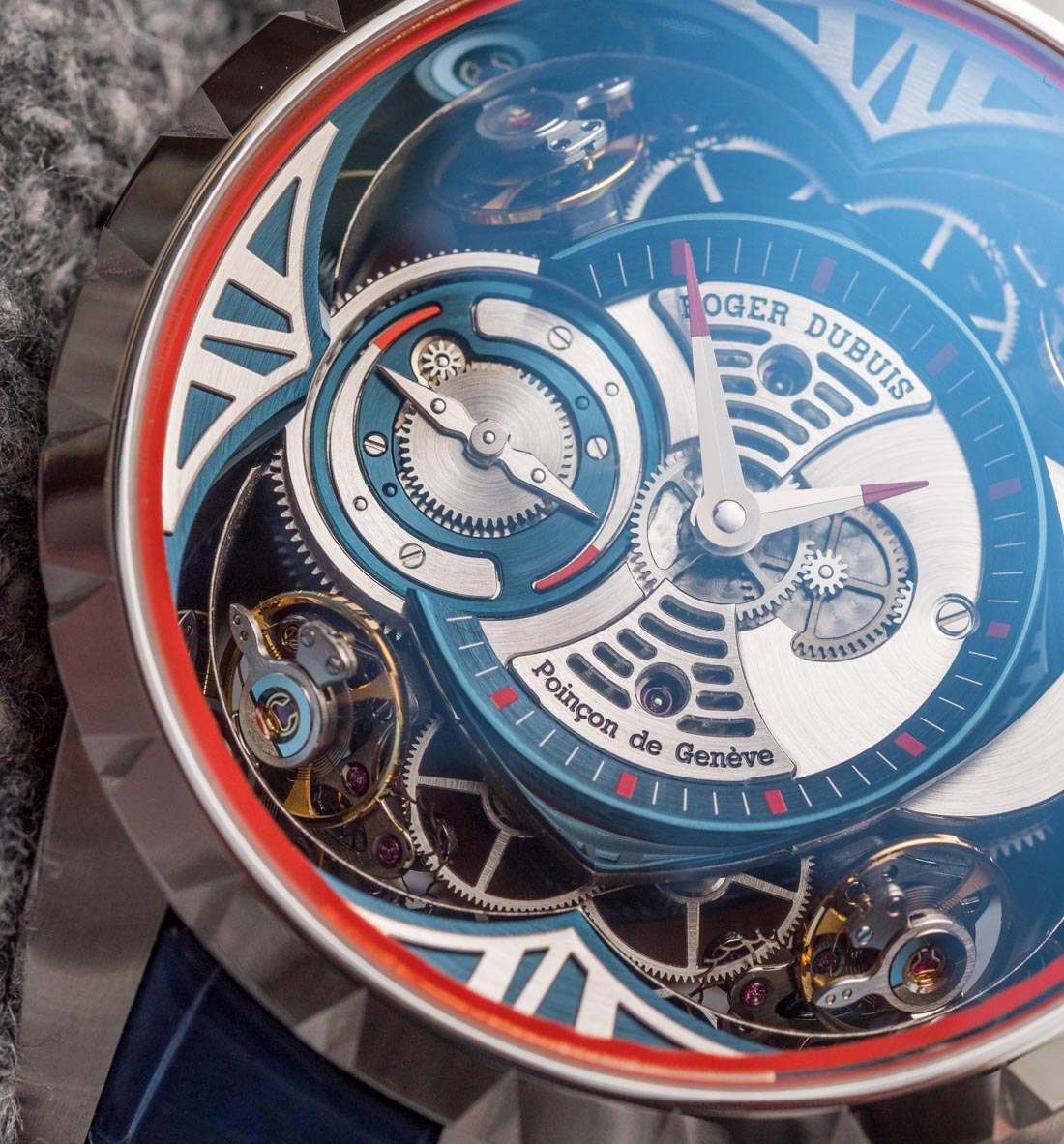 We wouldn’t be able to talk about a Quator watch without mentioning the array of four balances arranged symmetrically throughout the dial. They’re all angled at 45 degrees and occupy large internal cutaways that also leave most of the movement visible. In theory, these four balances linked by five differentials cancel out the effects of gravity on each individual balance. Whatever the reason may be for this approach, one thing is for sure – it looks really, really great. Check out the video above to get a close look at one of the balances in action. 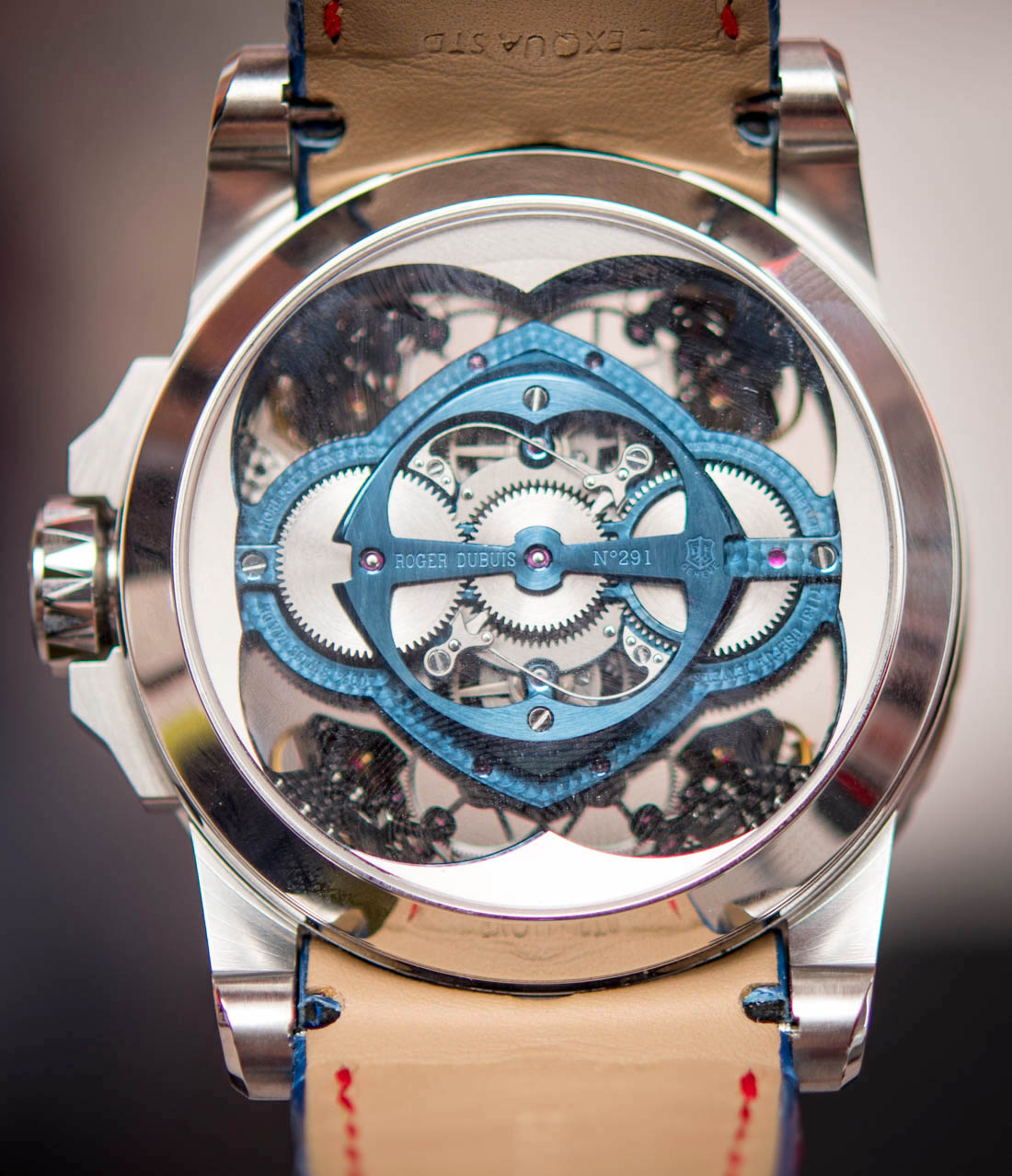 It is frequently stated that fast cars and expensive watches go together, and there’s surely some anecdotal evidence to support that. In the end, an expensive 200mph supercar has certain things in common with a $200,000 watch with double flying tourbillons. So it shouldn’t be a surprise to learn that Roger Dubuis’ new Excalibur Spider Dual Flying Tourbillon was designed squarely with car enthusiasts in mind.The new Roger Dubuis Excalibur Spider Double Flying Tourbillon has a 47mm-wide and 14.95mm-thick black DLC titanium case. The faces of this case contain over-molded orange rubber that provides the event a very racy appearance. The bezel is black DLC titanium also, and so is the crown. Such as the case, the crown can be rimmed by orange juice to add contrast and give it a more sporty look. To finish the racing look, the watch includes a orange and black perforated leather strap that has been lined with rubber. Water resistance is 50m, so the watch isn’t scared to get a small wet.Like all the additional Excalibur Spider watches, the newest Roger Dubuis Excalibur Spider Double Flying Tourbillon includes a heavily skeletonized dial. The skeletonization is expertly done, and by the front, an individual can make a sizable star-shaped bridge which supports the mainspring barrel. To the left about 9 o’clock, there is a power reserve indicator that’s been done up in the design of a gas estimate. Incidentally, the power reserve estimate is a new component that’s only present on the second generation Roger Dubuis Excalibur Spider Double Flying Tourbillon watches.At 7 and 5 o’clock, you’ve got the 2 stars of the watch – the double flying tourbillons. Both of these tourbillons spin at a rate of a revolution per minute and double up as running seconds screens. They also remind me of the flag of Italy, which is apt because Italy is home to supercar manufacturers like Ferrari, Lamborghini, and Pagani. 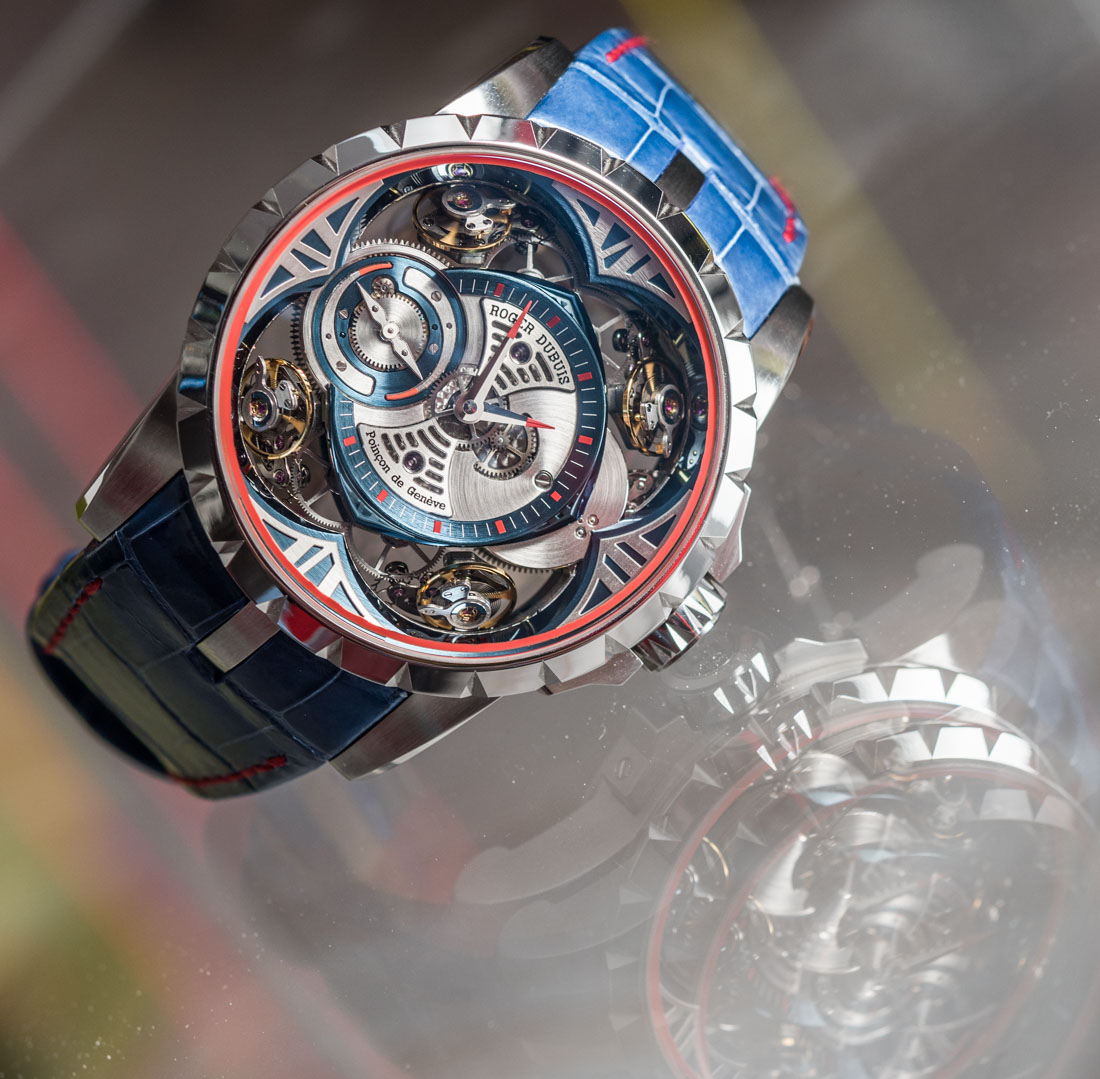 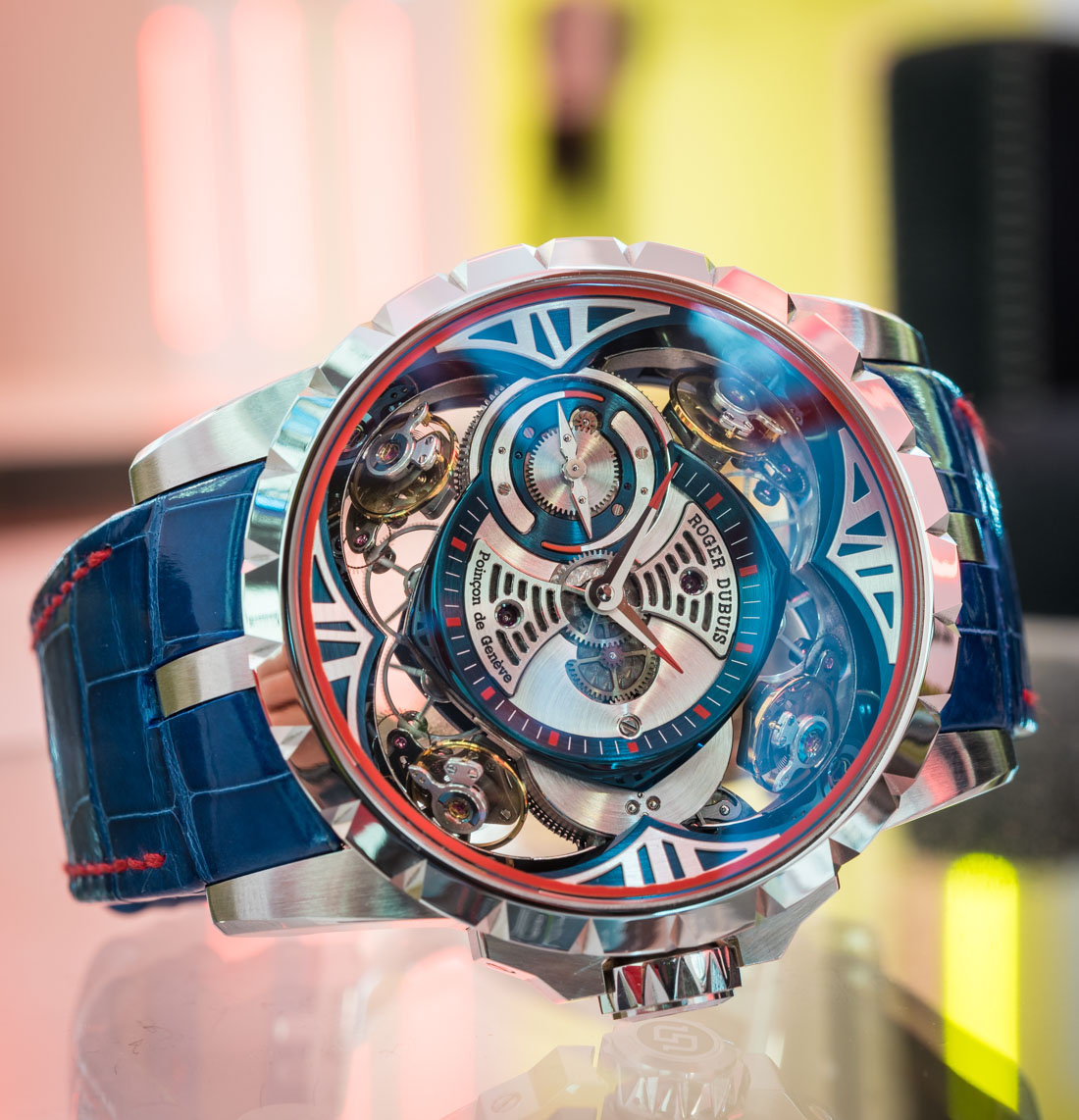 The Roger Dubuis Excalibur Quatuor Cobalt MicroMelt watch has a 48mm-wide and 18.38mm-thick case, so it’s definitely a big watch but that’s really in the Roger Dubuis DNA at this point. Looking at the case back, we see the near-kaleidoscopic symmetry Roger Dubuis achieves with the the RD101 movement – a Geneva Seal-certified, 590-component caliber that also delivers a stifled 40 hours of power reserve. Looking through the case-back, we find much of the same blue PVD execution seen on the dial with a bit more decoration throughout the plate and bridges.

Can I just add how cool the toothed bezel and the crown look – positively vibrant with their angles and the sheen of the cobalt-chrome. 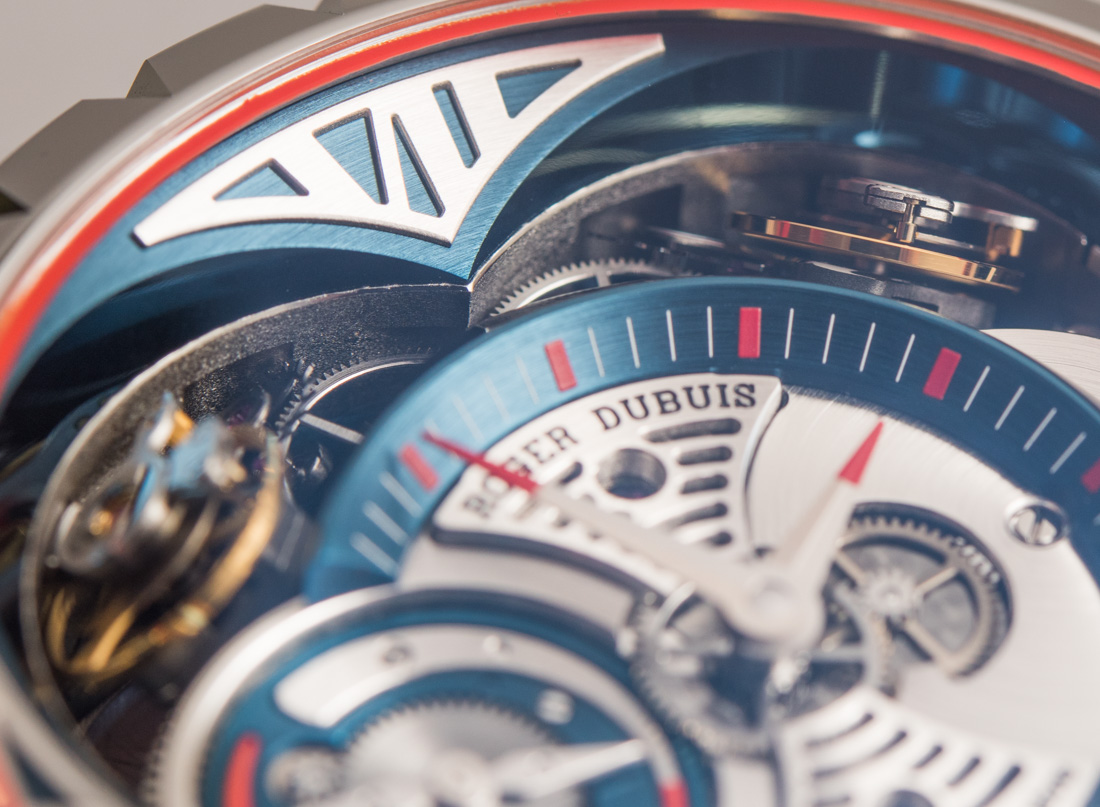 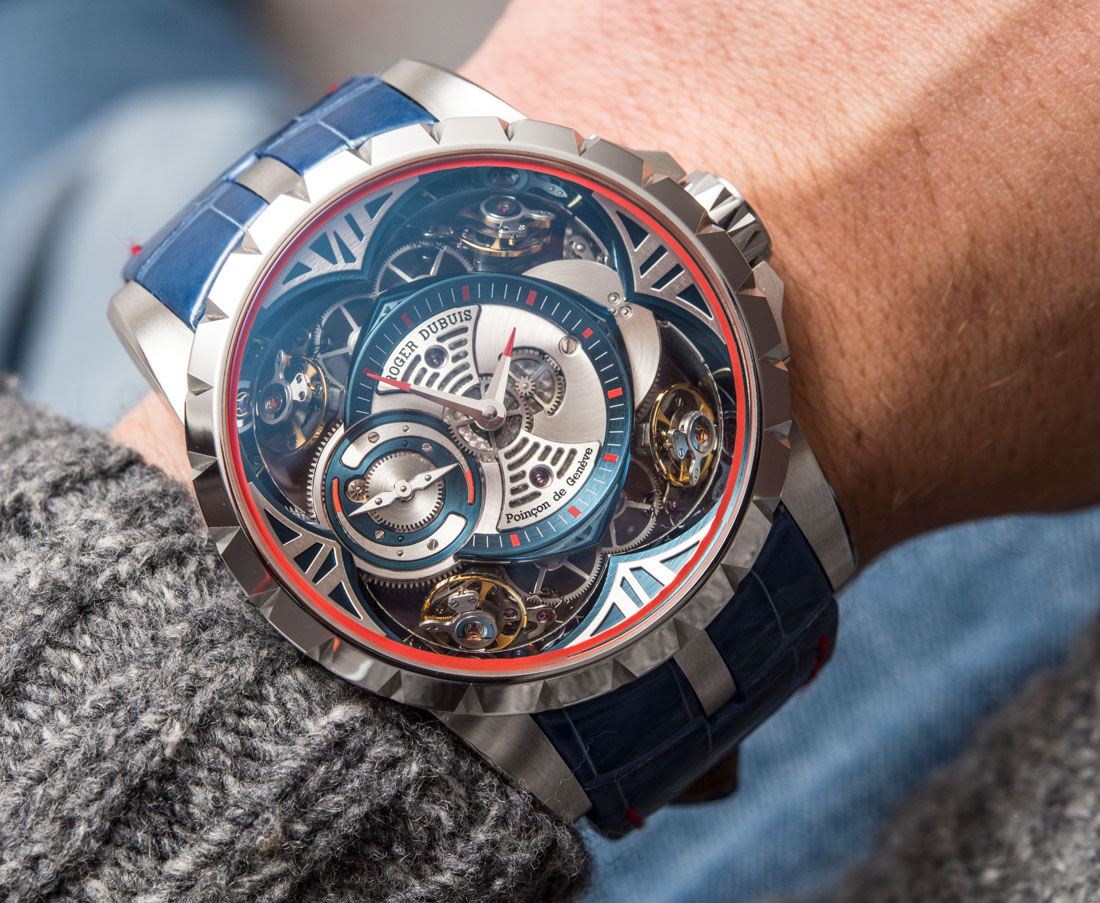 Not unlike other watches from the brand, the Roger Dubuis Excalibur Quatuor Cobalt MicroMelt blends a few automotive-inspired touches thanks to the minute track which, at least to my eye, is reminiscent of a speedometer. The hands are white gold with red tips and paired with a group of rhodium-plated indexes to complement the blue PVD and red color scheme I mentioned earlier. The same color scheme can be found in the power reserve indicator at 9 o’clock, which I found to be a playful touch considering how much of an afterthought most power reserve indications appear to be in other timepieces. 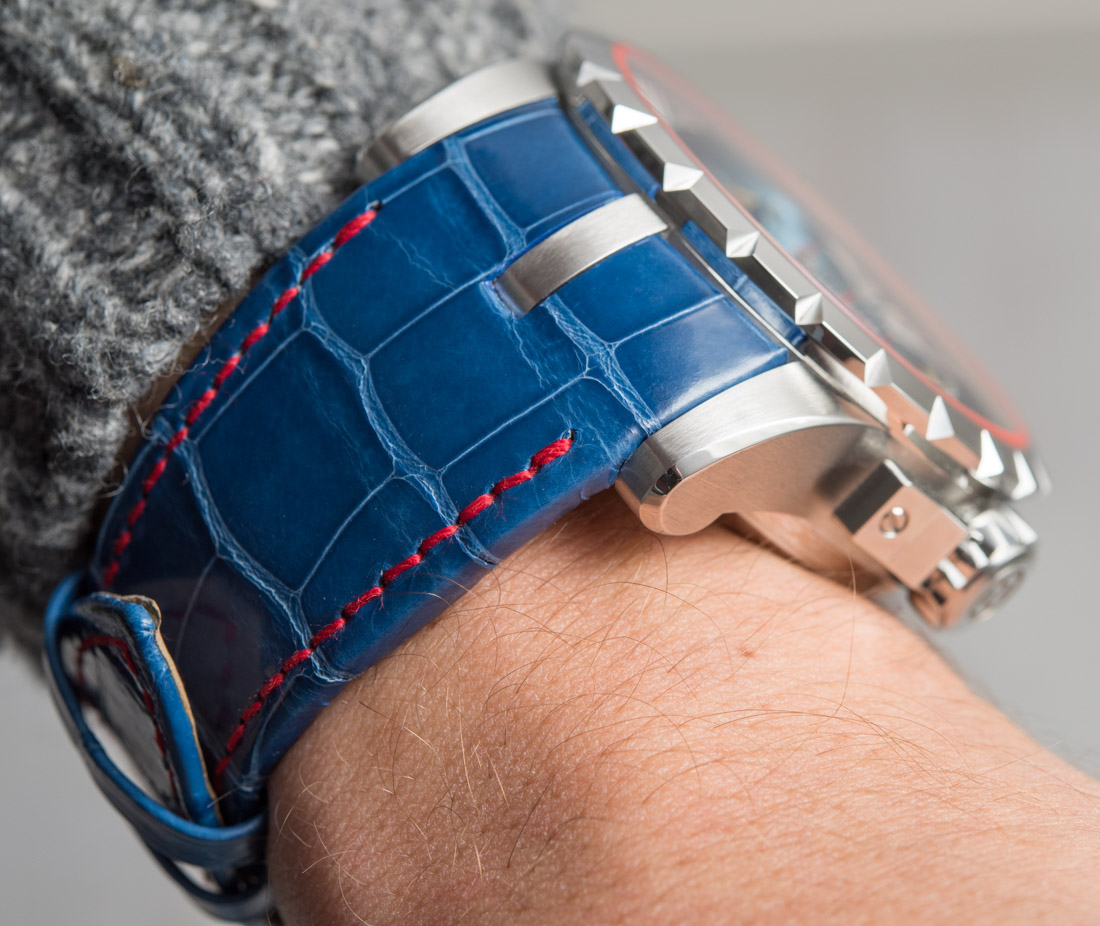 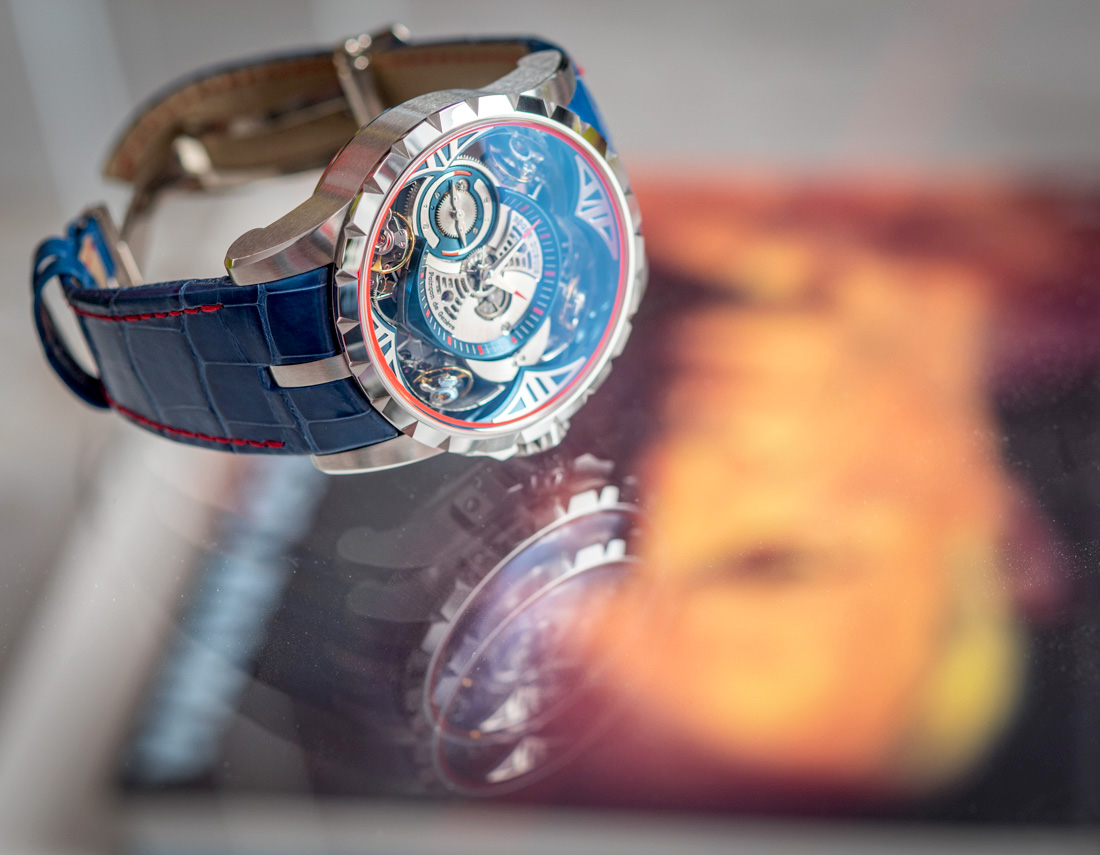 Roger Dubuis paired the Excalibur Quatuor Cobalt MicroMelt with a blue alligator leather strap featuring red stitching and a Grade 5 titanium clasp. While I can’t really recall the last time I saw an alligator strap with stitched accents, I found the matching color scheme to be a nice touch that brought even more balance to the watch. 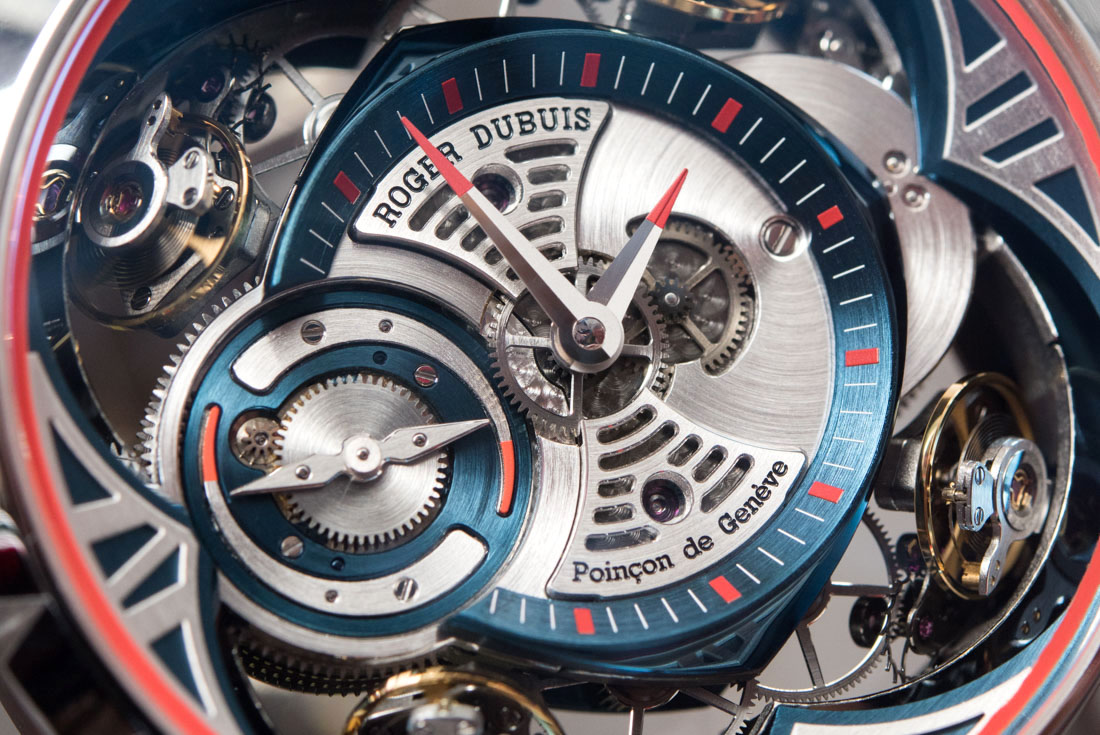 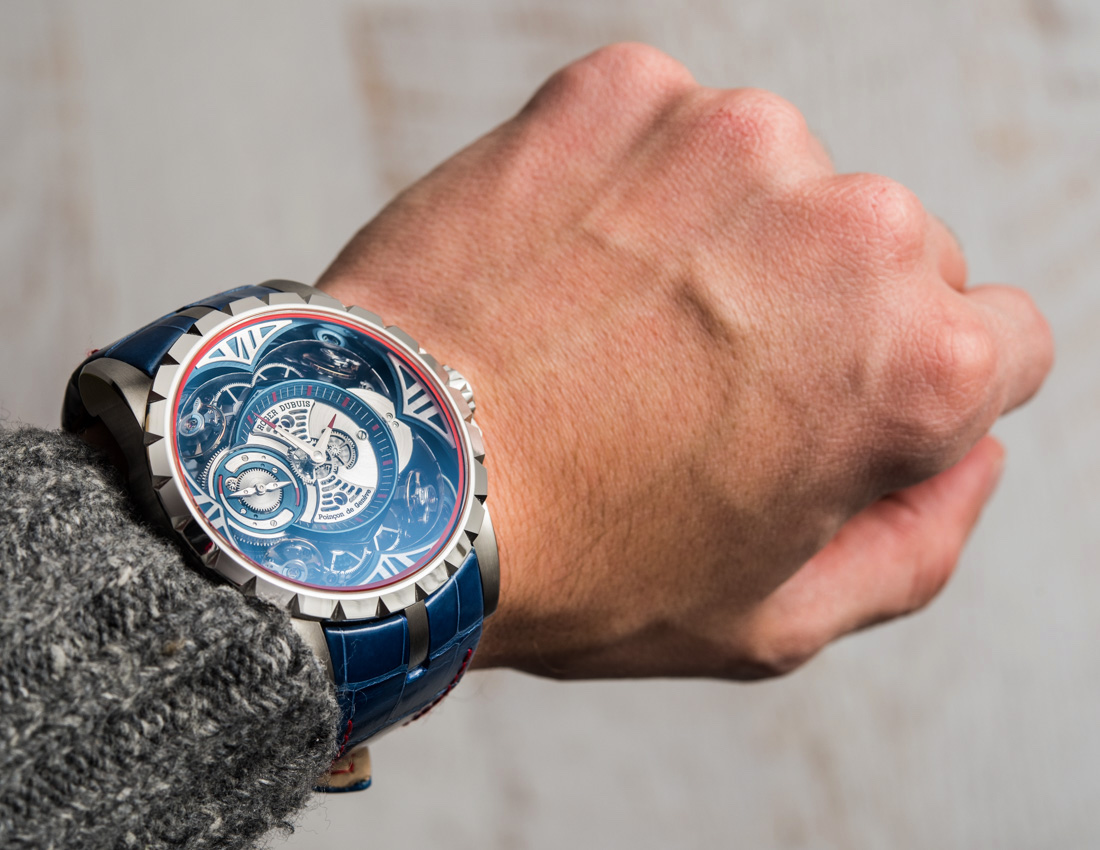 This is really Roger Dubuis Old Watches doing what they do best – creating intricately sporty horological wonders that experiment with new materials. It’s a luxury based on theatrical design and material innovation. It’s also a watch that most of us will never get to call our own, since they are only making 8 of them at a price of 390,000 CHF. rogerdubuis.com