For Roger Dubuis , the double tourbillon is an almost ordinary complication and the Roger Dubuis Excalibur Spider Double Flying Tourbillon is, among all of the models ever crafted by the manufacturer, one of those special ones that have contributed to dramatically change the image of the brand from Geneva. The small manufacturer has slowly but surely become a workshop where high-end skeletonized sports watches with a superb mechanic complication and a deliberately excessive and dramatically flamboyant style are designed and crafted. 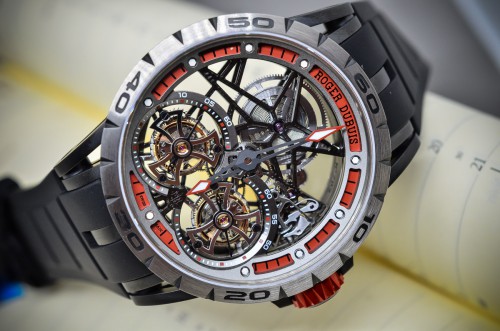 The combination between the big titanium – made case measuring 47mm and covered with a DLC coating – the bezel excluded – the aluminum – made red ring on the internal flange and the skeletonized dial, make this timepiece a unique item and perfectly summarize the concept of lightness and a superb complication. At first sight, this is definitely not an easy-to-interpret skeleton, the dial has been skeletonized to the max and the upper part is a micro Trellis frame that probably takes inspiration from the world of motorcycling. The lower part is dominated by the double tourbillon that is hosted inside a Celtic cross – shaped cage which, according to Roger Dubuis ’s claim, has been crafted in 1,200 hours , 360 of which are solely needed to obtain the “ Seal of Geneva ” certification, a characteristic that is featured across the entire production of the Geneva-based manufacturer. 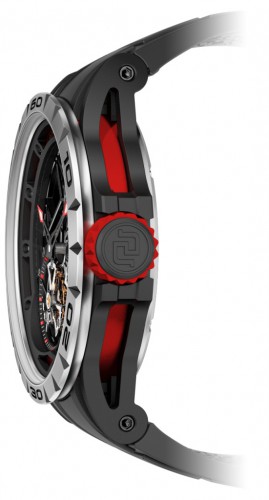 The seal is engraved at 6 o’clock, between the cases of the two tourbillons. It might look like a trivial complicated watch, something that has been released only to impress but it is actually a true example of the best traditional manufacturing. Not every supercomplicated timepiece can boast the prestigious “ Seal of Geneva ” and this brand has been specifically created to release watches that have been awarded this particular certification. The RD01SQ caliber of the Roger Dubuis Excalibur Spider Double Flying Tourbillon is equipped with a differential system, I wish I had some more details about it, that could average the different precision range of the two tourbillons. 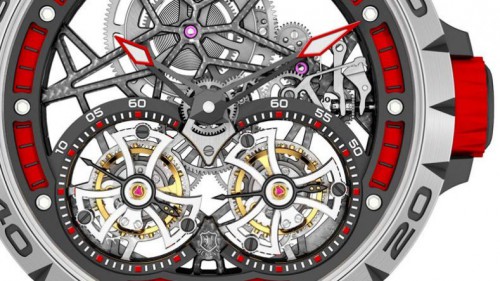 When you wear it around your wrist, the Roger Dubuis Excalibur Spider Double Flying Tourbillon is the perfect supercomplicated timepiece that would suit an eclectic rich person who doesn’t like going unnoticed, someone who can easily understand the difference between two complicated timepieces that sport, at first sight, the very same complication. In that particular tourbillon watches bracket, variations are simply countless.

The transparency of the dial enhances the feeling of lightness of this watch, something that is actually extremely tangible, the most interesting thing, however, is the fact that there are not too many brands around that offer tourbillon watches with a titanium – made case. This particular kind of timepiece is usually crafted using precious metals and the use of a different type of metal is yet another example of Roger Dubuis ’s vision.