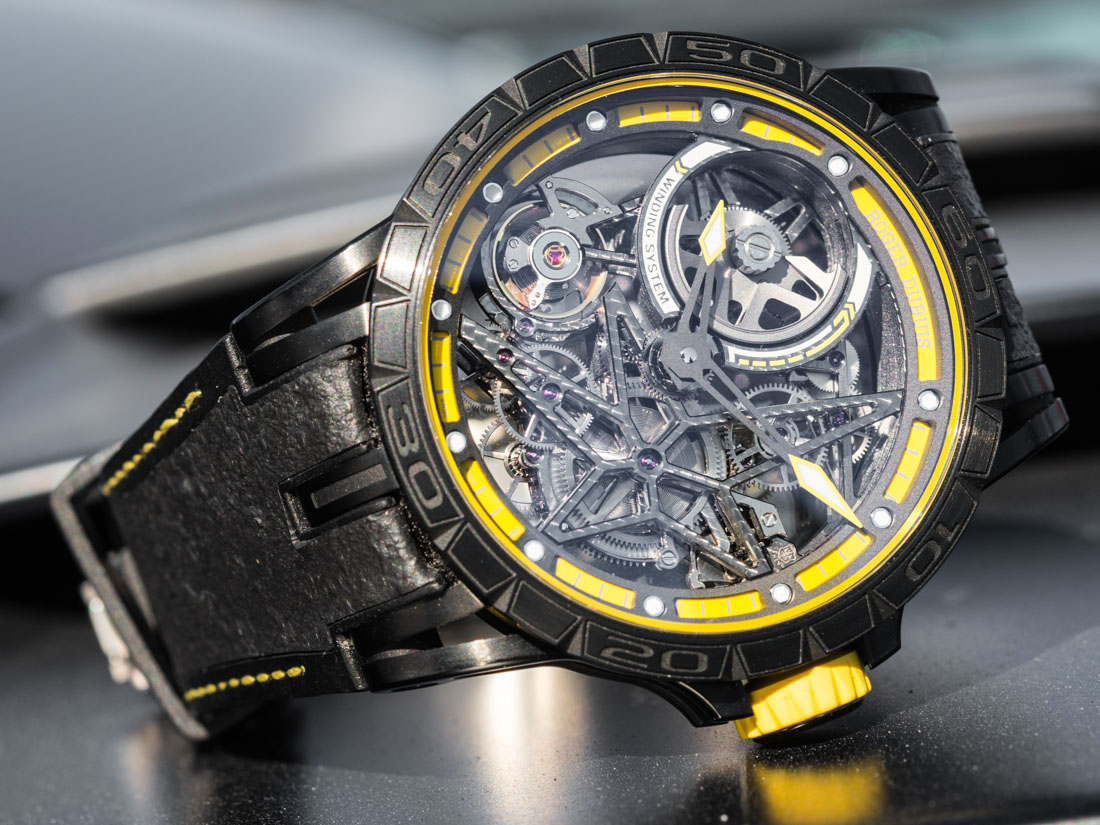 Roger Dubuis’ new partnership with the Italian tire manufacturer Pirelli finds expression in the limited-edition Roger Dubuis Excalibur Spider Pirelli Automatic Skeleton watch which comes in three sporty colors to match new Pirelli Color Edition tires. While less obvious than a car maker or racing team, the Pirelli collaboration is effective for the ultra luxury sport watch maker by suggesting the high-tech, machismo-driven world of motor racing. But, if that is too subtle for you, the straps are also made with the rubber of tires that were actually used to win F1 races.

Don’t get me wrong, this new Roger Dubuis-Pirelli collab won’t make anyone who isn’t already a petrolhead suddenly long for the smell of burned Pirellis. Rather, like any decidedly niche product, it was set up for a specific target audience, the one that frequents race tracks more than it does fashion weeks or art auctions. Still, even if you like cars very much, you do have to attend (or, better still, participate in) race events and Cars & Coffee gatherings often to imagine how the Roger Dubuis Excalibur Spider Pirelli Automatic Skeleton fits into that world. 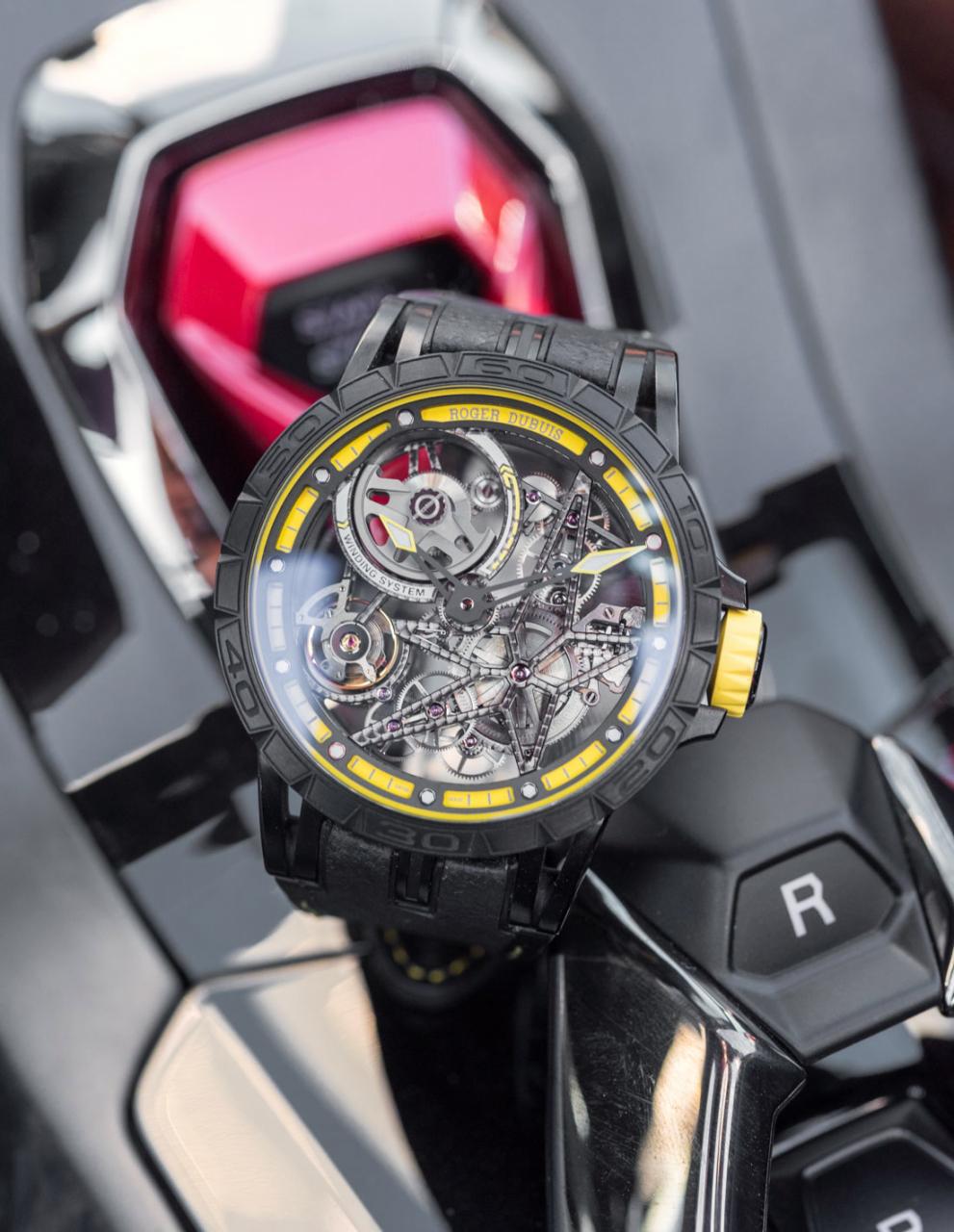 Near racing cars, where everything is high-tech, mechanical, noisy and colorful is where you’ll see one of the biggest concentrations in “loud,” high-tech and, yes, often very expensive watches. Produced in just 88 pieces in each of the three colorways (yellow, red, and blue) that Pirelli uses on its Formula-1 tires, there will only be a very limited number of these pieces made and I can still appreciate how far Roger Dubuis Sports Activity Watch has gone to alter the overall looks and finer details of the Excaliber Spider to match this high octane lifestyle. 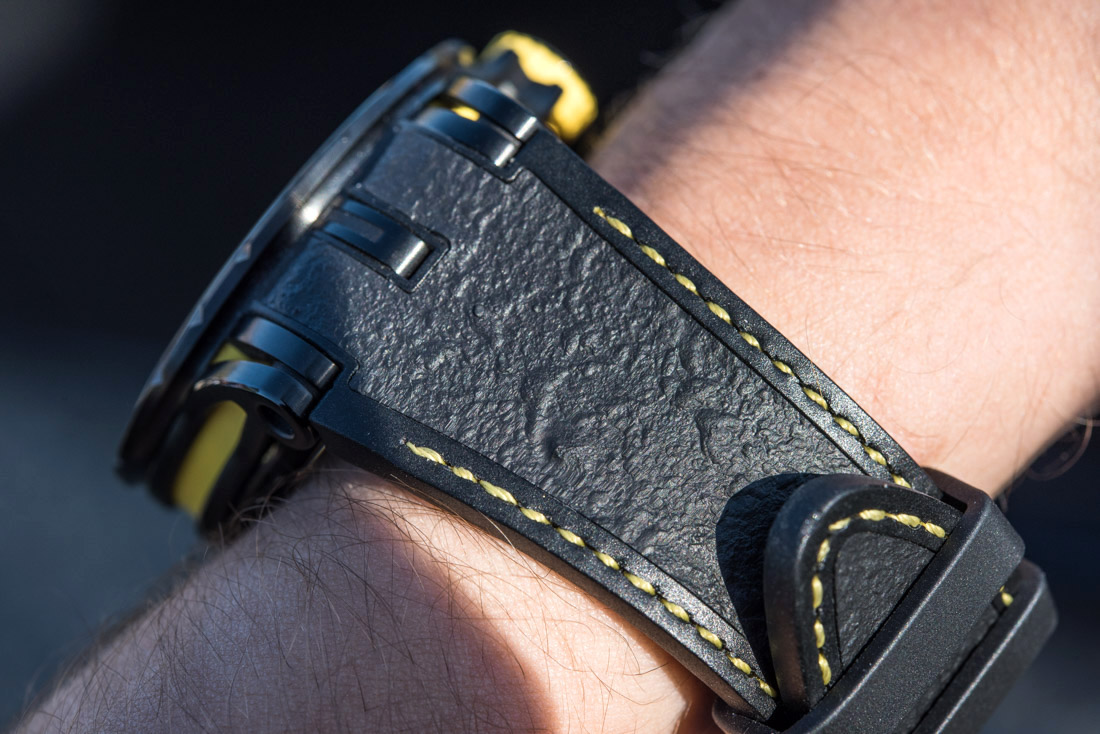 Just look at the Pirelli rubber-inlaid strap: it definitely is a strong contender for the title of (by traditional standards at least) ugliest watch strap in watch strap history. Propose a watch purist the idea of putting a semi-melted-looking, random structured rubber strap on their beloved, nurtured, possibly gold and also quite petite timepiece, and they’ll freak out. 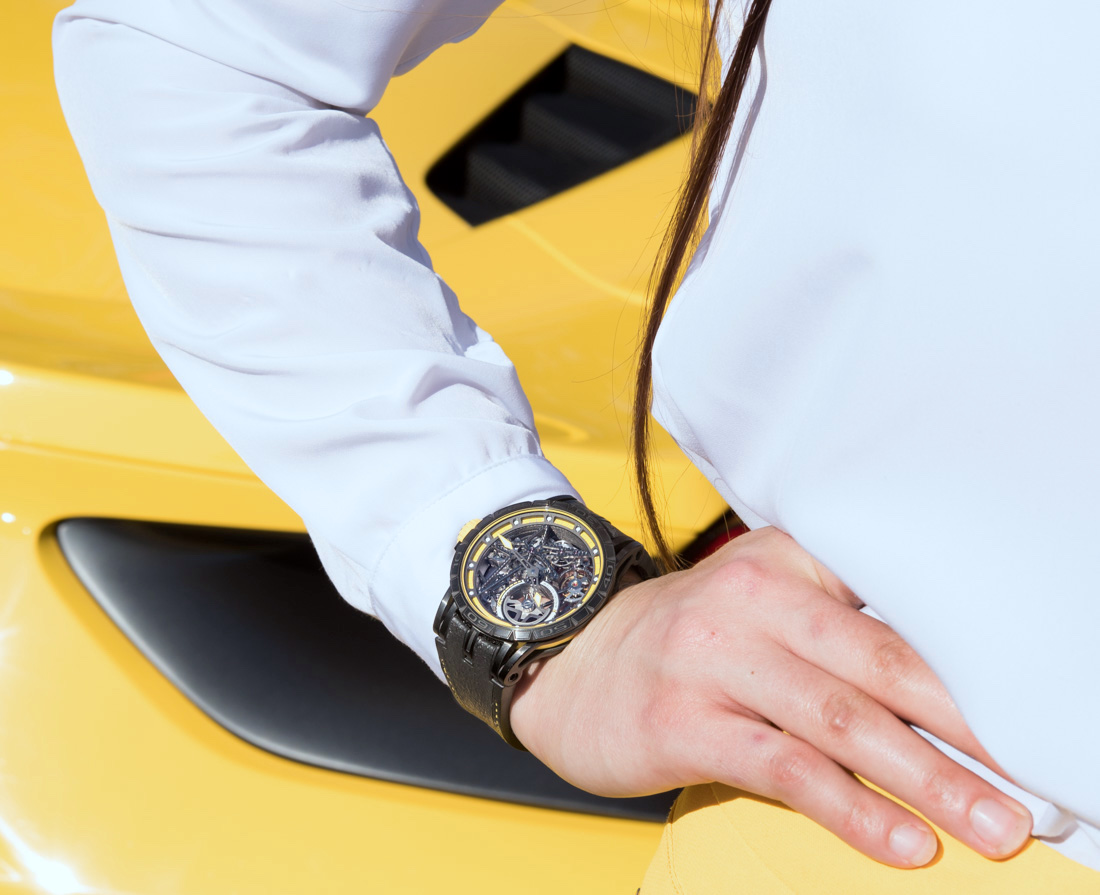 And yet, it’s a perfect match for those 200-odd people who this watch is very much for: those who love the looks and smell of near-melted Pirelli slicks on race cars parked right after some hot laps, and who often see (or own) stupid-expensive, mega rare race cars all beaten up by rubber debris and dirt after a race. 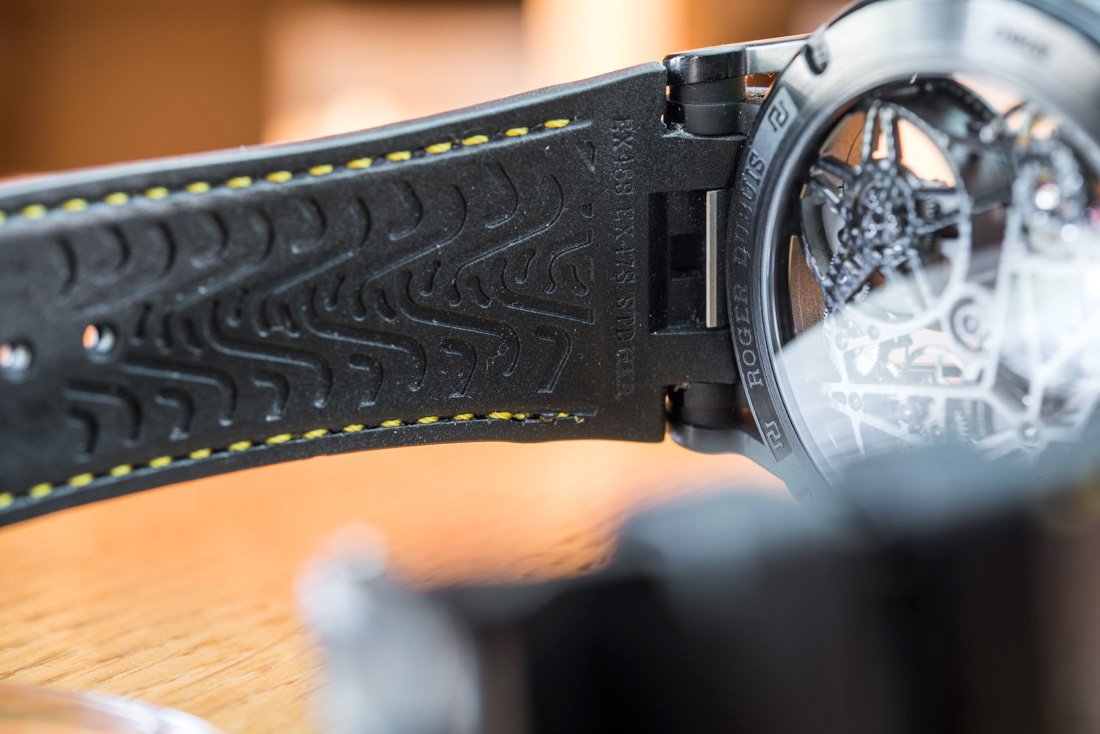 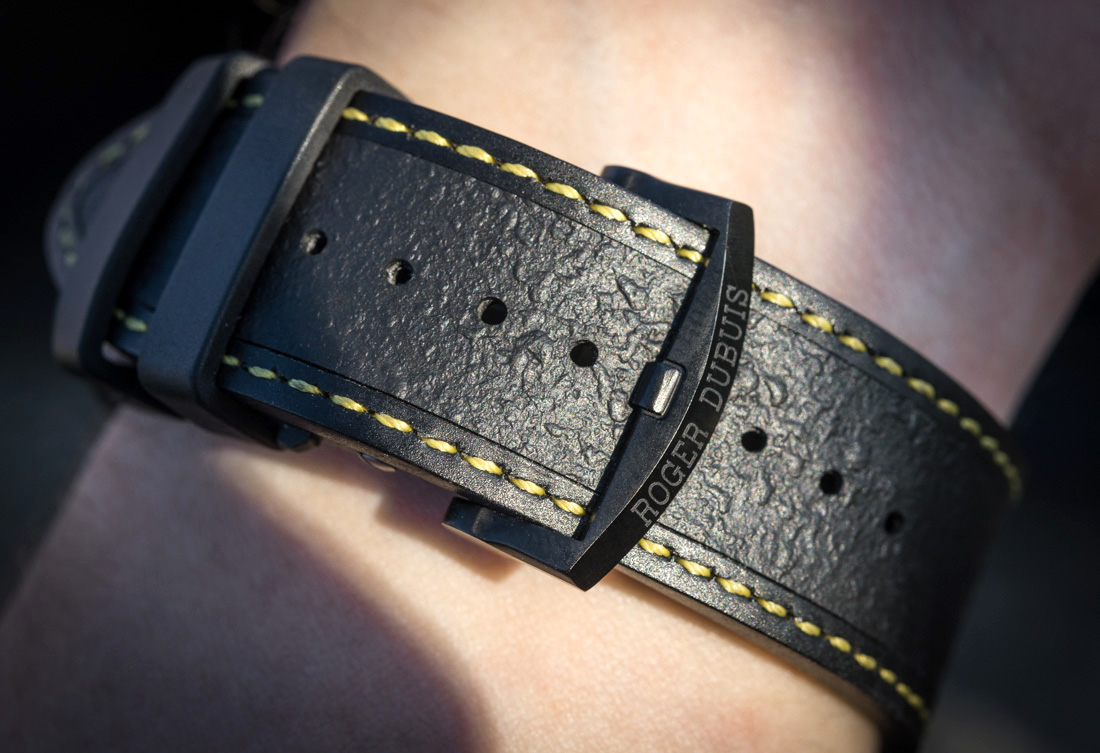 Speaking about the strap: the lower part that touches the skin is crafted from the sort of comfortable, durable and anti-allergenic rubber that is used on most high-end watch straps, plus it is adorned by a pattern taken from the intermediate version of Pirelli’s F1 tires. By contrast, the upper inlay features rubber that is taken straight from Pirelli tires taken off of Formula-1 Grand Prix winning cars: this is a different take on the “DNA” approach, where a fancy or (for some at least) interesting material is melted into the case or some other part of the watch. 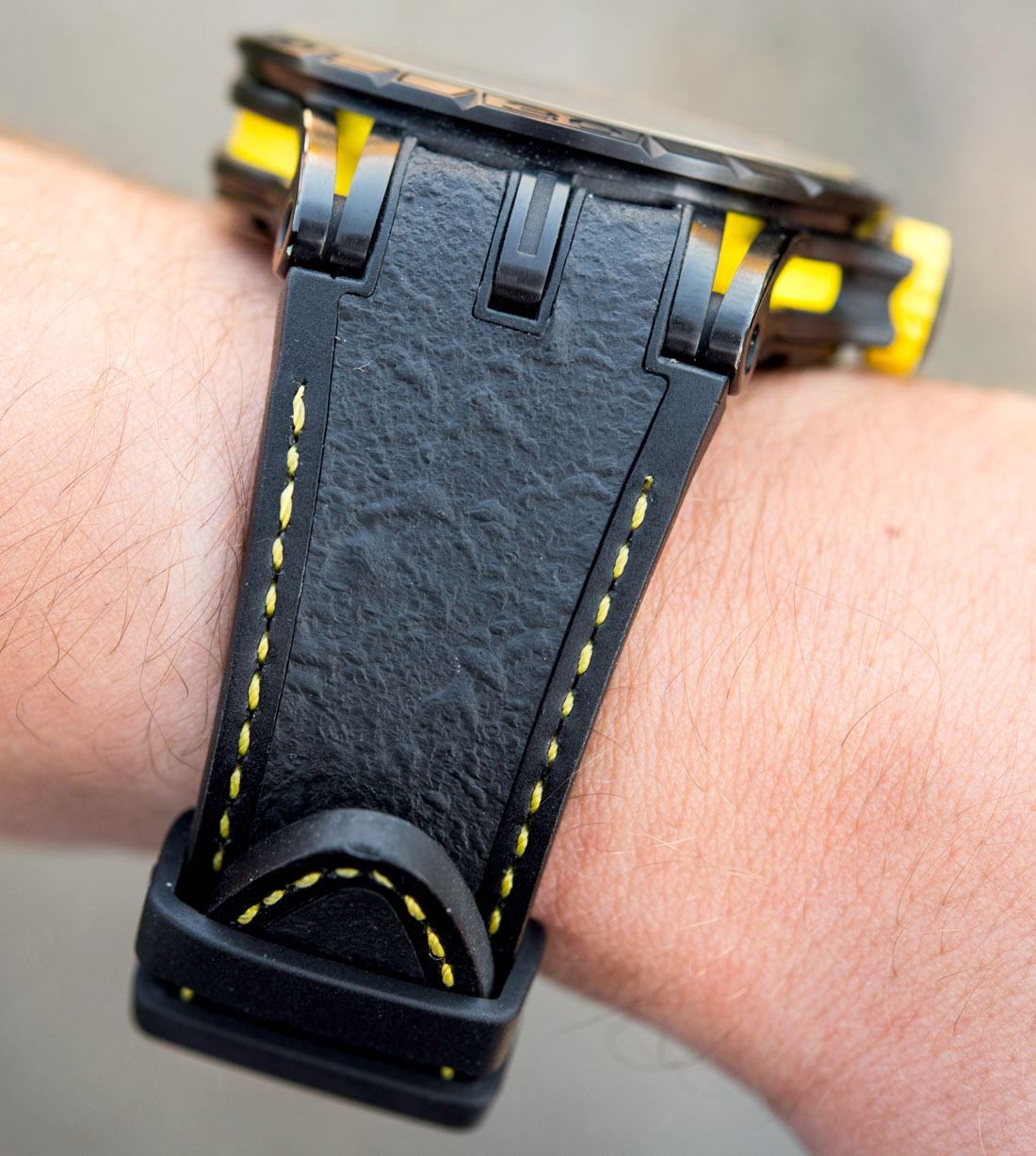 Here, the namesake element of the watch is right on display and tactile to help you tell about it by pointing right at it when passing through a busy pit lane, where everyone knows everyone… and where, as I said above, most all the drivers, engineers, and team owners love and wear some sort of a rare, high-tech watch. I can’t speak for Roger Dubuis Geneve Watch Price here, but I strongly believe this is the crowd they are (or at least should be) after with the Roger Dubuis Excalibur Spider Pirelli Automatic Skeleton. 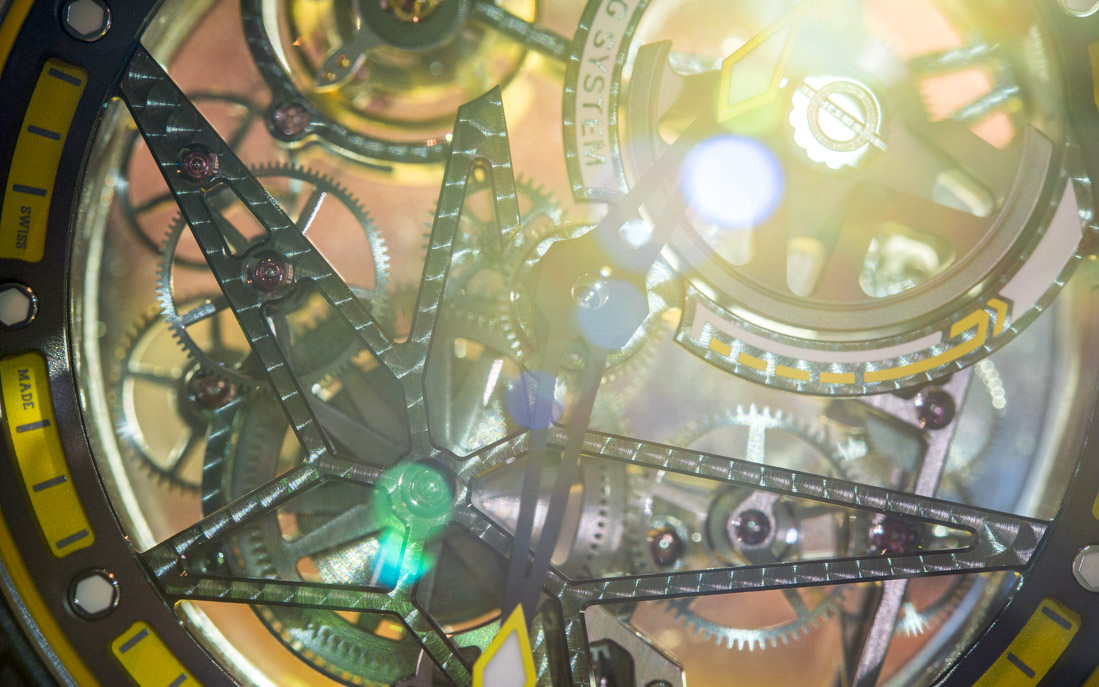 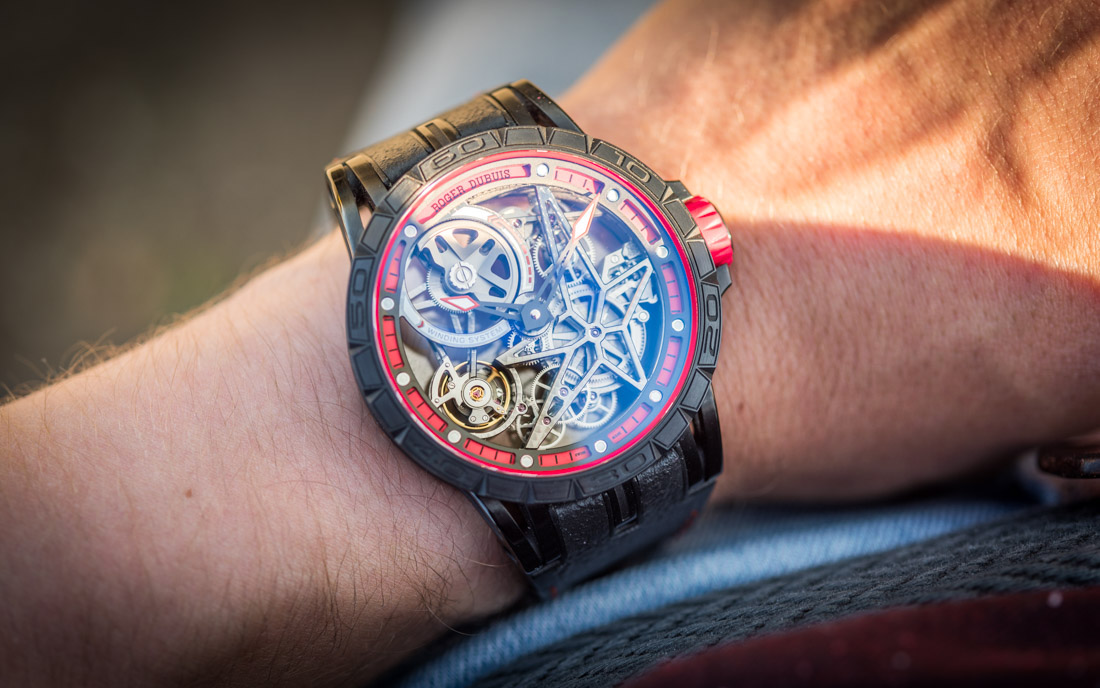 Many Roger Dubuis Watches & Wonders watches in the brash, sporty style of the skeletonized Excalibur Spider incorporate a tourbillon or two and run well into six figures. With the Roger Dubuis Excalibur Spider Automatic Skeleton introduced we see a version meant to offer the core experience and style that Roger Dubuis has made their signature, but without a tourbillon and its associated, hefty price premium. Of course, we are still talking high-five figures, instead of six – but it’s still a big difference. It doesn’t cost as much as a race car’s chassis, just as much as a weekend of testing with the team. 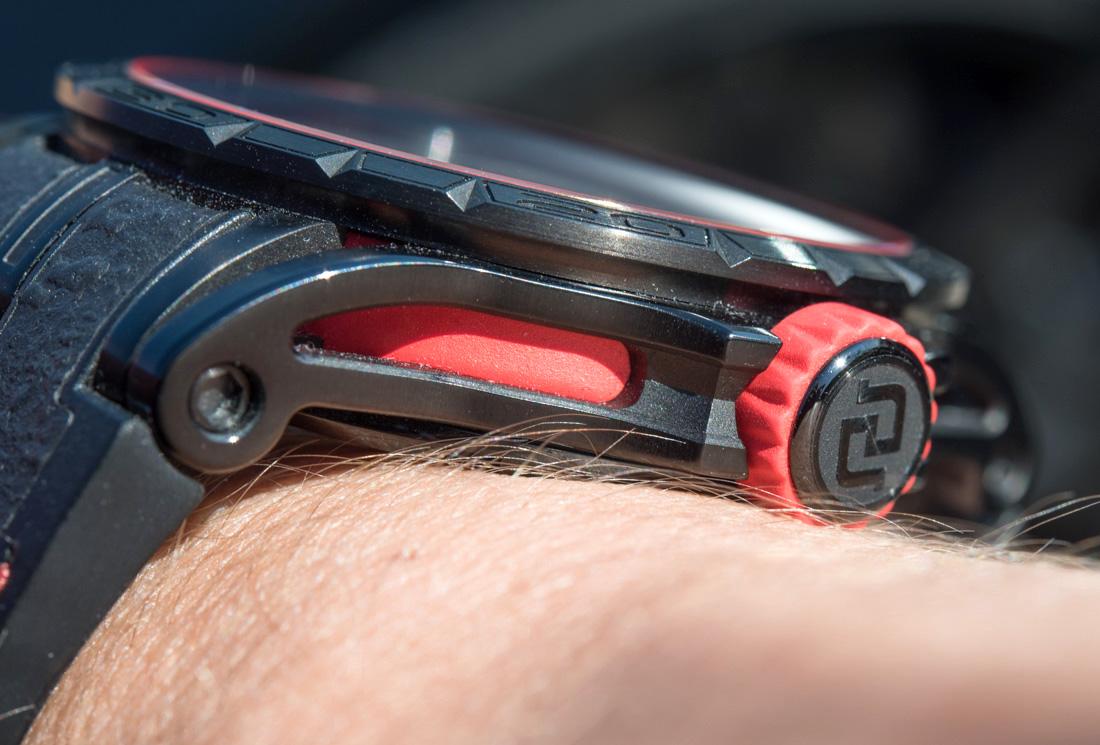 Typically big and bold, the black DLC-coated titanium cases are 45mm-wide and 14mm-thick and are water resistant to 50m. Are Roger Dubuis Watches Good is all about offering ‘look-at-me’ wrist presence through design as well as size, but for wrists that can accommodate the large case, titanium helps make the Roger Dubuis Excalibur Spider Pirelli Automatic Skeleton light and comfortable. There are 42mm Excalibur Spider watches available in various materials and iterations, but not for the Pirelli editions. 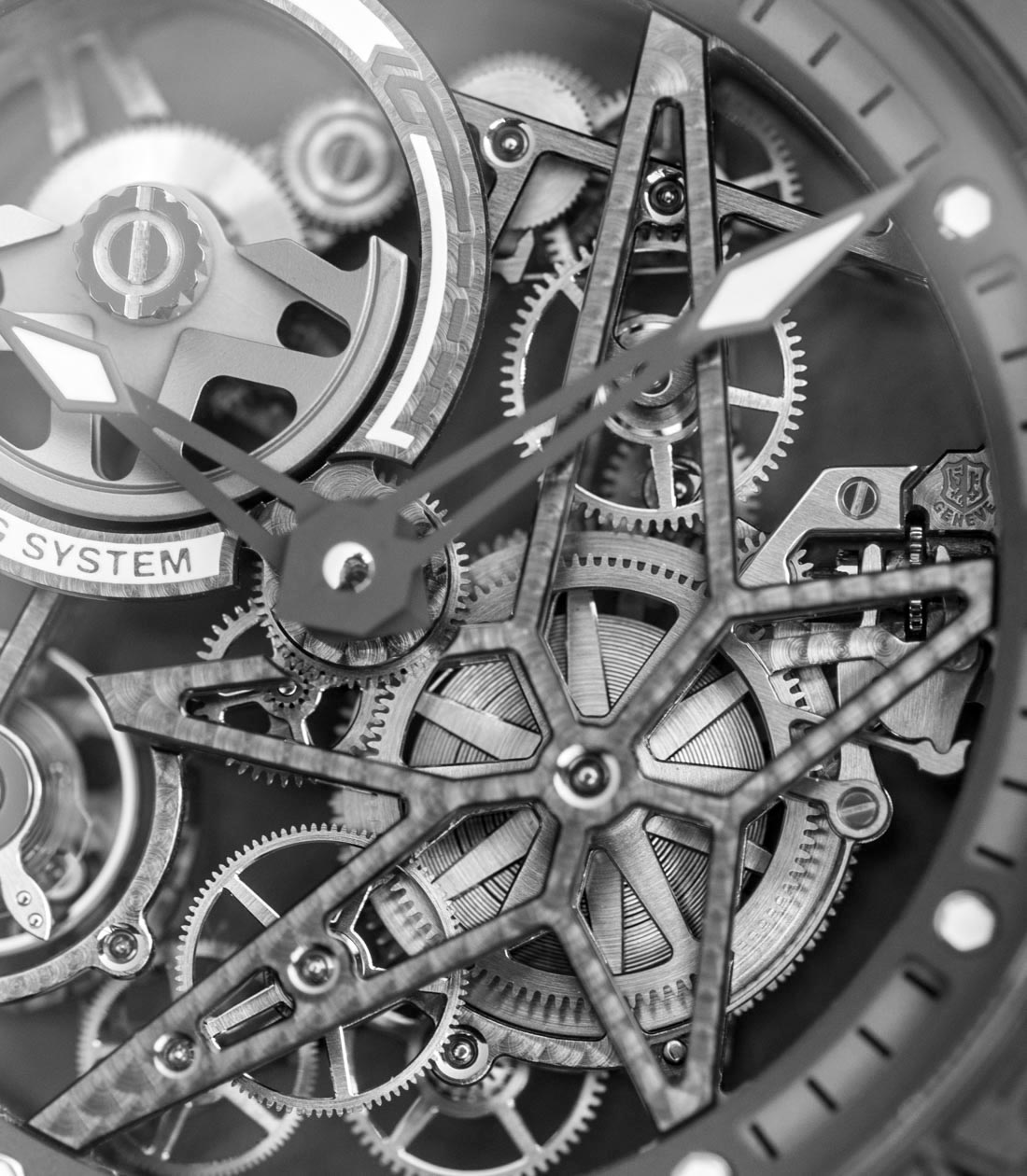 The Roger Dubuis RD820SQ caliber is just as bonkers here as it is in other Excalibur pieces. It really is a basic three-hand caliber re-imagined – I don’t think I could ever get bored of the massive star bridge that secures most of the going train and the accelerator wheels that connect the micro-rotor with the mainspring. Like all watches from the brand, the Roger Dubuis Excalibur Spider Pirelli Automatic Skeleton also boasts the Geneva Seal, so you get the hand-applied perlage, anglage and… prestige.

Roger Dubuis say the RD820SQ takes 530 hours to make with some 170 hours dedicated to the Geneva Seal (that’s a full week with every hour spent on meeting those requirements). With the updated criteria for the Seal, since 2013, water resistance, power reserve, and accuracy are tested as well, which has been long overdue. 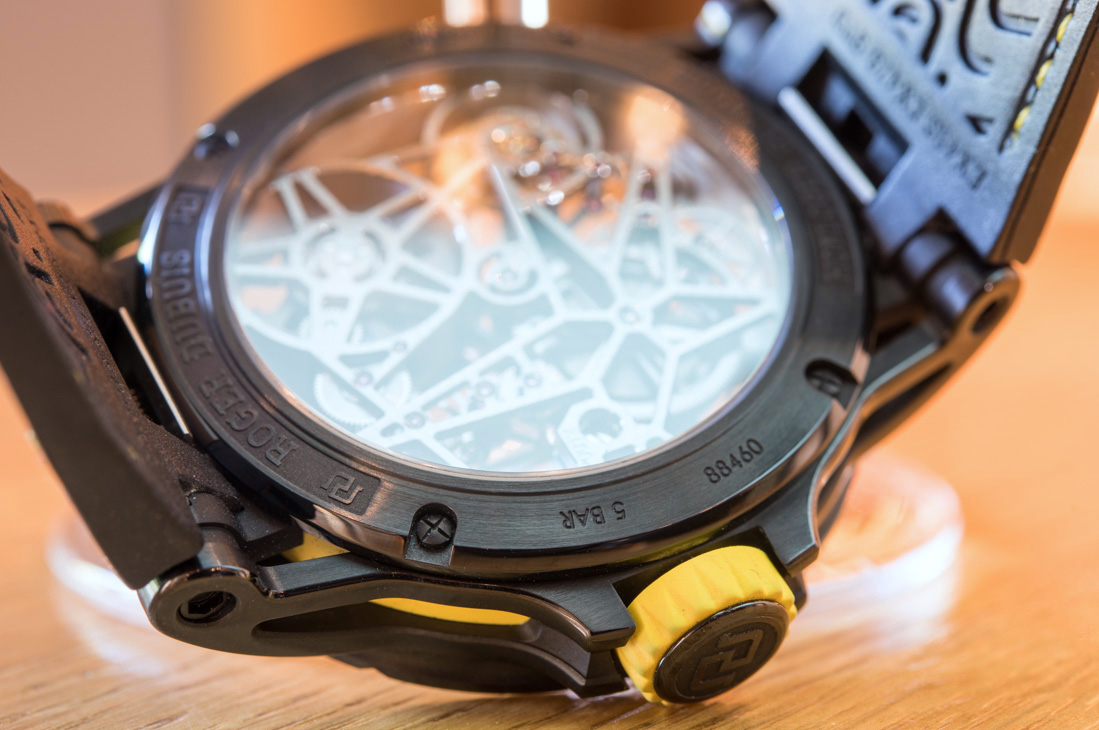 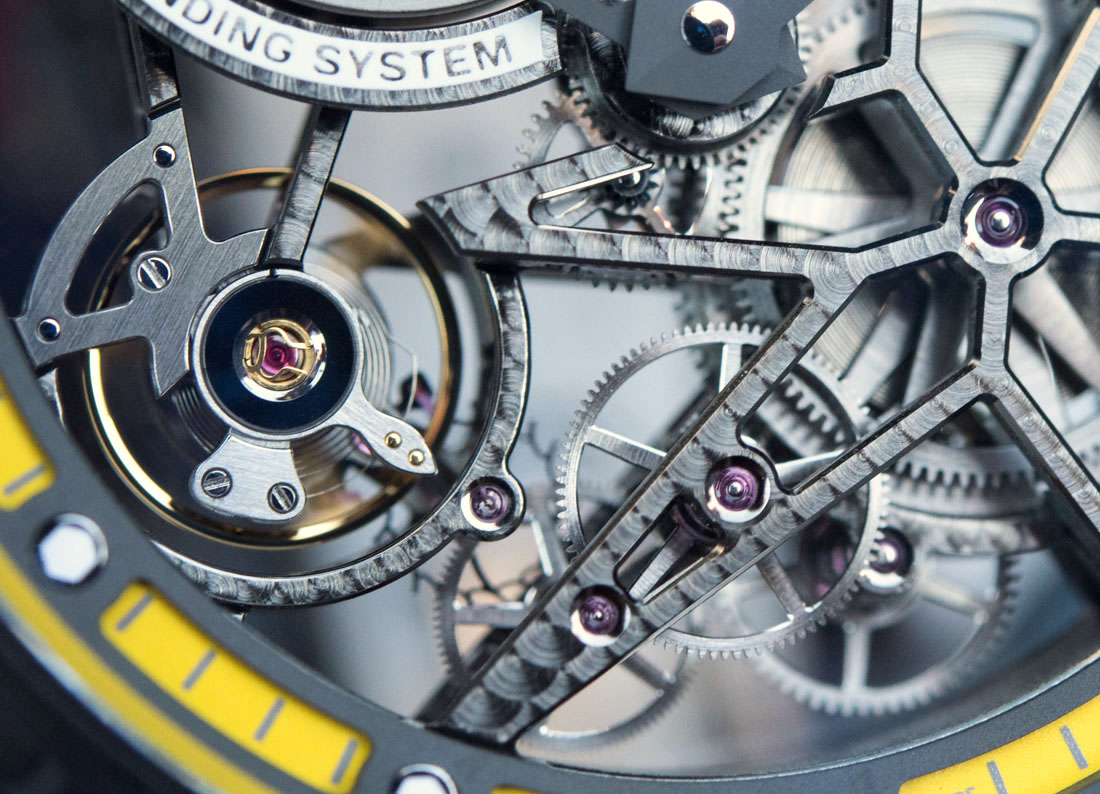 The Roger Dubuis Replica Watches Sale Excalibur Aventador S is the first watch devoted for this new partnership, coming in two variations, available in limited runs of 88 and 8 pieces, respectively. For some reason they are both called precisely the same — Excalibur Aventador S — although differences in their usage of substances for both the instance and movement imply they are not two colour variations of the same thing.The movement architecture is the frequent theme between the two Excalibur Aventador S watches: called the Duotor, avid enthusiasts of Roger Dubuis and/or ultra high-end watchmaking will recognize both by the images and the title how this really is a twist on the absolutely insane and equally famous quadruple-balance wheel Quatuor (hands-on here). The Roger Dubuis Duotor movement is a nerd-fest designed to coordinate with the awe-inspiring sophistication of a Lamborghini engine, no less. Two balance wheels have been set up at a 90° angle — mimicking the V-layout of those cylinders in an auto engine. The equilibrium wheels are independently tuned so you runs faster and the other slower compared to an ideal 0 seconds daily rate and are attached using a differential (like the rear wheels of a vehicle) in order that their prices are averaged out.ance wheels.The nerd-fest is far from over: the differential is followed by a remontoir d’egalité, which is a first for Roger Dubuis and is responsible for creating the jumping advancement of the central seconds hand. I have had the chance to once again catch up with Gregory Bruttin, product strategy manager and, even more importantly from our perspective, the principal engineer behind Roger Dubuis’ most unusual creations — including the Quatuor, of course.

The movement is made to be viewed, and virtually all 167 parts comprising it can be seen from both the front and back as it ticks along at 4Hz, with the single barrel visible at the center of the star-shaped bridges, offering a power reserve of 60 hours. This base caliber (by Roger Dubuis Watches Wikipedia standards) remains a strong one for the brand, as it proves its versatile looks from medieval themed watches to ones linked to motor sports – not many movements that put so much on display can do that. 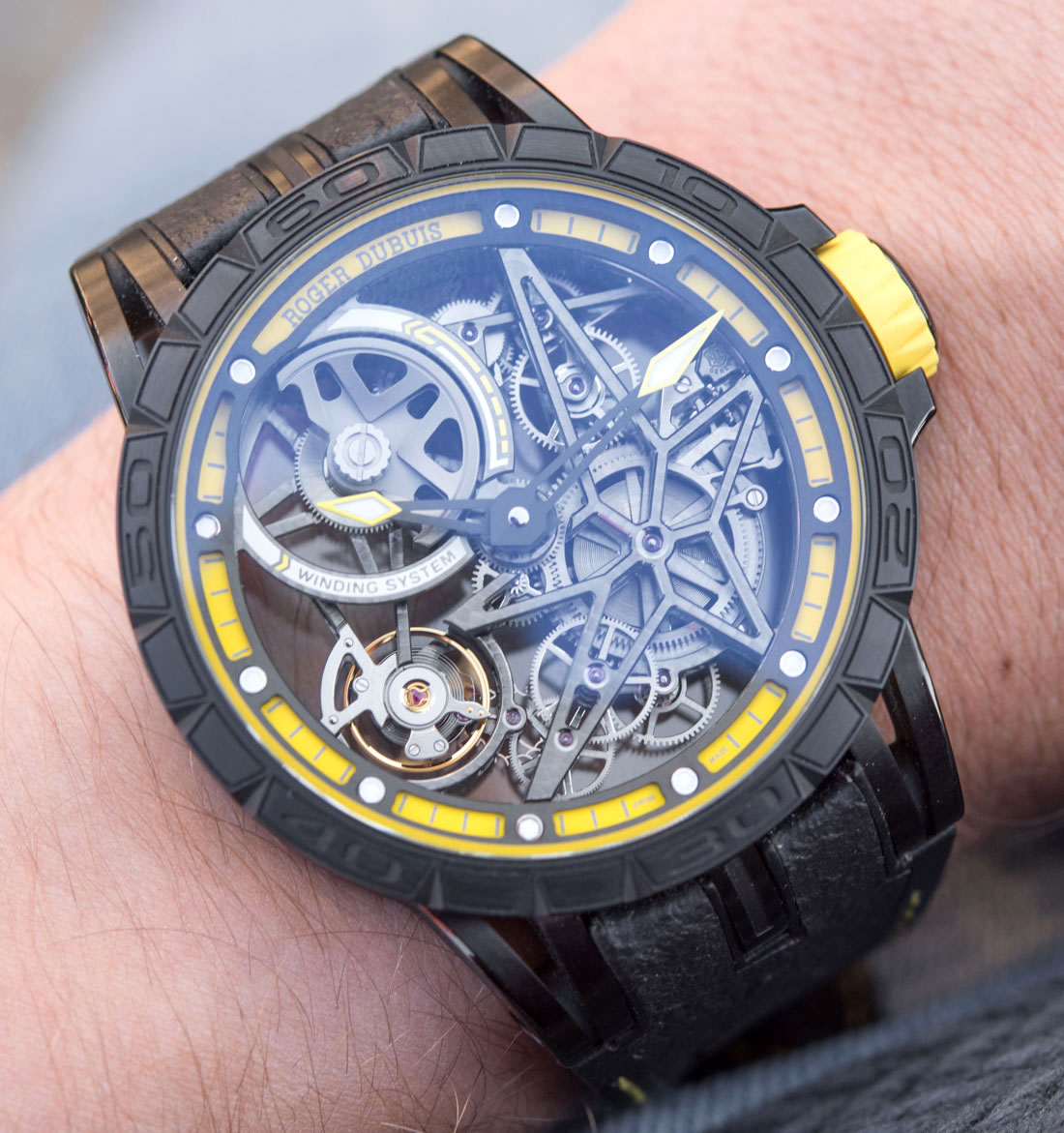 On the wrist, the lightweight titanium case, the airy movement and the supple rubber strap make the Roger Dubuis Excalibur Spider Pirelli Automatic Skeleton wear very comfortably, right out of the box. Legibility could be better, as the domed crystal frequently shows a blue-ish hue at some or all of its surface. Painting the hands in their entire lengths to the vibrant color of the watch would also make the hands stand out a bit more – when the countdown to the race is about to end, you’d better be able to tell quickly and accurately what the minute hand shows. 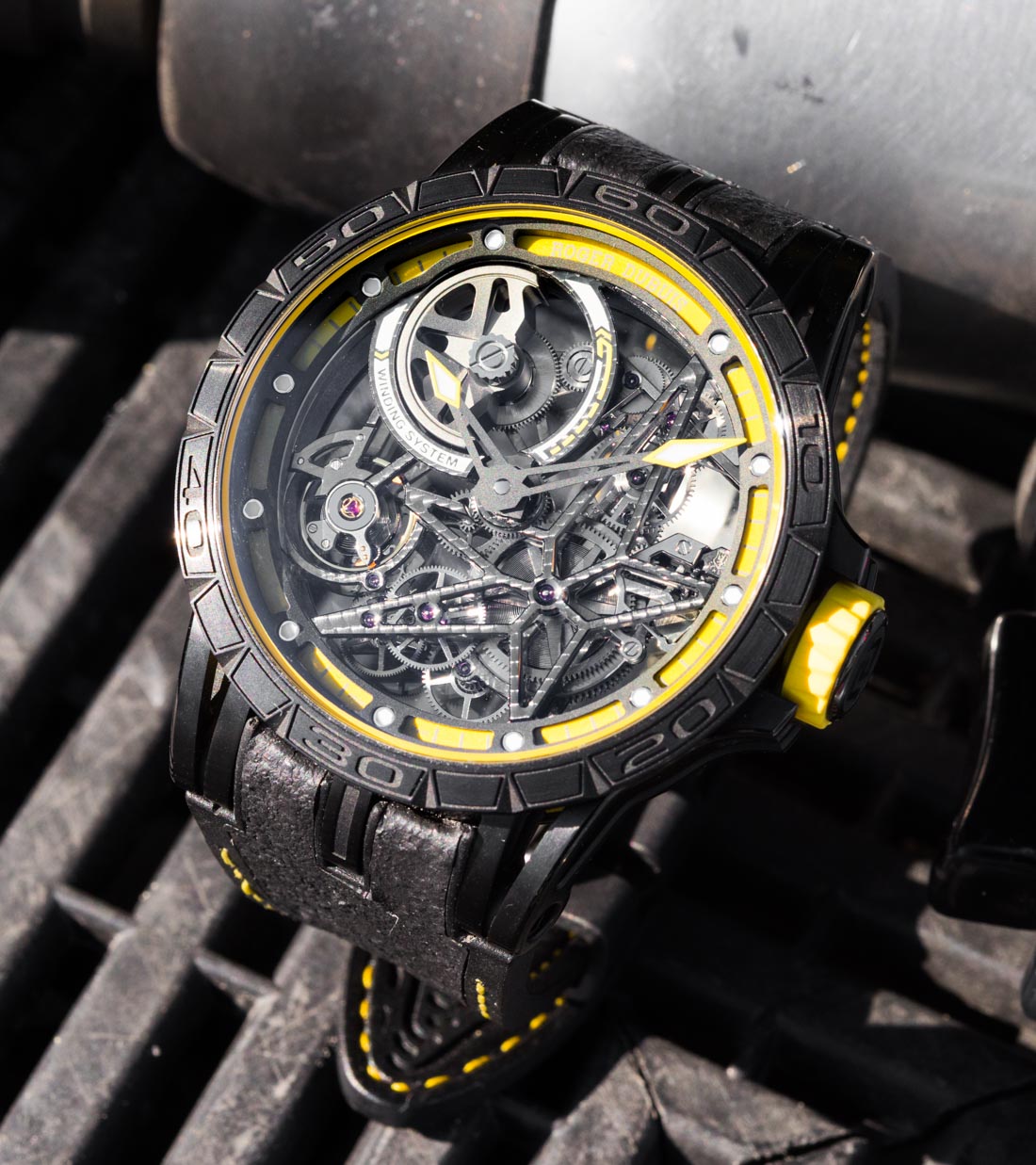 In summary, Roger Dubuis Watches Sale made a bold move by going for this niche that had been very clearly unused by luxury watch brands and teamed up with a renowned tire manufacturer – we need not tell them that it is not a glamorous association, they sure knew that when shaking hands over it… But then again, who ever said everything has to be restrained and discreet and so desperately “luxury” in the world of watches? Being into cars and racing like I am, and having had a whiff of that noisy atmosphere too, I can totally see this watch working brilliantly in that environment and for that audience. For having the understanding of their scalability and flexible design language, and using all that to go after a crowd with such a purpose-designed piece, they deserve some kudos. 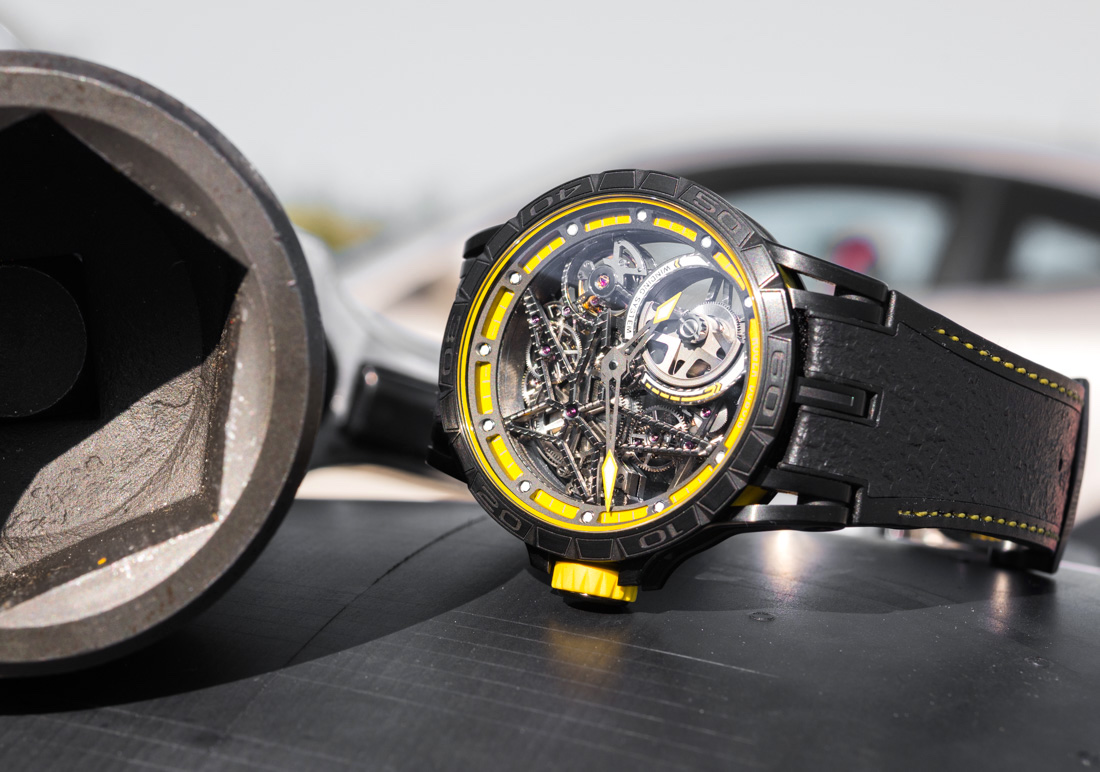 The question is, does doing so make one bit of (negative) difference for Roger Dubuis? I mean, they put twelve knights and four balance wheels on the dials of their watches, so they can do whatever they want.

The Roger Dubuis Excalibur Spider Pirelli Automatic Skeleton watches are limited to 88 pieces in each color for a price of $66,500. rogerdubuis.com