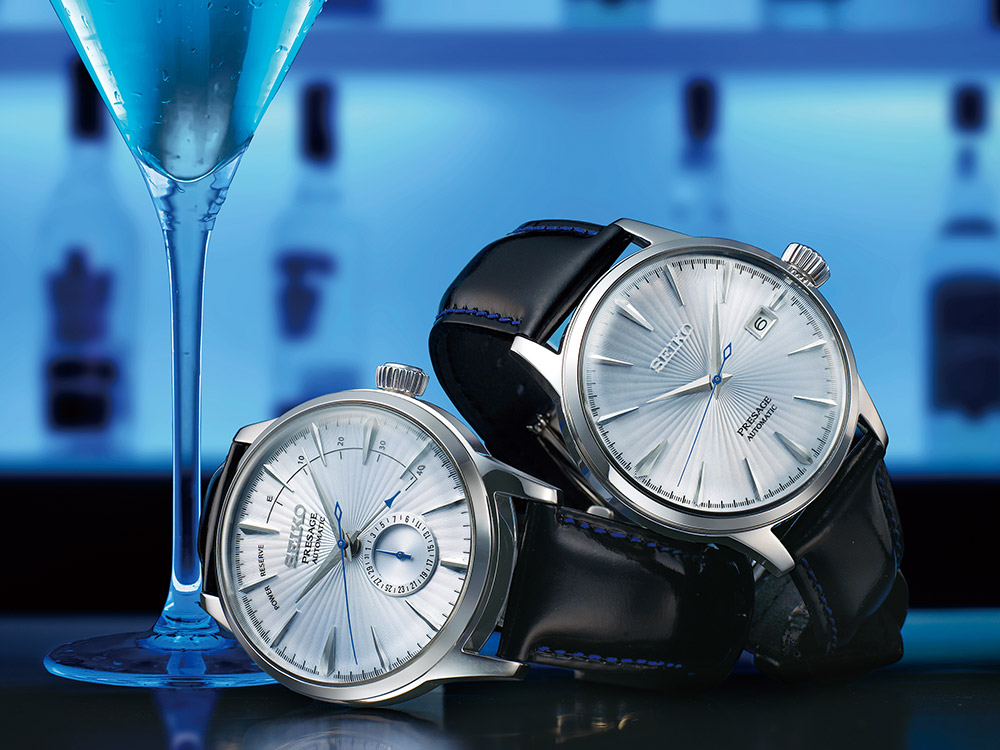 For Seiko fans, the Seiko SARB065 “Cocktail Time” watch, released a few years ago and sold only in Japan, is something of a legend. If you were looking for a dressy watch that wouldn’t leave a big hole in your wallet, it would certainly be easy to recommend. Recognizing the popularity of this watch, Seiko has decided to come up with no fewer than eight new Seiko Presage SSA & SRPB “Cocktail Time” watch models that closely mirror the older SARB065 with its deeply sunburst-textured dial. Only this time, they reside in Seiko’s Presage line.

As many popular Seiko Watches New Orleans models are “nicknamed by the public,” these SARB watches were dubbed “Cocktail Time.” They are dressy but not overly formal, and it is easy to imagine wearing such a watch in a drinks-after-work setting, even without knowing Seiko’s stated inspiration for the designs. Apparently, the designs were based on cocktails created by Japanese bartender/mixologist Ishigaki Shinobu. These new watches share the same origin story, so we feel it is appropriate to also refer to them as the new Seiko Presage “Cocktail Time” watches. 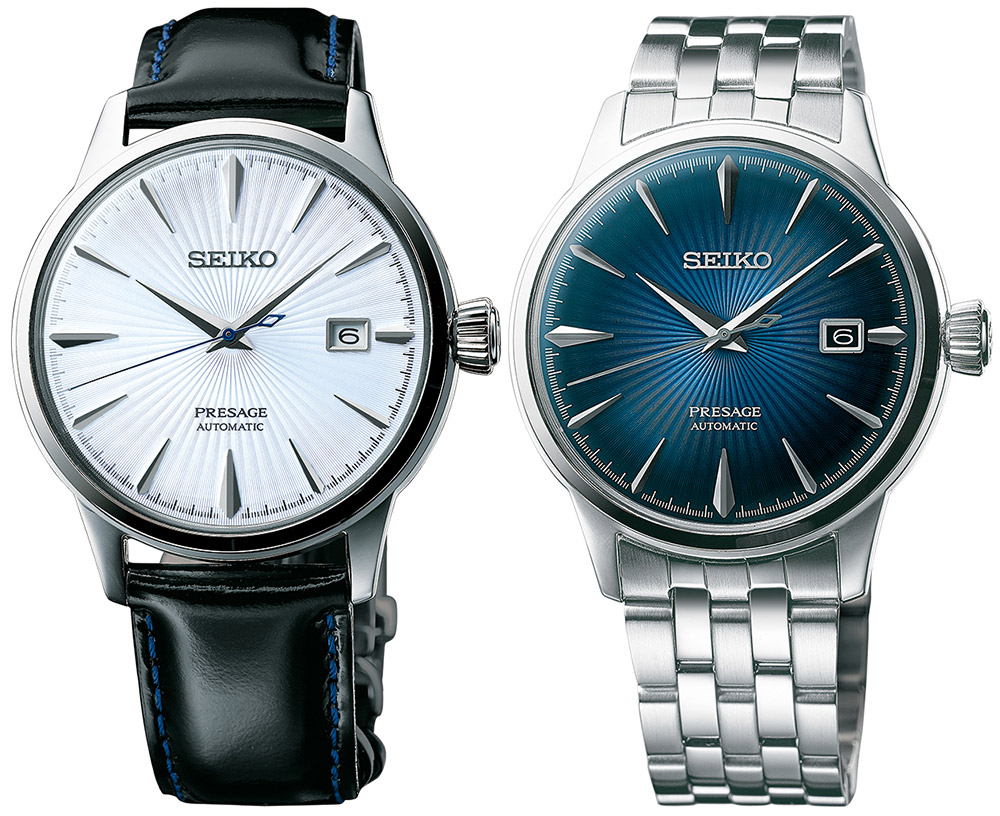 The Presage collection was introduced to the international market in 2016 and seeks to offer affordable Japanese mechanical watchmaking to the rest of the world. So it makes sense for these eight new watches to join the Presage collection. The eight watches will fall broadly into two groups: the SRPB series which consists of simple three-hand watches with a date and the more complex SSA series which is made up of watches with a power reserve and date sub-dial. Let’s take a look at the SRPB series watches first.

There will be four new watches in the SRPB series, and the SRPB43, with its silvery blue sunburst dial, is the one is that is closest to the older SARB065. The case is mostly similar, except for the larger and more substantial crown. The case is made out of stainless steel, but Seiko will offer two variants that come with yellow and rose gold-plated cases. Case diameter is unchanged at 40.5mm, but case thickness has been slightly reduced from over 13mm to 11.8mm. 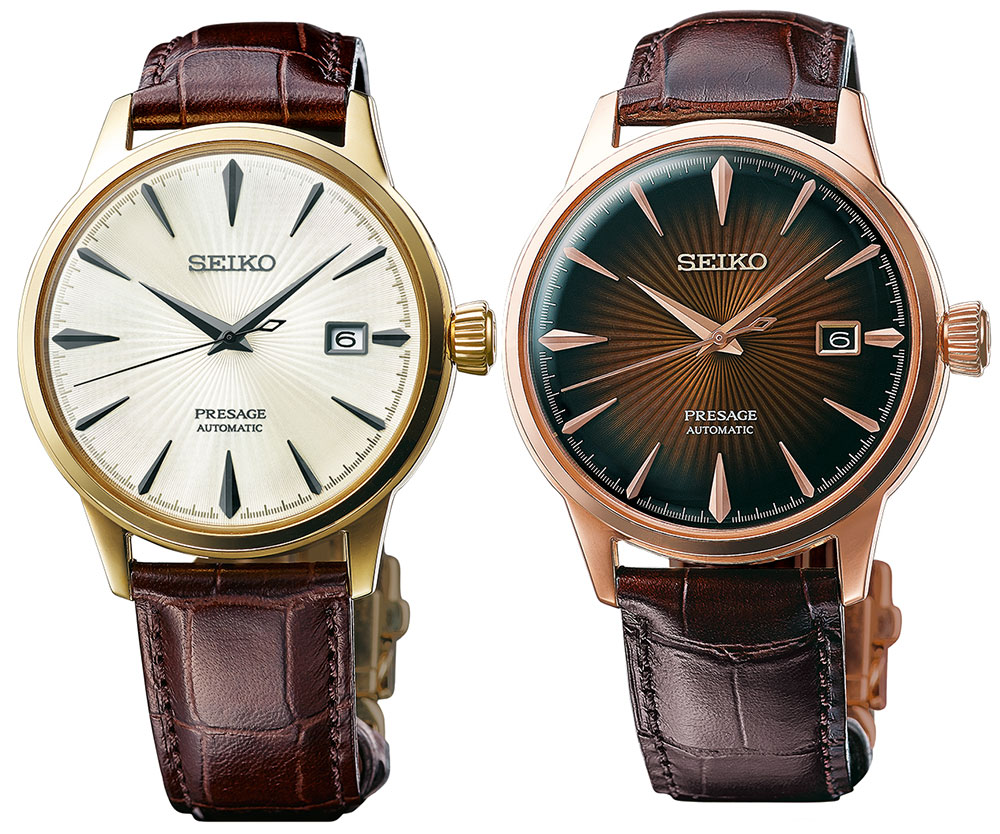 There have also been some tweaks to the dial beneath a “box-shaped” Hardlex crystal. First, the cursive “Automatic” text at 6 o’clock is gone. Now in its place is the Presage wordmark and “Automatic” in a stronger and more formal script. There are also new colors for the dial. Apart from the silvery-blue SRPB43, there are the SRPB41 in dark blue, SRPB44 in a cream dial and yellow gold case, and finally, the SRPB46 which has a brown dial and a rose gold case. The dark blue SRPB41 will be offered with a stainless steel bracelet, while the rest of the watches will come with leather straps.

The movement within is the 4R35, which is actually a bit of a downgrade considering that the SARB065 was equipped with the 6R15. Though both movements have mostly the same specifications – both beat at 3Hz, both hack and hand-wind, and both feature similar finishing – the 6R15 offers a longer power reserve of 50 hours (as opposed to the 41 hours of the 4R35) and is built using better materials. The movement is visible through a Hardlex crystal display case back. 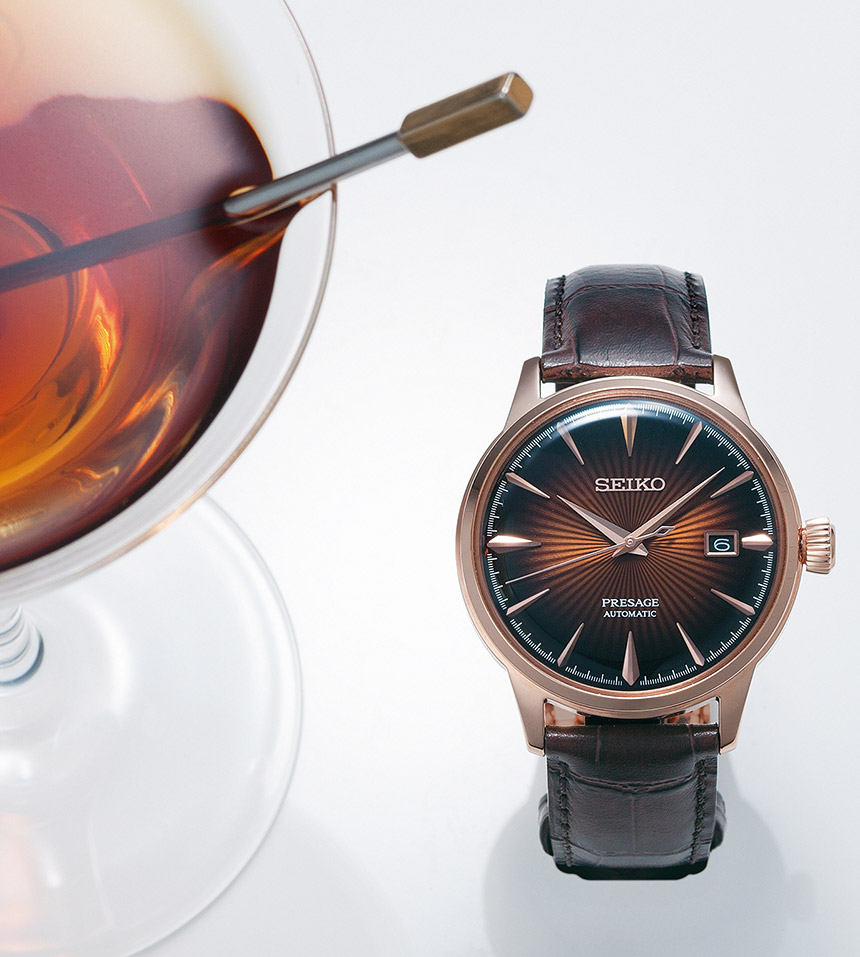 While the Seiko Presage SRPB43 with its silvery-blue dial is likely going to be the most popular model of the foursome, I’m personally most intrigued by the Seiko Presage SRPB46. Its combination of the unusual mocha-colored dial and rose gold case looks interesting and I’m looking forward to seeing the watch in person. 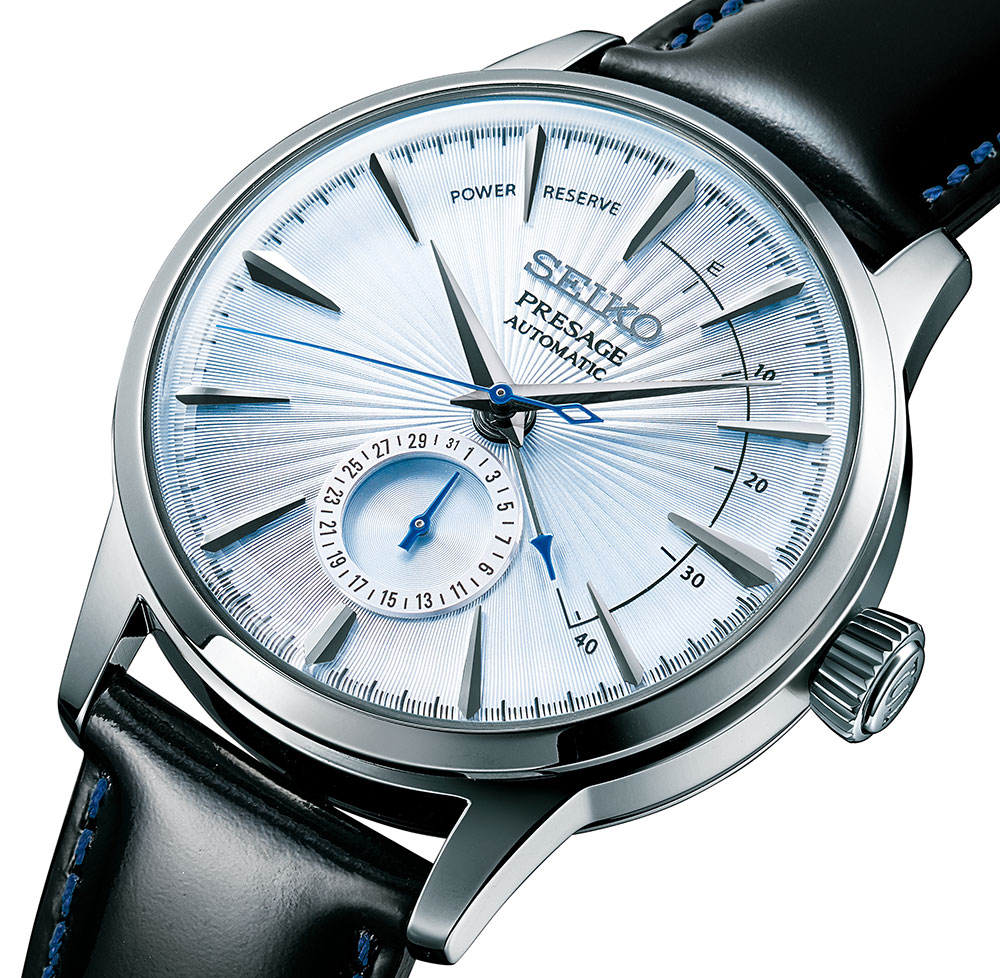 The SSA series will also see the introduction of four new models. Like the SRPB series, these watches will feature a dial that has a sunburst finish. Case diameter is identical at 40.5mm, but the SSA is slightly thicker at 14.5mm because of the added complexity of its movement.

The movement of the SSA series watches is thicker because of its power reserve indicator. The power reserve indicator stretches across the dial from 12 to around 4 o’clock. This puts off the symmetry of the dial a little but, based on the press photos that I’m looking at, it doesn’t seem all that bad unless you are an absolute stickler for symmetry. At 6 o’clock, you have a date sub-dial that adds to the dial’s sense of depth and has a texture that contrasts in a neat way with the rest of the sunburst finish. The hands and hour markers are rendered in the same faceted style as the SRPB series. 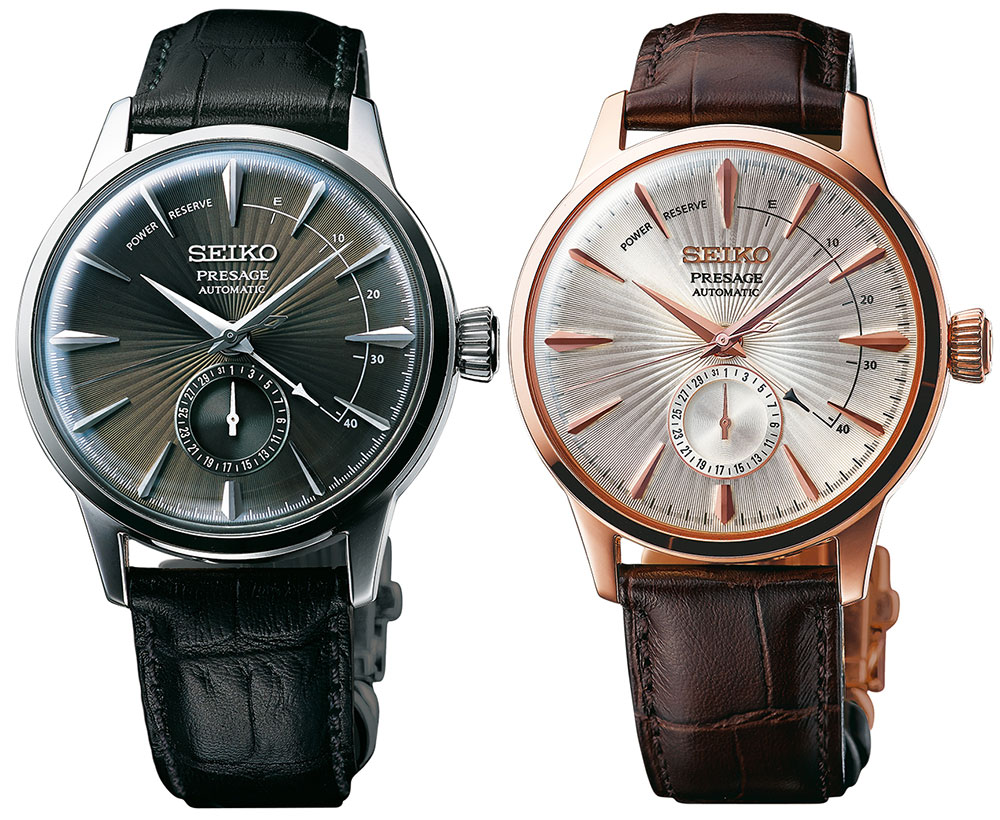 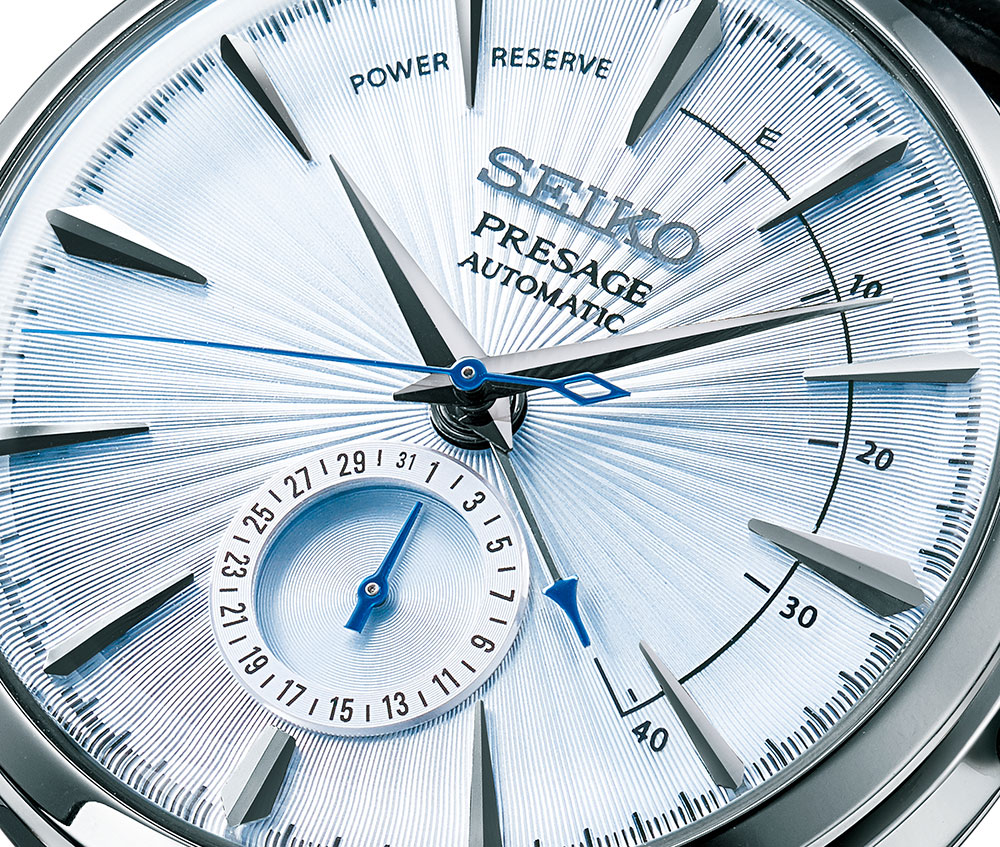 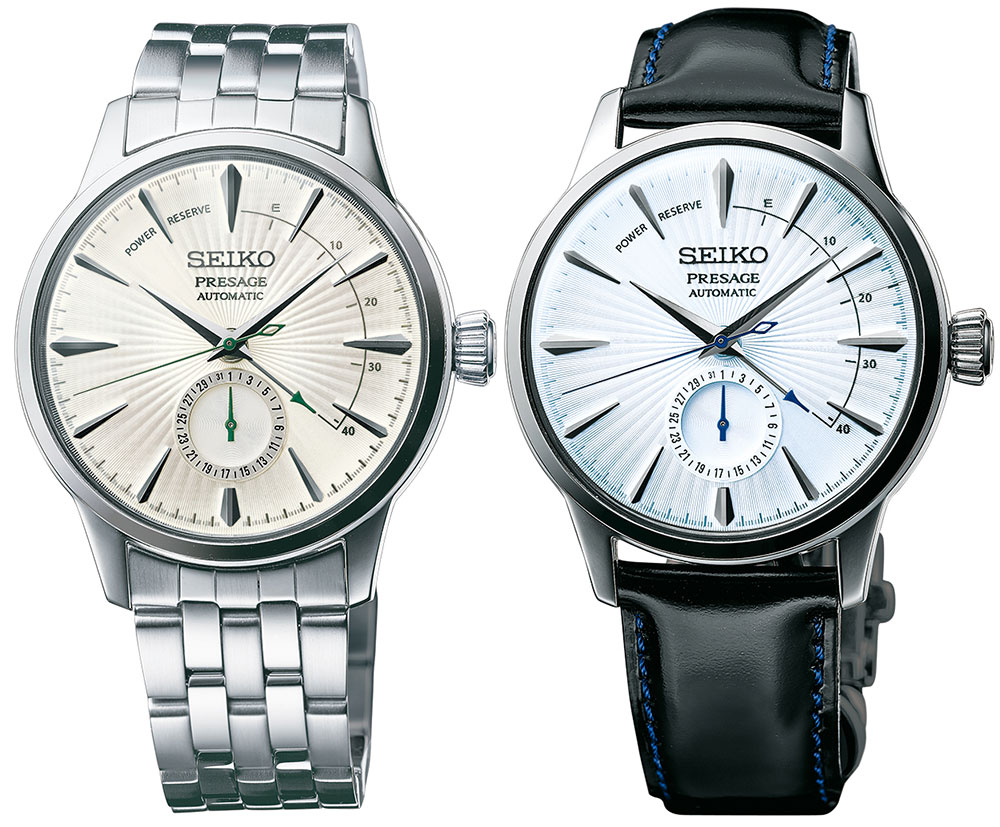 The best thing about these new Presage watches, however, is the price. Prices will begin at under $500, which represents tremendous value for what you get. Seiko watches are often very well crafted for their price and these watches look extremely well-designed. Watches in the Seiko Presage SRPB series will be priced between $425 and $495. The slightly more complex watches in the Seiko Presage SSA series will see prices at around $475 to $525. If you are looking for a dressier watch that doesn’t break the bank, these watches should be high on your list for consideration. seikowatches.com