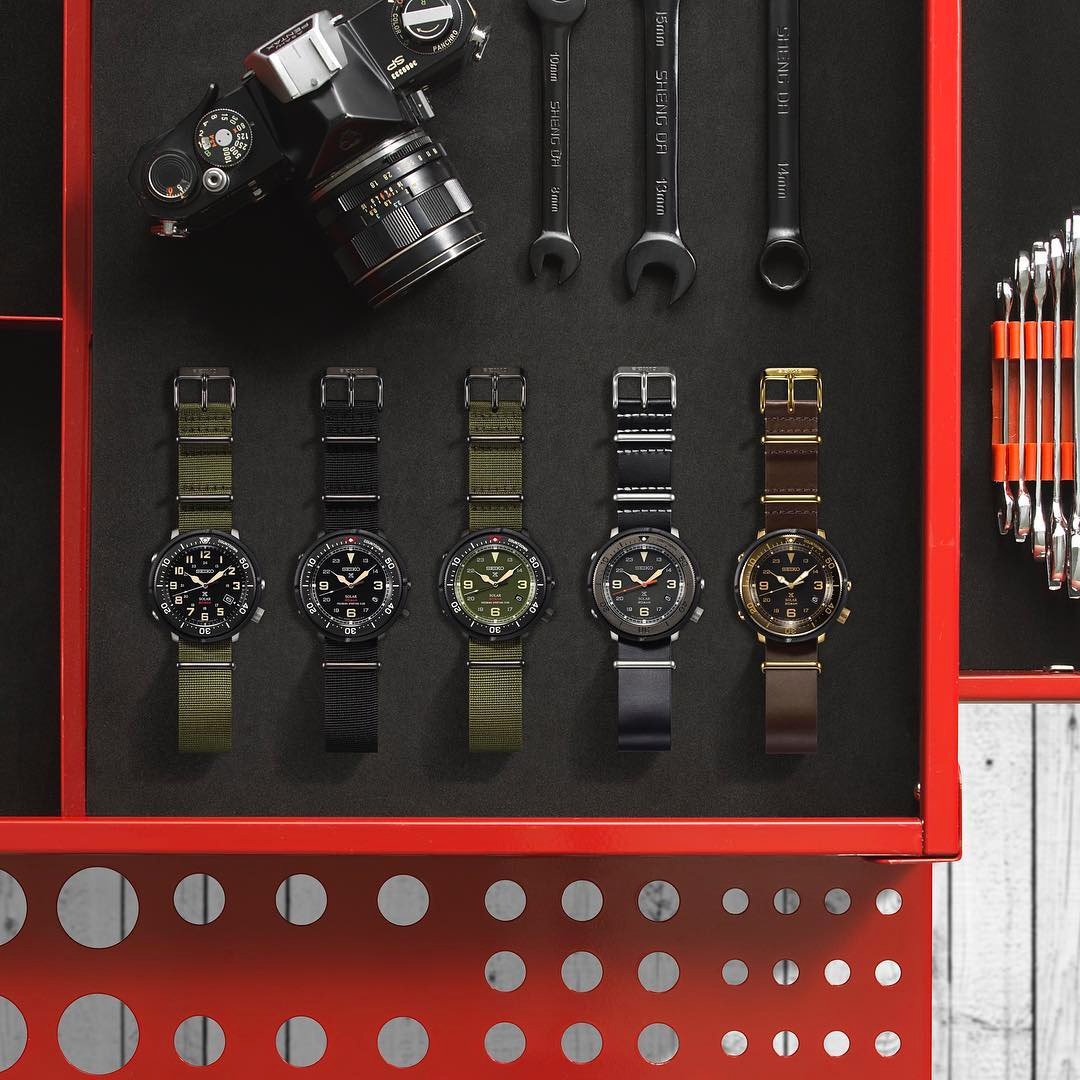 Unless you are Japanese or into Japanese culture and fashion, the name Lowercase might not mean anything significant to you. Lowercase is, in fact, a Japanese design and creative consulting firm that has worked with some of the biggest brands in the world like Nike, Disney, and Lego, to create campaigns in Japan. Now, they have teamed up with Seiko to produce a series of limited edition Seiko Prospex Fieldmaster Lowercase watches. 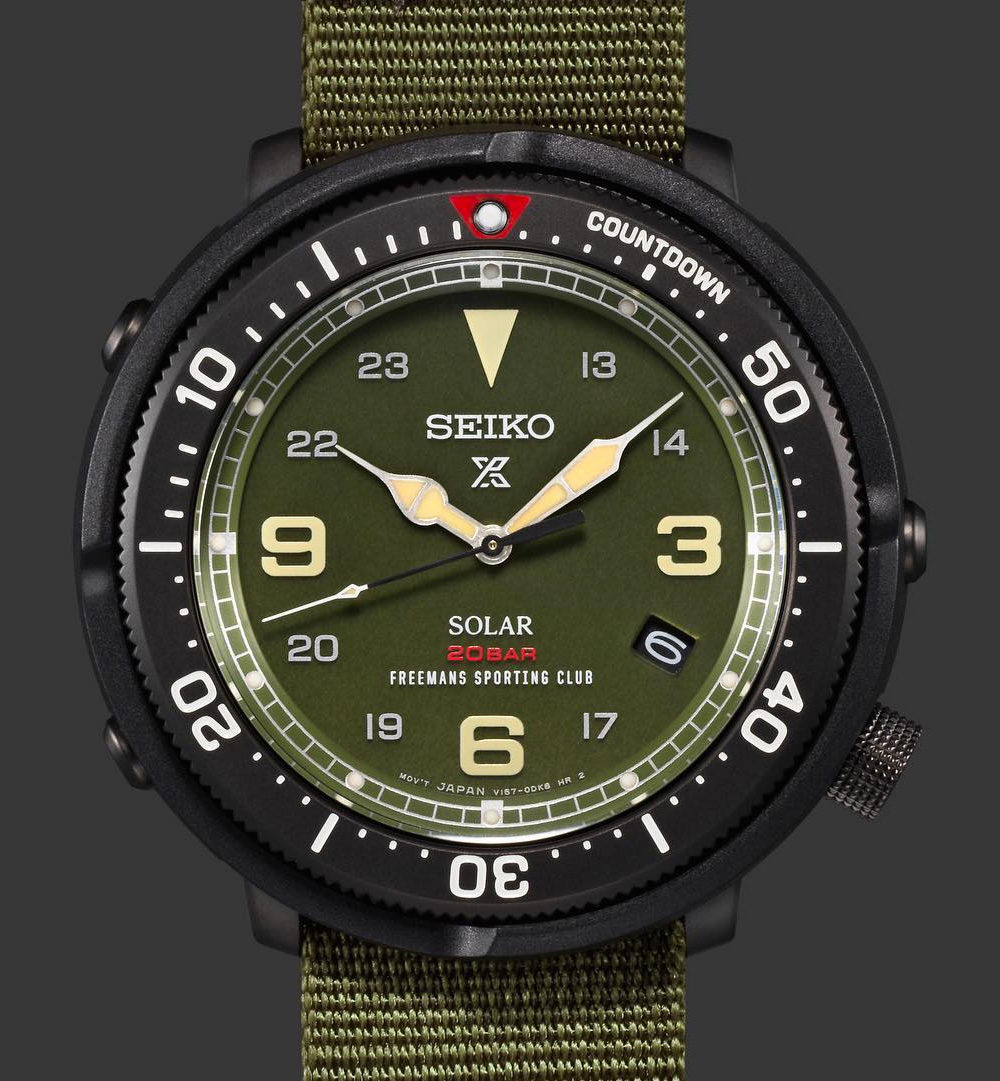 Seiko’s Prospex watches are essentially tool watches developed specially for professional use, hence the name being a portmanteau of professional + specifications. The entire collection is subdivided into Sea, Land, Sky, and Run. The watches that readers are probably most familiar with are the dive watches from the Sea collection. However, the Land collection has some pretty interesting models also. The Seiko Fieldmaster SBDC011, or “Field Tuna” as Seiko fans like to call it, is a hot favorite. It is an automatic watch that features a compass bezel and a brushed shroud similar to that on the Seiko dive watches that are also nicknamed “Tuna.” The new Prospex Fieldmaster Lowercase watches, however, are markedly different. 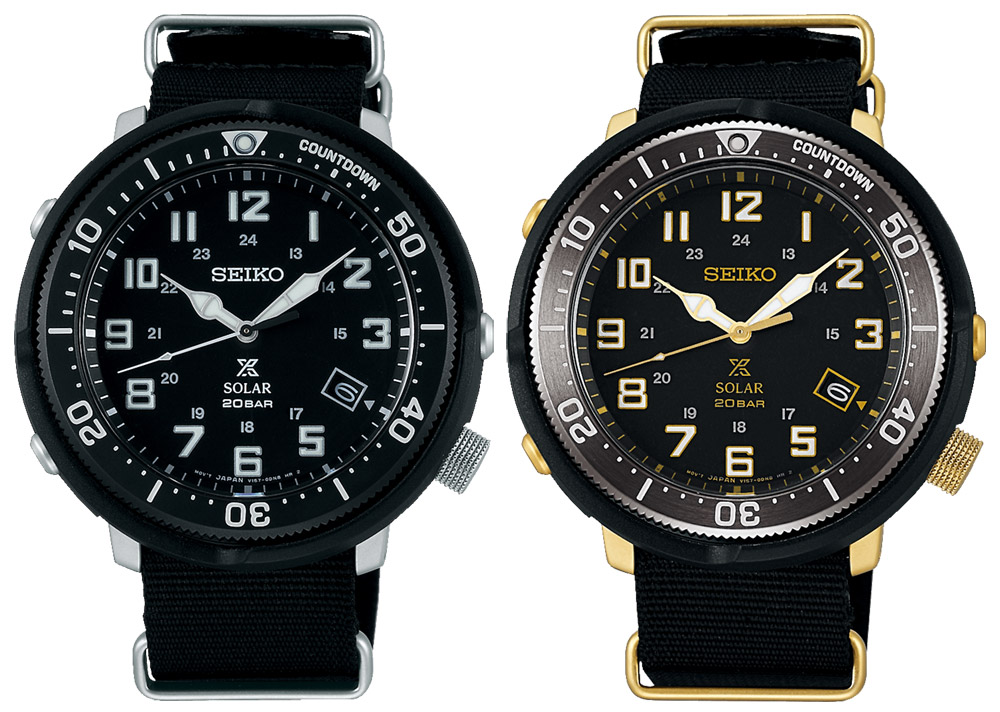 There are eight new Fieldmaster watches, and for a start, they are all quartz watches. Solar quartz watches, to be exact, because they can be powered by light. The overall styling of these eight watches is mostly similar, with the main differences being in the dial, case finishing, and strap that they come with. 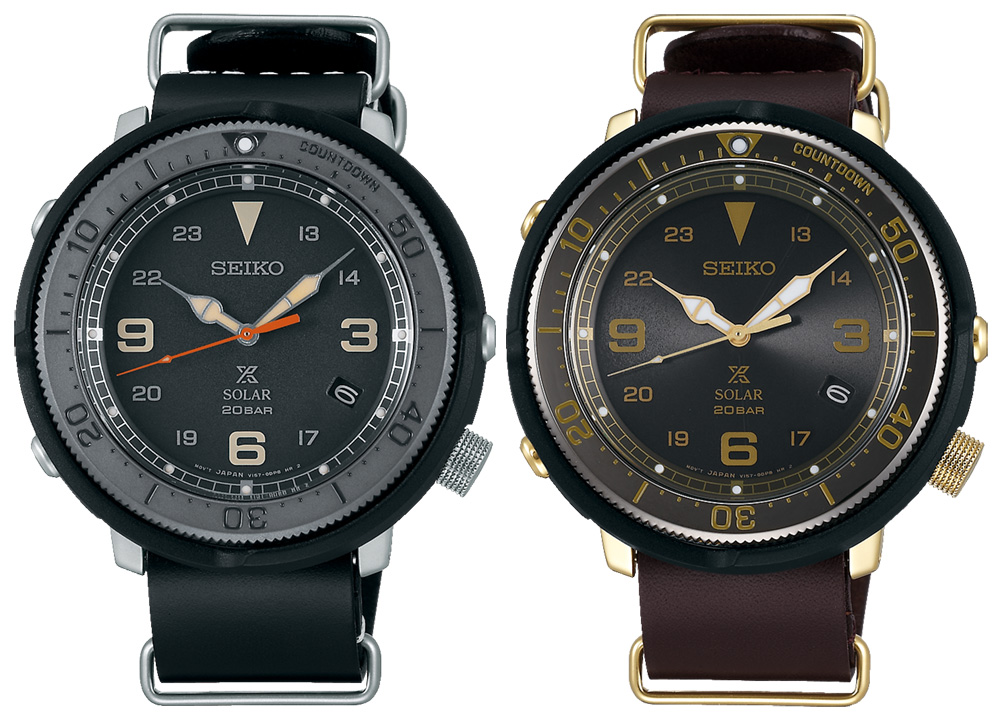 All eight models will come in 44mm black stainless steel cases with plastic protective shrouds. Water resistance for all models is 200m and all models are also powered by the Caliber V157, a solar-powered quartz movement. Seiko Watches Homepage says the movement is accurate to +/- 15 seconds a month and battery life is around 10 months when fully charged. 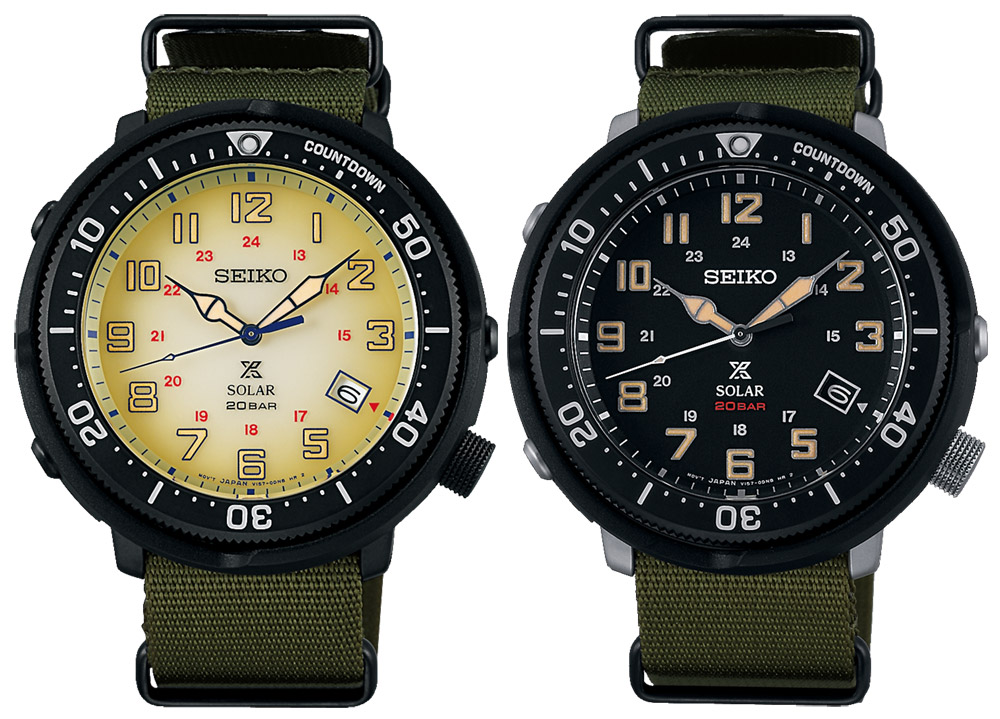 As befits the name Fieldmaster, these eight watches have a style that is appropriate for a field watch. Large cathedral hands and large hour markers ensure legibility, while a rotatable “countdown” bezel means wearers can use their Seiko Watches 4r36 Prospex Fieldmaster watches to time events of up to an hour. Some models even have 24-hour markers on the dial, making it easy for their owners to tell military time. All eight Seiko Prospex Fieldmaster Lowercase watches will come with rugged NATO-style fabric straps, except for two – the SBDJ031 and SBDJ032 – which will come with leather NATO-style straps.

Five of the eight models are limited-editions, some limited to 300 pieces and some to 700. And each of the limited editions is specifically for a Japanese retailer, with models for BEAMS (SBDJ031), the hip and fashionable Freemans Sporting Club (SBDJ023, 300 pieces; and SBDJ025, 700 pieces), United Arrows (SBDJ032, 300 pieces), and Journal Standard (SBDJ033, 700 pieces). 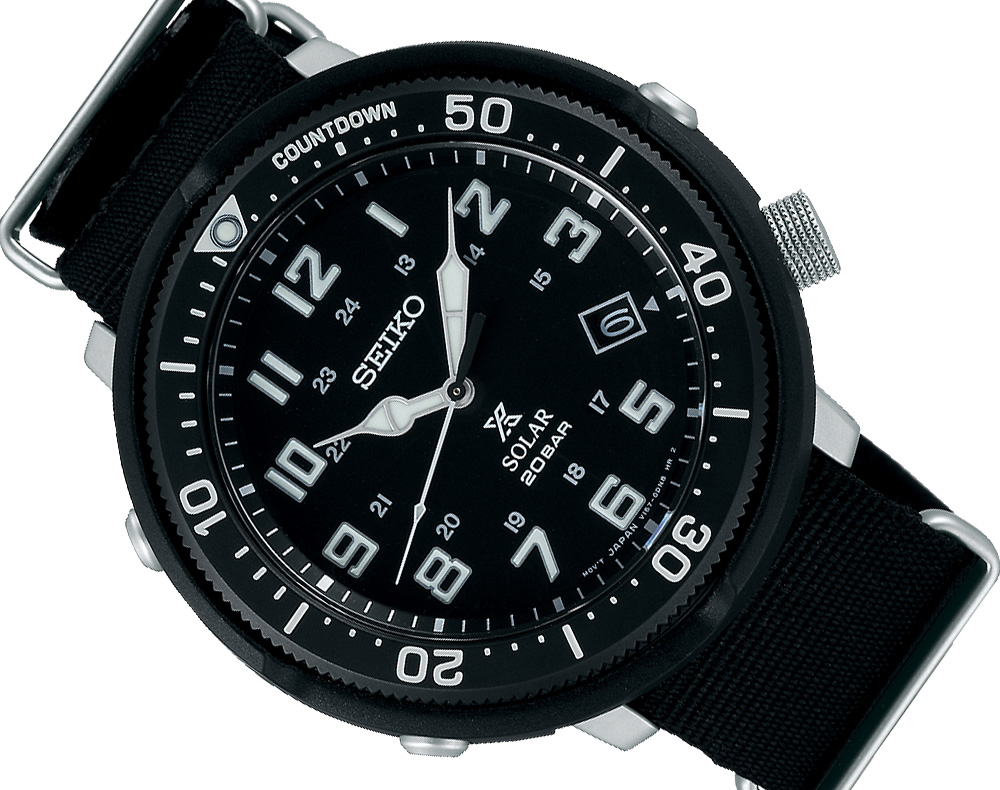 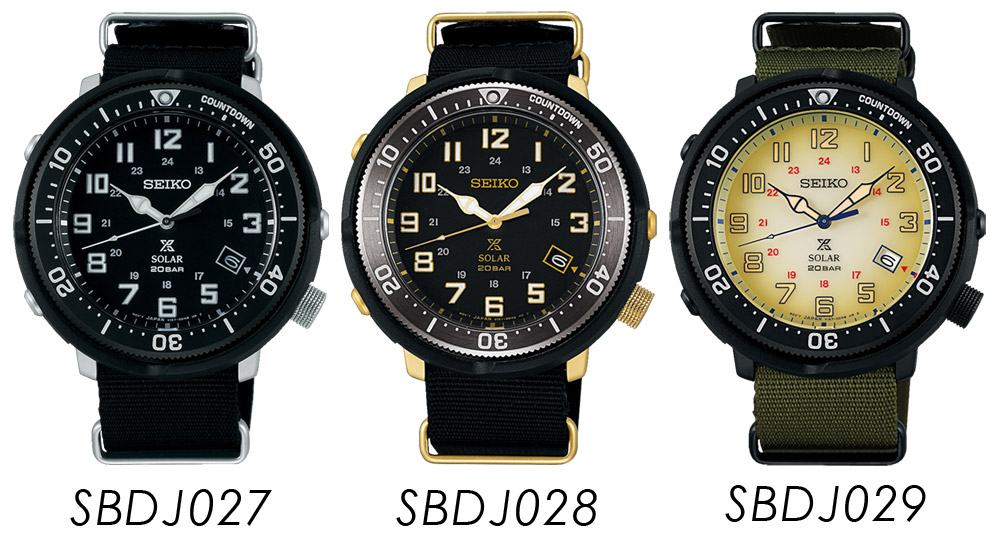 The SBDJ027, SBDJ028, and SBDJ029 are not exclusive to any retailer and are not limited by production number. Rather, they are limited in the sense that they will only be produced for a limited time. Seiko Watches Zalora doesn’t say for how long they will be available. 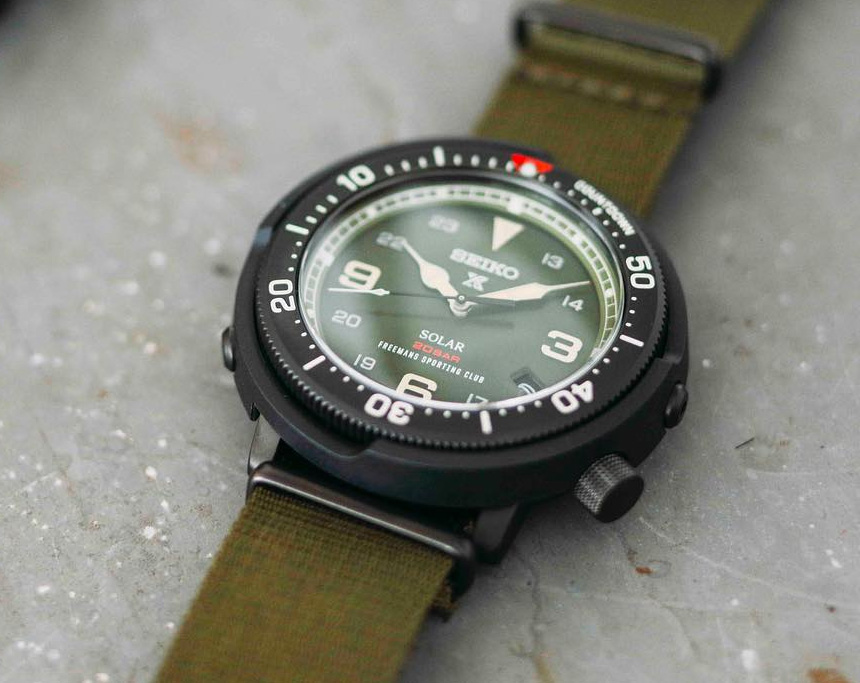 Seeing that five out of eight models are exclusive to Japanese retailers, it shouldn’t surprise you to hear that these models will be exclusive to Japan. One can only hope that this is only temporary and Seiko will offer some of the models overseas – at least the ones that aren’t exclusive to Japanese retailers. Still, it shouldn’t be hard for readers to source them from their favorite overseas sellers. The Freemans Sporting Club model will go on sale in September with the rest following in October 2017. Prices of the new Seiko Prospex Fieldmaster Lowercase watches will range between ¥37,000 and ¥45,000 (that’s about $340-$410 in USD at time of writing). seikowatches.com

What steals the show for us horology fans, however, and that which makes a visit into this boutique worth your time is the heavier bits. There are just three of specific note, starting with all the limited edition 10th Anniversary Spring Drive Chronograph GMT. The face is occupied but it satisfies this watch comfortably. The dial is a sort of pearlescent blue with rose gold hands and markers, complementing flecks of contrasting reddish on several dials and about the second hand. The ￡15,000 price tag might set some off balance, but the creation of those units is restricted to 500 which can help convince the right collectors. It’s worth and eye seeing from the flesh.The second show-stealer is a lot more modest in appearance, but much more dizzying in cost. At first glance, I must acknowledge that the Grand Seiko Spring Drive 8 Day Power Reserve (complete hands-on article here) doesn’t seem to be much and that I guess an untrained eye might not even break gaze to appreciate it. Seiko has a small but famous component of elite watchmakers known as The Micro Artist Studio. Their hand-made creations instantly turn into ownership ambitions of their horological purists and fans, and this particular invention is the first time that a Grand Seiko has come from this prestigious studio. The remarkable weight is down in part to the in-house movement that boasts 56 jewels and a 8 day (192 hours) energy book, complete with a gauge on the back. This motion is astonishingly true to within +.5 moments per day. It is just purchasable through Seiko stalls such as their new London house but will need deep pockets using a cost of approximately ￡50,000.