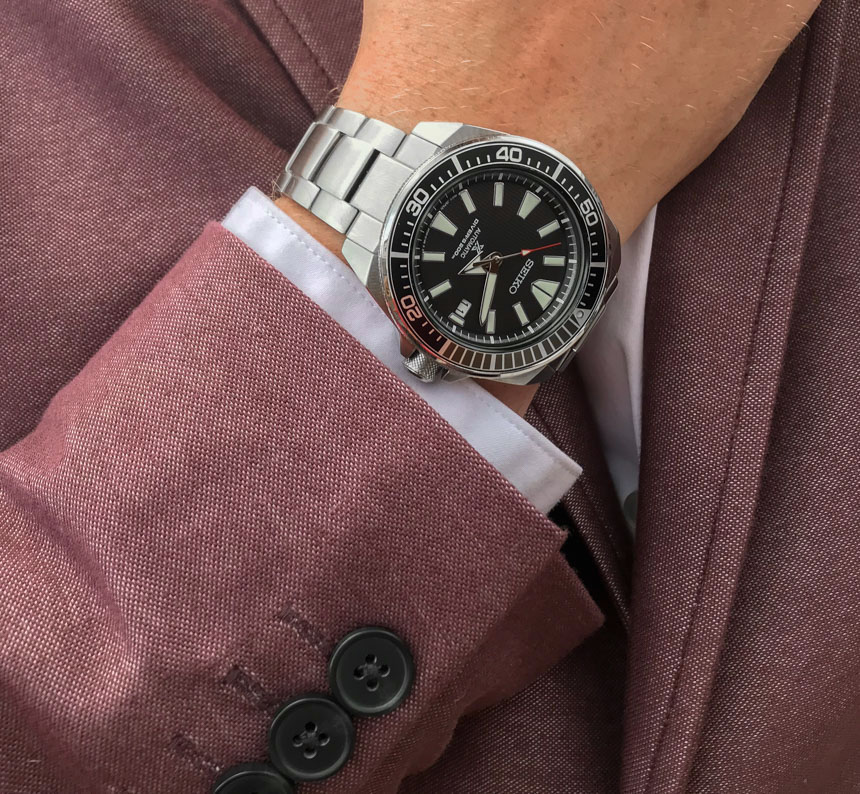 Seiko has recently released a line of Seiko Prospex Divers heavily inspired by 2004’s Seiko “Samurai.” The collection marks the non-limited-edition return of what’s arguably Seiko’s most sought after dive watch style. The chunky, yet handsome Seiko Prospex Samurai SRPB51 features a handful of dial options and brings back some features Seiko collectors have found most appealing about the brand’s divers – and it packs a lot of features in considering the relative affordability. 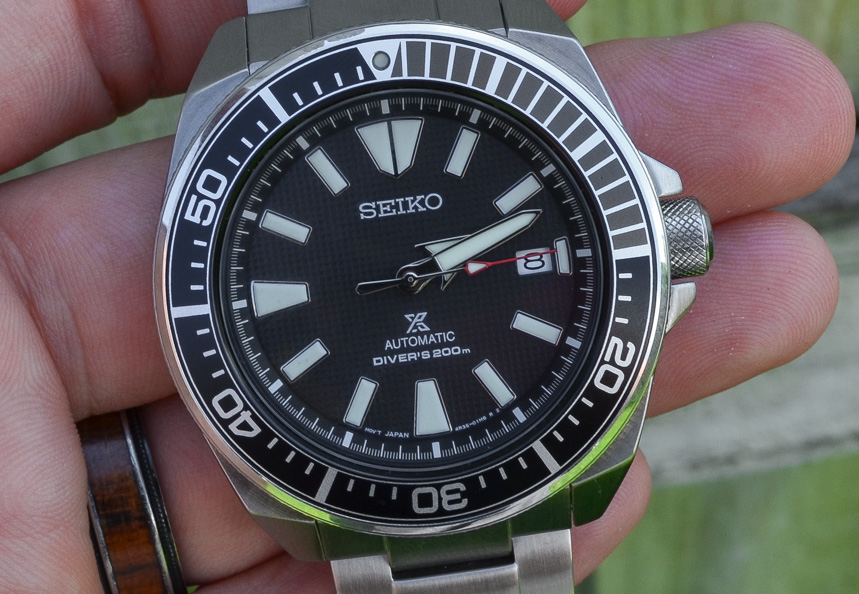 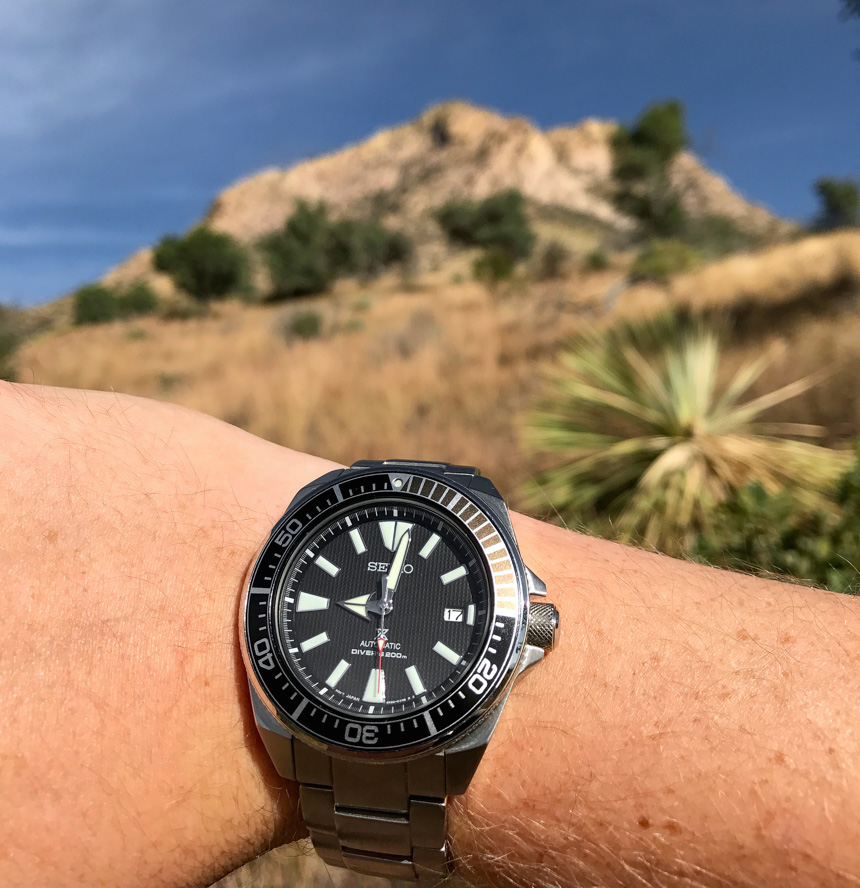 Seiko has always been one of the few brands that have a following that nicknames their watches and that’s something Seiko has adopted and eagerly catered to. The Seiko “Samurai” first made its appearance in 2004 and was quickly and aptly named after its hands, giving the vague appearance of a samurai sword. It was discontinued a few years later, however, but collectors have kept it circulating and appreciating ever since. The Seiko Prospex SRPB09 or “The Blue Lagoon” (Wrist Time Review here) was released in February of this year and quickly sold out before I could get my hands on one – much to my disappointment. A few weeks ago, Seiko released the “Orange Samurai,” giving a nod to the original SBDA005 from days past. Unfortunately, Orange isn’t a color scheme that catches my eye, despite Seiko making a number of “famous” pumpkin colored watches, so I passed. When I heard that Seiko was releasing another line of Prospex Divers with the Samurai handset, I was ecstatic. I settled on the SRPB51 – the black and grey model on a bracelet –and have barely taken it off my wrist since. 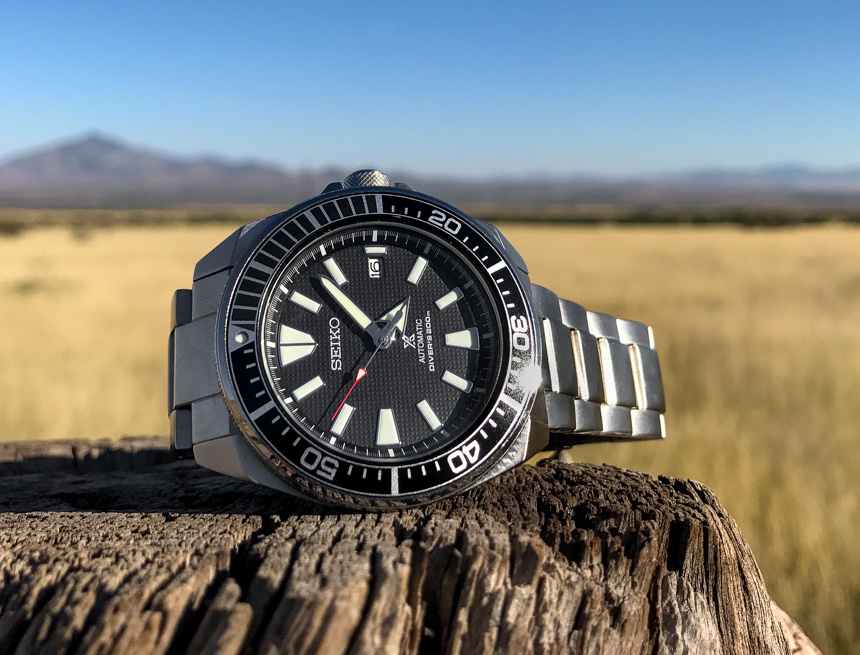 Seiko enthusiasts were first drawn to the Samurai for its unconventional, clean, bulky handset, and a titanium case and bracelet option (note: titanium isn’t available on these new iterations of the diver – they are only in steel). Unlike the many many dive watch options from Seiko, the Samurai has worn smaller and been a more refined timepiece – one that can be worn on serious dives or a night downtown. The angular and intentional lines of the Samurai put the model in a league of its own. The 2004 iteration had a boxier handset, but the more modern releases of the samurai have much cleaner lines and an updated hour hand shape. I feel that it brings an older concept to not only a potentially newer audience, but also caters to existing fans of the Seiko Samurai. 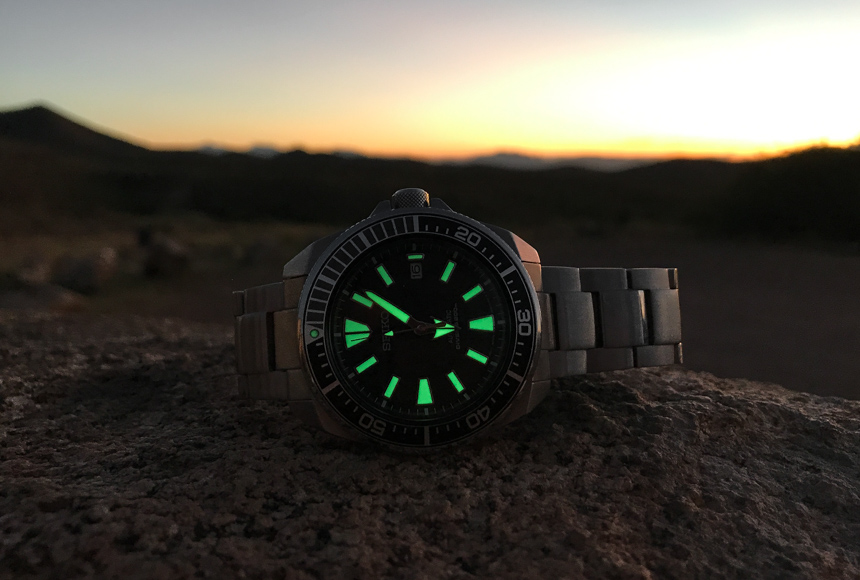 Let’s start with the case. Measuring in at 43.8mm, the stainless steel case fits just about perfectly. While almost 44mm seems large, the steeply tapered and thin lugs paired with the relative thinness (for a dive watch anyway) makes this a seriously compact piece – something that not all Seiko Watches Titanium divers can boast. It’s not too heavy and doesn’t twist off to the side of my wrist like many bracelet divers tend to do in this price range. The black and grey bezel insert has a lumed pip and is simply well finished. Updated from the older models are the minute indicators on the bezel being less round and “bubbly.” 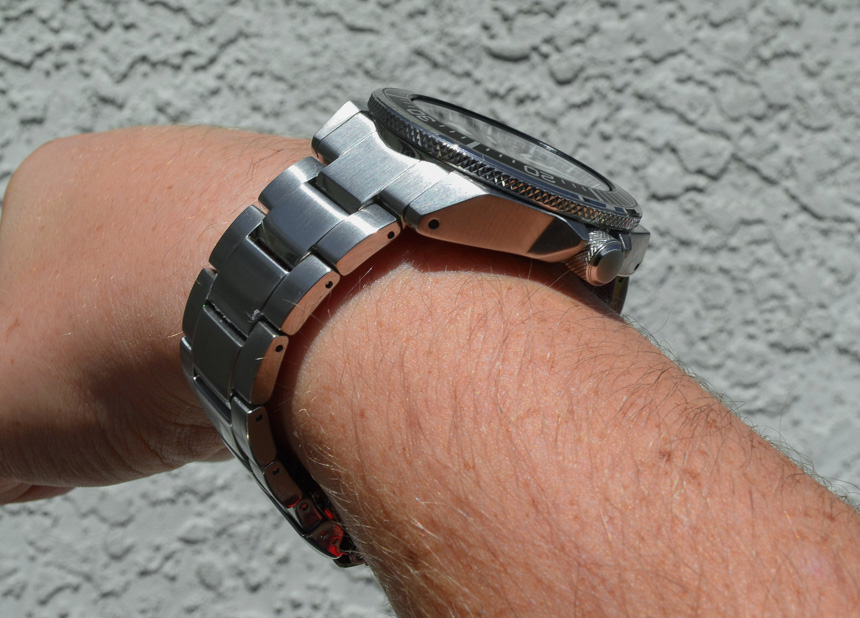 The hobnail design around the edge makes twisting and gripping much easier – a welcome feature that adds a touch of perceived quality and a neat nod to the original. The case is fully brushed minus a small polished gap on the opposite side of the crown, giving this a defined tool look. And on that front, paired with 200m of water resistance, this watch is a sturdy tool. During a hike, I fell and absolutely slammed the edge of the bezel against a cave wall and was dreading coming out to see the damage. When I finally got into the sun, there wasn’t even a scratch. In fact, I couldn’t even tell where I dinged it. 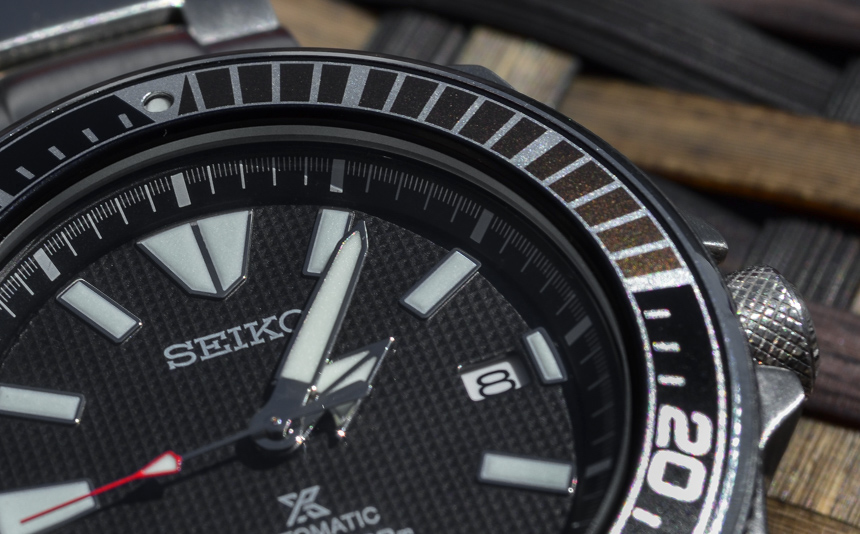 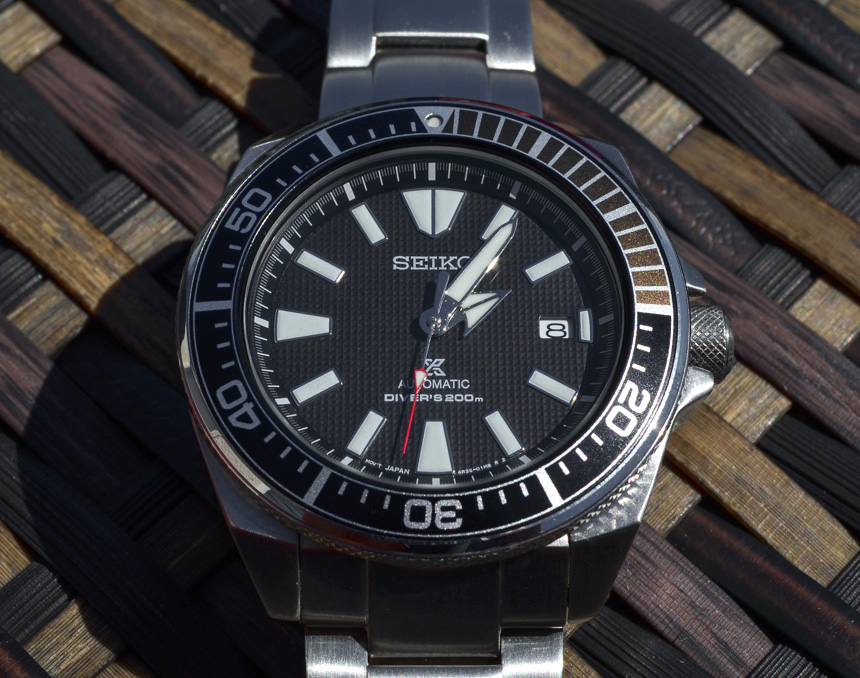 Aesthetically, this watch certainly isn’t boring. Like a proper dive watch, the unidirectional bezel insert features the first 15-minutes in grey instead of black, while the markers actually line up with the indices – something you would be surprised doesn’t happen as often as it should. The hobnail screw-down crown with realistically sized crown guards adds a nice touch that the original Samurai was lacking. The indices are superbly finished, and the crisp lines that pay homage to the original’s DNA put the little bow on the package. But the real stars of the show are the hands, which have been updated to fit the modern landscape. I mentioned earlier that the boxy and straight design has been replaced with a cleaner, polished handset. Gone is the seconds hand with (what I feel) is an awkward lumed box for a pointer, and included is a thin, classy spear-tipped hand with a smaller luminescent indicator. 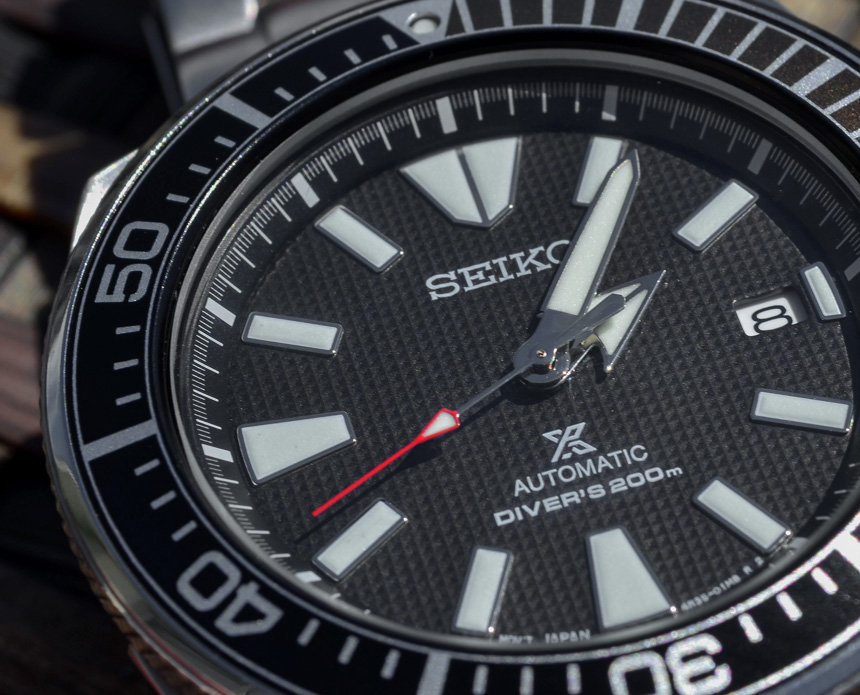 The clasp is among my favourite features of the diver. It’s a three-fold grip, but comes with a branded secure lock button, providing a very sharp and secure appearance and feel to the already “tool-y” watch. An extra feature is its micro-adjustments along with both ends of the clasp allowing for a snug (but not too snug) match whether you are sporting this on a bare wrist or using a wetsuit. Being left handed myself, I wear my watches in my right wrist, and gravity will pull larger watches hard against my ulna. The micro adjustments allow for some breathing room if I know my wrist will be swollen during strenuous tasks, and mitigate the unnecessary aggravation from hikes, swims, or increases. Wearers will just have to get prepared in advance, as producing those adjustments “in the area” is not the simplest task.Overall, the Seiko Watches Kinetic Perpetual Prospex Diver SRPB51 is merely a fantastic offering. While I do have some protest concerning the crystal, it would not discourage me from picking this up watch again. It’s a great addition for lovers of the first Samurai, and also the modern upgrade to the motion and aesthetics makes it a serious contender for a reasonable tool watch which also looks awesome.The Seiko Prospex Diver SRPB51 is available today through Seiko, and features a $525 price point on the steel bracelet, and $495 about the rubber strap. The Grand Seiko Hi-Beat 36,000 GMT watches out of a few years back were a hit, and especially the limited edition SBGJ005 with a green orange and dial GMT hand. The winning style and prevalence of that particular version proved too powerful for Grand Seiko to dismiss, so it is back with the same colours for the exact same underlying watch model, but with a different therapy and texture for the dial. The Grand Seiko Hi-Beat 36000 GMT Limited Edition SBGJ227 for 2017 features a radial pattern that kind of looks like a wicker weave, but that the manufacturer says is supposed to reference a peacock’s tail. Perhaps most importantly, however, is that it is somewhat more accessible than its predecessor in terms of both price and accessibility. 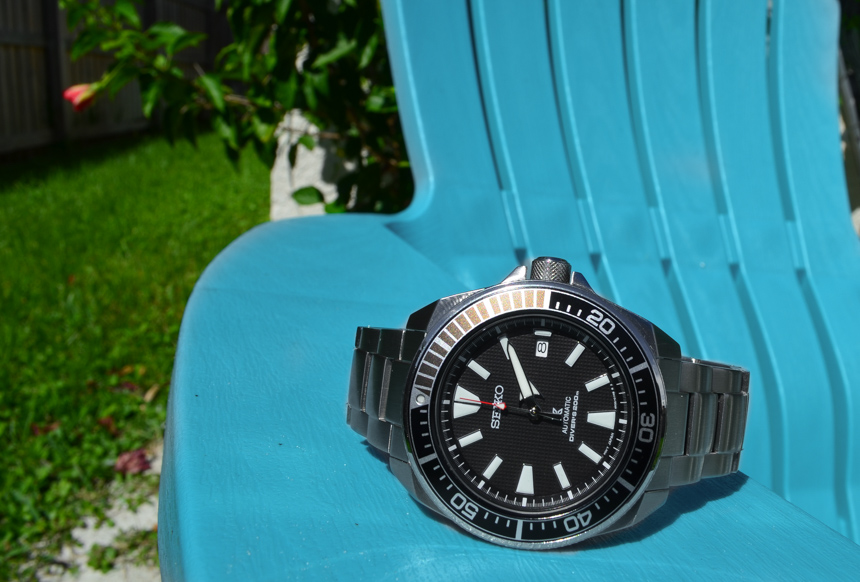 Something this handset boasts that isn’t even in the newer iterations of the Samurai is a polished handset. Personally, I love them. Besides water resistance, legibility is arguably the most important aspect of a dive watch, and the thick, bold hands and indices make this among the most legible watches in my collection. During the day, the Clou de Paris texture of the dial really makes the hands and indices pop. The clean polished hands against the matte square textures simply make it easier to tell the time at any angle. With previous models having brushed hands, the polish on the SRPB51 looks a lot more defined.