With beautiful Patek Philippe complications and supercomplications that defy the humanly possible, it is the Grand Cru of the watchmaking terroir and among the most sought-after brands around the collector circuit.Now in its 176th year and at the hands of some fourth generation Stern relative, Patek likes to showcase the fact that it is the last family-owned independent Genevan watchmaker, free of the limitations of shareholders and consequently able to pursue the route it deems fit. Being the best is tough work, but Patek Philippe watches never don’t surprise. Following the sale of theGraves Supercomplication, abandoned, last November at Sotheby’s Geneva for $24 million, it became the most expensive pocket view on Earth. Called the Mona Lisa of horology, this was the second time in the rodeo for this particular pocket watch, which had surfaced in 1999 and sold for $11 million, establishing a world record at that time. However, if you’re Patek Philippe, then you don’t rest on your laurels, also 24 complications are an invitation to produce more.In the mid-1980s, the Maison decided to outshine the Graves Supercomplication having an even more complex timepiece known as Calibre 89, high of post. Even a horological behemoth with 33 complications, 24 palms and 1,728 parts, Calibre 89 now occupies the podium since the world’s most complex pocket watch and was built to celebrate the watchmaker’s 150th anniversary. To mark its 175th anniversary this past year, the Patek Philippe Grandmaster Chime, has been unveiled, currently the world’s most complicated wristwatch with 20 complications.

It seems just like yesterday but the Patek Philippe ref. 5270 chronograph with perpetual calendar was introduced in 2011, and has been available in nearly a dozen variations in that span (including the duo with the infamous “chin” on the dial”).

Now all versions of the ref. 5270 on leather strap have been discontinued – they met with middling commercial success – and replaced with something that’s sure to be a hit with traditionally inclined enthusiasts: the ref. 5270P-001 with “salmon” dial.

With this Patek Philippe is given collectors what they have been asking for, at least going by the large premiums placed on salmon-dial chronographs on the secondary market. While the new ref. 5270 is fundamentally identical to the earlier ref. 5270s, the new model has a dial that’s a major departure, at least by Patek Philippe standards, from the old.

The “salmon” colour, or “golden opaline” as Patek Philippe labels it, has always been a popular colour, but historically found only on custom dials (like those for Eric Clapton), limited editions (as with the 175th Anniversary London Grand Exhibition watches), or the priciest complications (the ref. 5101P 10-Day Tourbillon for instance). The new ref. 5270 makes the colour significantly more accessible, though perhaps some owners of expensive salmon dials watches might be lukewarm to the new launch. 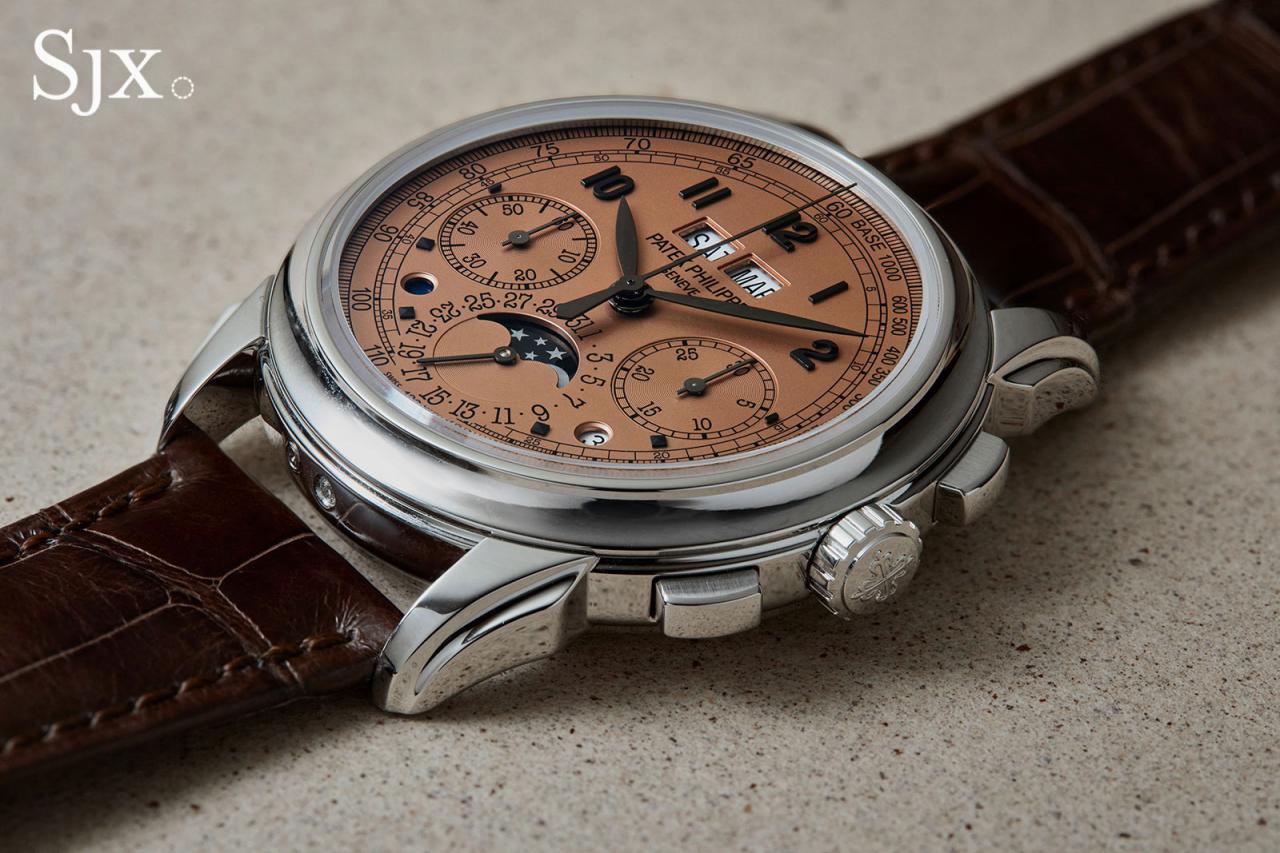 Notably, the new ref. 5270P-001 replaces all earlier versions of the ref. 5270 on leather strap, including the 18k gold models. In the latest catalogue, the only other version available is the ref. 5270/1R-001, which is in rose gold with a matching rose gold bracelet. 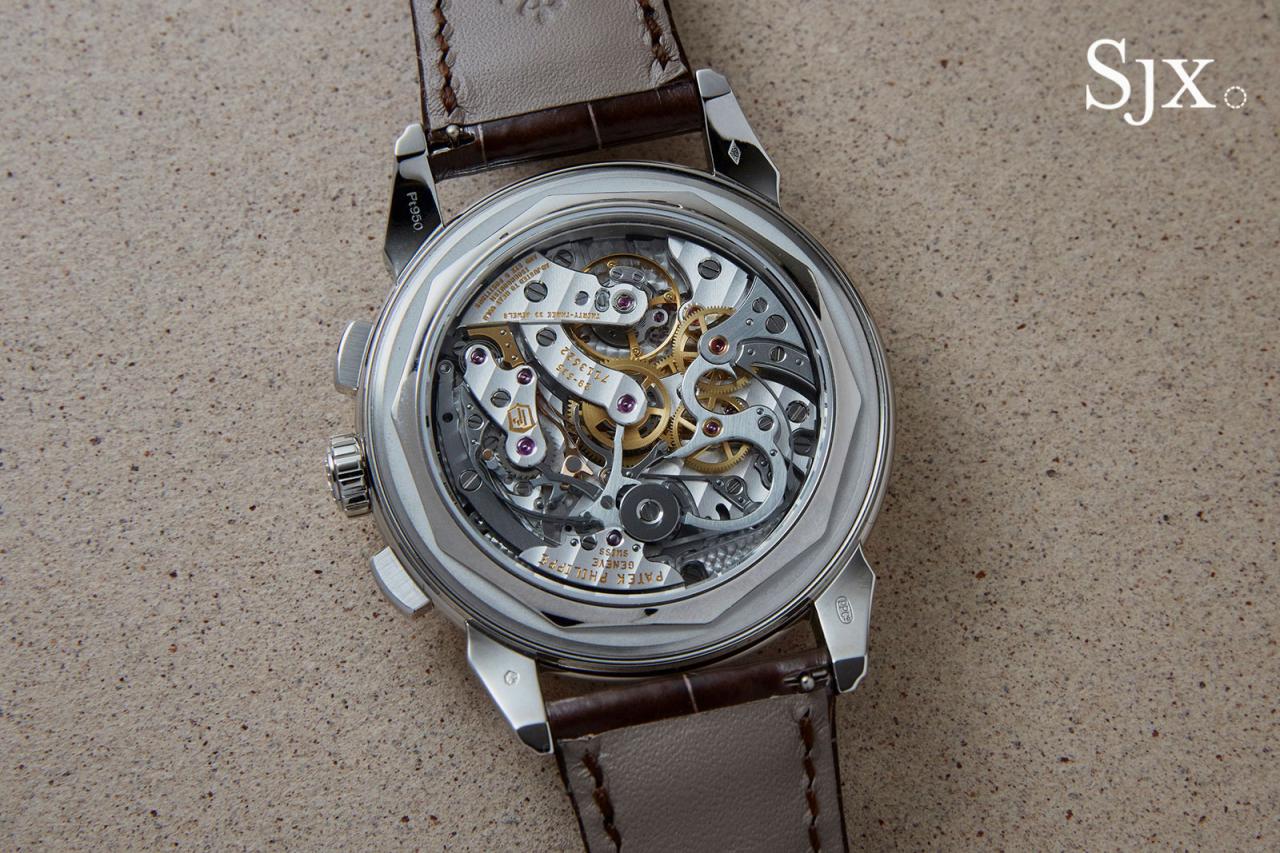 And its other novel element are the Arabic numerals for the hour markers, something that was last found, at least on a regular production model, on the ref. 5004 split-seconds chronograph with perpetual calendar. 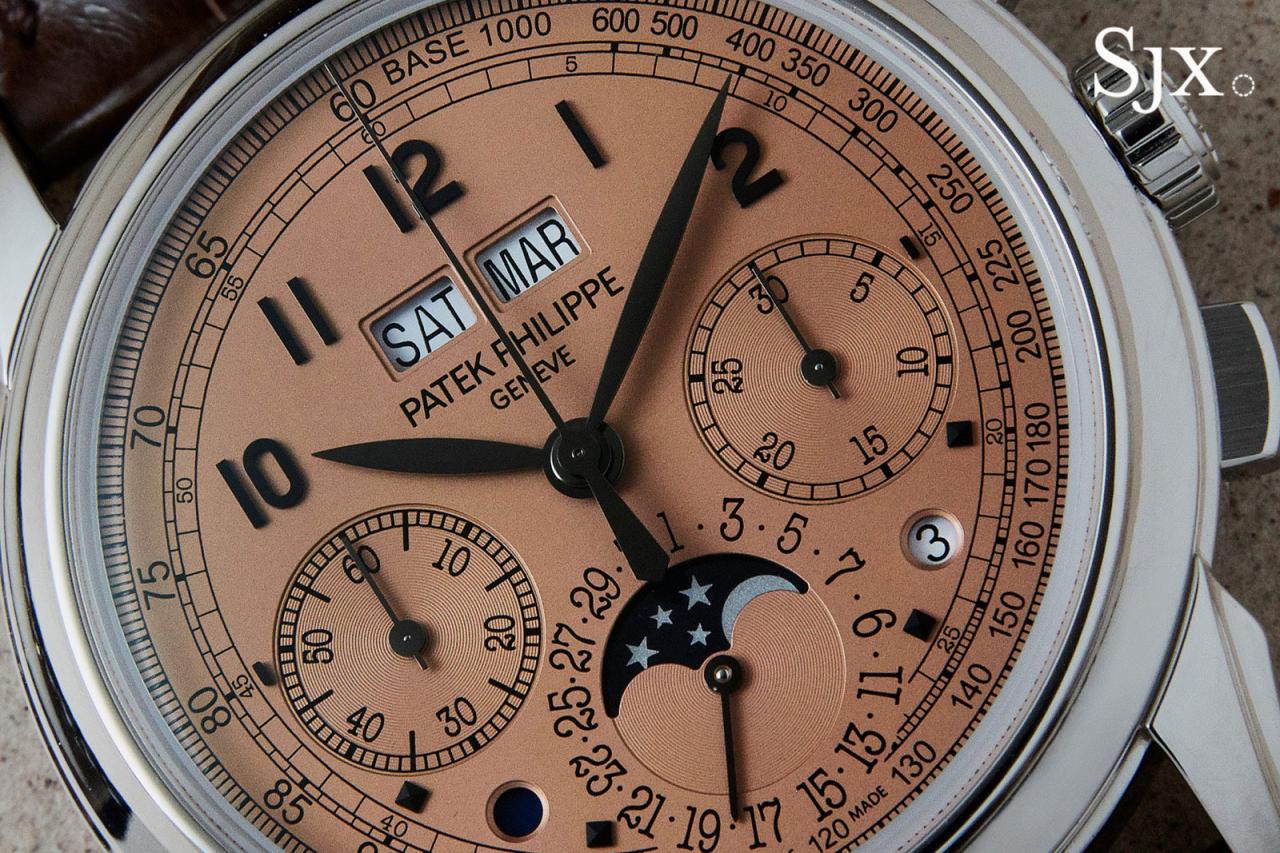 As with past Patek Philippe watches with salmon dials, the hands and hour markers on the new ref. 5270P are in blackened gold. Design-wise, the rest of the dial is the same as the outgoing versions. 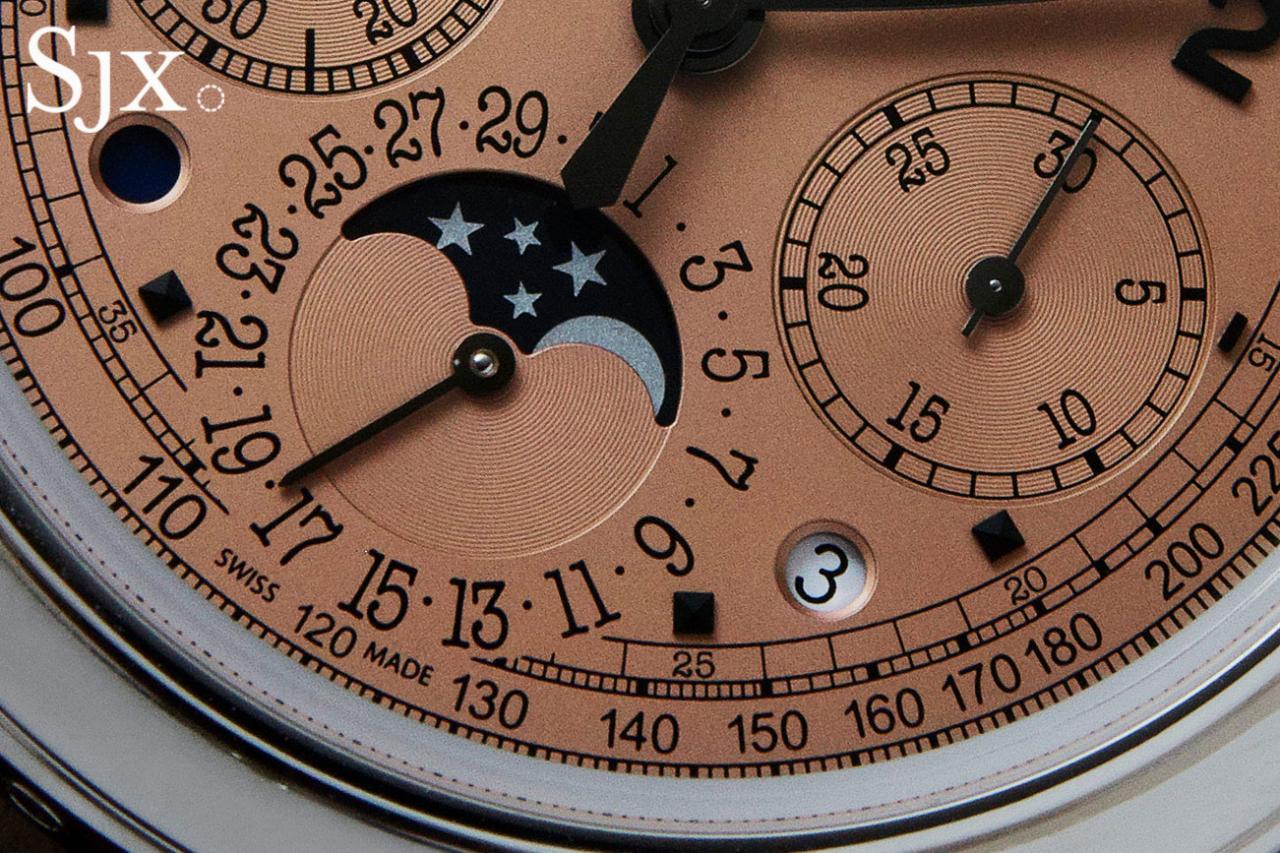 The platinum case is also available for the first time without diamonds, but size-wise it is identical to the gold models. Its diameter is 41mm, and height is 12.4mm.

It retains the signature flared lugs of the ref. 5270, which are beautifully shaped and probably the most overlooked feature of the watch. 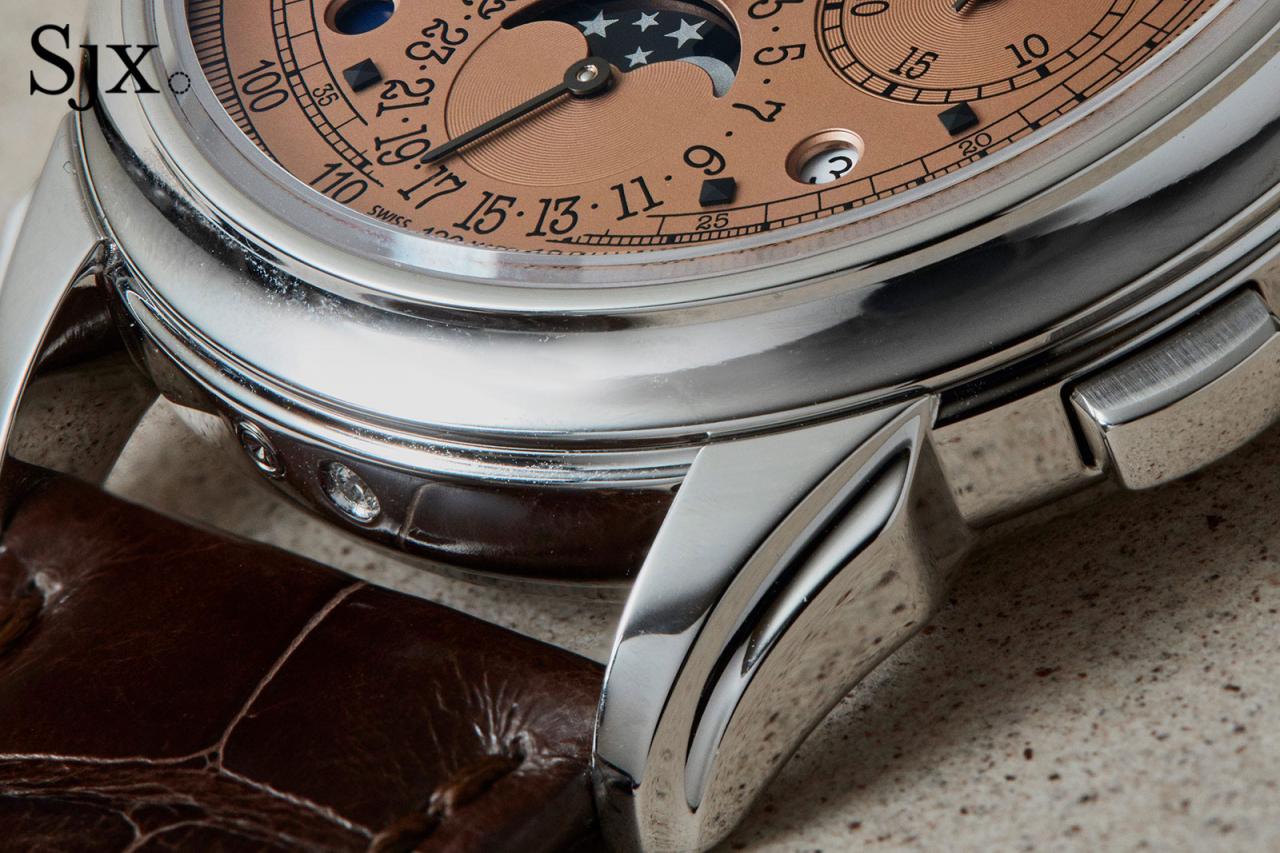 The diamond in-between the lugs at six o’clock found on all platinum Patek Philippe cases.

And the CH 29-535 PS Q is again stock with the usual specs: hand-wound, 65-hour power reserve, and Gyromax balance wheel. 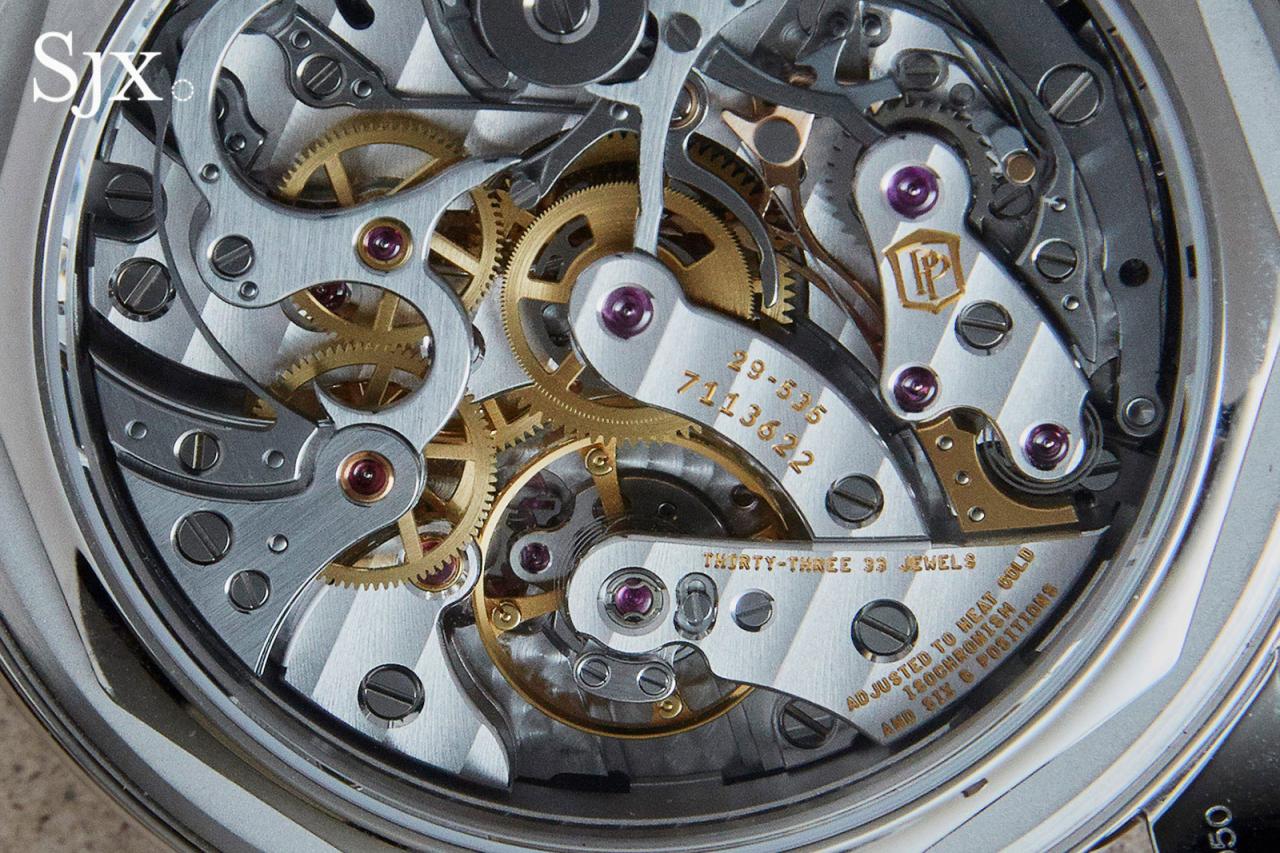