The Piaget Emperador Coussin XL limited edition watch was displayed at Watches and Wonders.This watch is similiar to Piaget’s Altiplano 900P watch, the thinnest mechanical watch in the world.But this watch also has its uniqueness, let’s take a look. 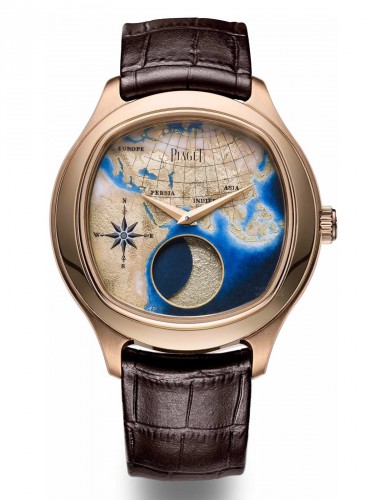 The first thing to note about the watch is that it isn’t a world timepiece, there’re no side pushers to advance the hour hand and indeed no city ring or other indication systems that shows the time across the globe. The more eagle eyed of readers will also have spotted that the world map on this dial isn’t the actual world in its entirety, rather a portion of it. There’s no Americas on this map and only a slice of Africa. The map on the watch also isn’t detailed enough to use for any sort of real navigation purposes, despite the compass at roughly half past eight on the dial. The map represents the journey that silk would take across Asia to Europe which would come to form a very important link between the beautiful Italian floating city of Venice and the city of Samarkand Uzbekistan. If you aren’t entirely sure where that is on the dial, follow the line that goes through the middle of the Caspian Sea, the lake above the letters I and A in the word Persia. Where that line intersects with the vertical line going through the A in Piaget is roughly where the city of Samarkand is. Roughly. 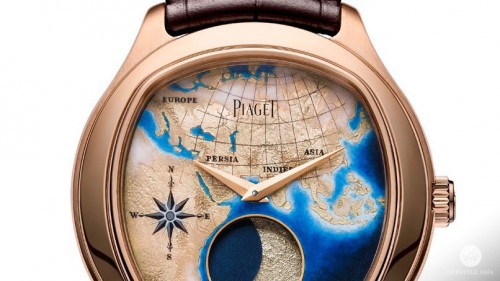 The dial is made using a technique called champlevé enamelling, with the map and the windrogse nautical compass being painted by hand. At the 6 O’clock position is the moonphase indicator which uses a rotating mask moving across a second golden disk to represent the moon’s passage through the sky. The driving wheel for this complication has 135 teeth in total and thanks to fine gear the moonphase change itself will only vary by one day over 122 years. Piaget Emperador Coussin XL limited edition watch also makes use of dauphine style hands which happen to be my favourite as they add great depth to a dial and their beautifully delicate tapering towards the edge of the dial gives a touch of elegance like no other. 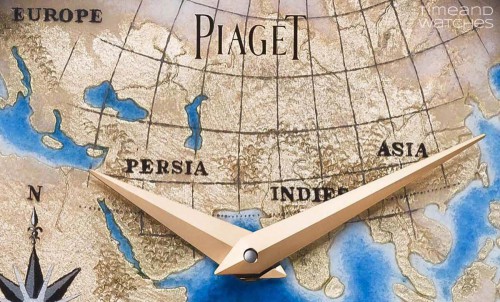 The automatic winding Piaget 860P movement in this watch lasts for a total of 72 hours before it needs to be re-wound, making it a good choice for a smart watch which you can put away in the safe while you take a round skiing trip for the weekend. The automatic rotor bears Piaget’s coat of arms and the rotor and mainplate have been circular turned finish. The case of the watch is made of rose gold and is 46.5mm in diameter and is presented on a black leather strap.